The Man Of The Woods Tour, Cleveland, OH, EE.UU. +35 imágenes 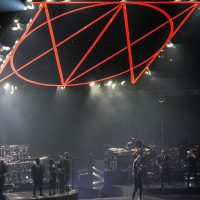 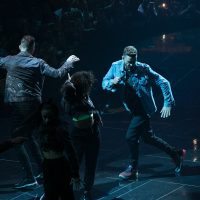 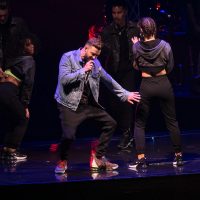 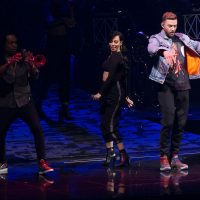 Justin Timberlake puts the moves – and the sounds – on The Q

Wanna know how words get made up? Go to a Justin Timberlake show.

When the former Mousketeer’s «Man of the Woods» tour stopped at Quicken Loans Arena Tuesday night, it wasn’t quite a concert. There was way too much dancing and theatrics for that.

But it wasn’t quite a dance recital or a revue, either. There was way too much singing for that.

Ah, here we go: The two-hour sensory blitzkrieg, featuring a serpentine stage that spanned the width of The Q floor, laser lights and a stunning collection of musicians, was a «concital».

That’s never going to get past Merriam Webster or the even tougher judges, copy editors at The Plain Dealer. But dang it, that’s what it was.

The gifted Timberlake has the moves of Michael Jackson, the charisma of Cary Grant and the aww shucks of Mickey Rooney’s Andy Hardy. Not that anyone from this era knows who that is. Look it up, you whippersnappers. It’s the truth.

Timberlake is just a guy you WANT to hang around. He comes off as genuine, which is really rare in this era, sad to say. For one thing, he didn’t just introduce his cadre of backup singers during an acoustic set (complete with blazing campfire, and I swear a chigger or two). Nope, they all got chances to really showcase their vocals, with songs ranging from Fleetwood Mac’s Dreams to Lauryn Hill’s «Ex-Factor» to the Beatles’ «Come Together» and even John Denver’s «Thank God I’m a Country Boy». They are so good that they easily could have upstaged him, and not too many artists would be willing to take that risk.

But more to the point is his personality. We’ve all seen his «Saturday Night Live» skits, and his movies. He’s droll, hilarious and gifted. Shoot, I heard a joke the other day that he was disappointed that his wife, Jessica Biel, wouldn’t let him name one of their kids Batmo, so he could call him Batmo Biel. Even the late Adam West is laughing at that one. Now honestly, I don’t know if it’s a true story, or if it’s just apocryphal. But it SOUNDS like the guy who kept a sold-out Q – including a skeptical music critic — happy and entertained for all that time.

The show wasn’t perfect. In the beginning, Timberlake’s vocals were so muddled as to make me wonder if he was channeling his inner Marcel Marceau (that’s another one you whippersnappers should go look up, because a mime is a terrible thing to waste). That got better as the night wore on. I have a theory about that: They do soundchecks to an empty arena, so naturally it rings and such. But 20,000 singing, dancing, hootin’ and hollerin’ warm bodies in the room tend to absorb the nuances.

You can, if you like, find fault with some of the singing in songs like «Filthy», «Lovestoned«, «SexyBack» and «Mirrors«. But others – «Suit & Tie«, «Cry me a River«, «Drink You Away» and especially «Morning Light» (a song he co-wrote with country’s Chris Stapleton that sounds like it could have been a lost Marvin Gaye track) were nothing short of stellar.

OK, so the guy can sing. But man, can he dance! What was amazing wasn’t so much how good he was with his six backup dancers – although he was tremendous in some seriously fast-paced choreography. No, the highlight was a solo spot where he became Fred Astaire and turned a microphone stand into Ginger Rogers. And dang it, those are two more names you youngsters need to get off my lawn and go look up.

Francesco Yates, a young Canadian singer-songwriter who has similar dance moves, and plays a pretty wicked guitar, opened with a half-hour set that showcased a multi-octave vocal range that could almost rival Beverly Sills’. The difference is that Yates’ «soprano» was really a falsetto, but it was so pure that only Sills might know. And on top of that, he was able to impart a deliciously nasty rasp from time to time that moved it from aria to rant.

What? Who’s Beverly Sills? Trust me, in her day, she gave a heck of a concital.

Cleveland — For the second time this year, Justin Timberlake performed at Quicken Loans Arena. And, for the second time, he proved why he is one of the greatest entertainers of his generation.

The thing of it is, Tuesday’s tour stop wasn’t even Timberlake at his best. The show came in support his 2018 album «Man of the Woods», which fails to capture the fresh vibe of previous gems like «FutureSex/LoveSounds» and «The 20/20 Experience».

Still, you have to admire JT’s commitment to his latest batch of songs. The second leg of «The Man of the Woods Tour» (he stopped in Cleveland this past March) kicked off with lively renditions of «Filthy» and «Midnight Summer Jam» — the first two songs on «Man of the Woods».

The two tracks (produced by Timbaland and the Neptunes, respectively) carried enough bounce to fulfill anticipation in the mostly full arena (The show in March was a firm sellout). Even if it wasn’t the big number opening some fans expected.

Timberlake wisely moved things to more familiar territory from there, tackling fan favorites like «LoveStoned» and «Senorita», while mixing in more subdued newbies like «Higher and Higher». But it was the familiar sounds of «SexyBack» that really got the show going.

Whether it was your favorite setlist or not, Timberlake kept you on your toes. His tour might be called «Man of the Woods» but Justin Timberlake is a performer built to rule an arena. His stage wrapped around much of The Q’s floor, making those even with modest seats feel like they were an integral part of the show.

Timberlake also pulled out some awesome tricks. The dance intro and microphone spins during the opening of «Suit & Tie» were epic. Later on, the playing of a sample machine on «My Love» took hold of the crowd. Then came the singalong to «Mirrors», which would have been an thrilling way to end the show.

It also helps that Timberlake has long performed with a full backing of drums, guitars and quite the horn section. That allowed some of his most well-known to transform into something new. Unfortunately, when the band unplugged, the show fell flat.

Midway through, a screen dropped down to play an overly long art piece that felt like a commercial for safe sex. Timberlake and his backing musicians then gathered around a campfire. No doubt, many would pay top dollar to see such a showcase in a more intimate setting. Just maybe not in an arena.

It wasn’t exactly boring. It just brought the show’s momentum to a halt as Timberlake’s backup singers took the lead on acoustic covers of Fleetwood Mac’s «Dreams», «Ex-Factor», «Come Together» and «Thank God I’m a Country Boy».

Perhaps knowing he had to kick the energy up a notch (or ten), Justin Timberlake delivered funk’d out versions of «Summer Love» and «Rock Your Body». In case you forgot, Timberlake can sing, dance and play guitar. If he had the time, he could probably take your ticket at the entrance, hand you a beer and get you fitted for merchandise without missing a note.

The show closed out with a drum-happy rendition of his first solo hit «Like I Love You», which still sound as awesome as it did back in the post-NSYNC world of 2002, and the celebratory «Can’t Stop the Feeling!»

For anyone who attended both Justin Timberlake shows this year, you got pretty much the same show, only no cameo from LeBron James. Though, Cleveland Browns quarterback Baker Mayfield was in attendance.

Depending on your feelings for the «Man of the Woods» album, a portion of the show might have been a hard pill to swallow. Thankfully, Timberlake’s dance moves and charisma felt like a fresh glass of water to wash it down.