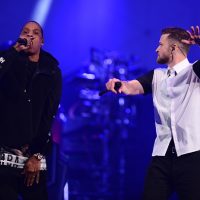 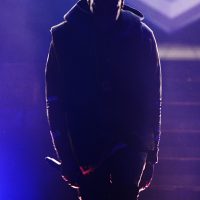 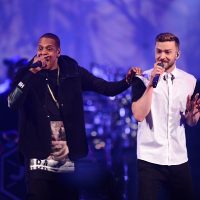 Justin Timberlake’s ’20/20 Experience’ Returns To Barclays
Vibe — Twenty-four hours after rocking a poop emoji mask at Taylor Swift’s 25th birthday, Justin Timberlake strapped on his dapper tour uniform, sans disguise, for round two of his 20/20 Experience tour at the Barclays Center (Dec. 14). It’s been 128 shows (he’s counted) since opening night in Brooklyn on Nov. 6, 2013 and the former boy band heartthrob isn’t the same man. For one, the 33-year-old Tennessee kid holds up extremely well for an artist who’s been on the road since last summer when he co-headlined a Legends of the Summer outing with rapper mestie (male bestie), Jay Z. Second, his wife of almost two years, Jessica Biel, is expecting the couple’s first child.

But assess JT’s growth from an arena seat and the changes are hard to pinpoint. Minus a couple more strands of facial scruff, he’s still as limber as new solo artist JT in 2002, who dancefloored everyone with the Pharrell-produced «Like I Love You». Despite his affinity for scribing songs about pills and potions (see «Pusher Love Girl» and «Drink You Away»), Mr. Timberlake’s influence is anything but under. The symphonic voyage that is his two-part namesake LP The 20/20 Experience serves as a point of entry for Justin into grown manhood. Where his 2002 debut Justified satisfied Top 40 heads and his 2006 FutureSex/LoveSounds oozed sex and experimentation, 20/20 offers a clear vision of his maturity into a nicely groomed conductor of his own orchestra.

The show itself is clearly Timberlake-manufactured. Live band affectionately known as the Tennessee Kids, fluid backup dancers, groovy BG singers, laser lights and a super-sleek pull-out stage that brings the man of the night front and center to everyone in the venue. Even the Hov cameo for «Holy Grail» or the random shout out to Mrs. Carter when he sings Beyonce’s «Tom Ford» ad libs is all his own. (Queen Bey and Taylor Swift were also in attendance). It’s easy to YouTube most of the «surprise» moments from Justin’s set including the Elvis Presley cover for «Heartbreak Hotel» and the Michael Jackson tribute with «Human Nature». Still, the more eye, or better yet, ear-opening experiences come from live renditions of his early catalog hits like «My Love» or «Until The End of Time». For the latter, JT dims the lights and hits the keys of a white grand piano, adding extra romance and intimacy from a fellow who gets tweens and ladies screaming «You sexy beast, you». (This writer heard it.)

Sexy doesn’t make a comeback but rather, is a staple the entire concert. His Tom Ford ensemble doesn’t restrict his many hip swivels while sensual notes remain stuck to Justin’s repertoire. But like fine wine, Justin ages nicely. Even in humility. Just ask 10-year-old Sal, one of the front-row occupants who caught JT’s attention with his young man suit. After telling his idol that he’s been watching Justin since he was two, he broke down and even gifted the headliner with a bow tie. «Greatest gift ever ‘cause a gentleman can never have too many bow ties», JT said. «I may have to wear this on Christmas Day. I love u kiddo». The soon-to-be cool dad paused. «Shit, that got me». With the tour wrapping this month and his baby on the way, it may be another seven-plus years before we get another Justin Timberlake masterpiece. But there’s zero doubt that what we get will still be him.