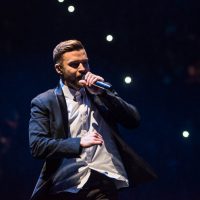 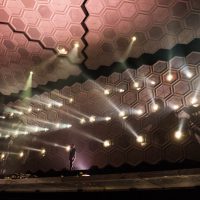 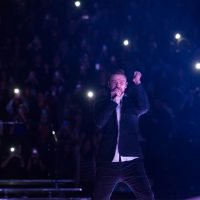 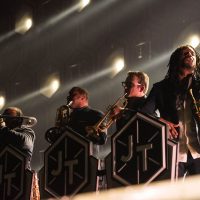 That’s the prospect he seemed to be envisioning, anyway, at the Forum in Inglewood, where Timberlake brought his world tour Monday night, almost a year to the date after it first stopped at Staples Center in 2013.

«Back again for more?» he asked, pointing to a fan near the stage, not long into Monday’s show.

The length of this tour — which has also played Anaheim’s Honda Center, as it will again Wednesday night — mirrors the protracted rollout of «The 20/20 Experience», the two-part album that marked the singer’s much-publicized return to music following a period spent focusing on his acting career.

By the time he hit Staples last year, Timberlake had already racked up a pair of No. 1 records, received a lifetime achievement award from MTV, played a series of stadium concerts with his pal Jay Z and performed on seemingly every late-night television show in existence.

No surprise, then, that that initial local appearance felt something like a royal visitation, with endless swagger, an adoring crowd — and no dramatic tension whatsoever.

Yet 2014 has been different — less kingly — for Timberlake, who after being left out of the major categories at January’s Grammy Awards has been largely overshadowed this year by the likes of One Direction and Taylor Swift.

Accompanied as always by an expansive live band complete with horn players and backing vocalists, the singer was downright ferocious in «TKO» and «SexyBack», the latter of which he paused at one point to proclaim, «I’m still running this!» It’s a line he’s used before, but here it sounded newly aggressive, as though Timberlake knew there were those in the house who needed convincing.

He mustered a similar intensity for covers of «Heartbreak Hotel» and Bell Biv DeVoe’s «Poison», far-flung indicators of a big stylistic appetite.

But Timberlake wasn’t just showing that even a superstar can stay hungry. For much of Monday’s concert he was coasting — not with the smug self-satisfaction he flashed last year but with the honest confidence of someone who’s been on the road for more than a year.

«Not a Bad Thing» was appealingly breezy; «What Goes Around… Comes Around», with Timberlake strumming an acoustic guitar, had a rootsy arrangement that made the song feel spontaneous. Even the disco trifle «Take Back the Night», the laziest cut on both «20/20 Experience» discs, oozed a winning, slightly oily exuberance — like a Lionel Richie residency in Las Vegas, a booking whose time has clearly come.

Occasionally that assurance wasn’t enough to conceal Timberlake’s boredom with some of his material, as in the relatively ancient «Cry Me a River», which had no more tears in it, and «That Girl», an homage to Memphis soul that here was more sleepy than sensual.

True lifers, of course, figure out how to get the job done no matter what. (I repeat: Lionel Richie.)

But perhaps Timberlake knows he’s not quite ready for that gig. With his marathon tour finally set to wrap in January — and his wife, Jessica Biel, reportedly pregnant with the couple’s first child — the singer’s slight fatigue may be a sign that he’s preparing to step away from music again.

Don’t worry, though: When he comes back, it’ll seem like he’ll never leave.

JUSTIN TIMBERLAKE SEDUCED EVERYONE AT THE FORUM LAST NIGHT
LA Weekly — In the well-oiled machine that is an arena pop show, it’s rare that a performer really drops his facade and lets the audience get a sense of his actual personality. Last night at the Forum however, amidst the choreography, the lasers, the band, the detachable stage that glided over the audience, and the rollout of more than a decade’s worth of mega-hits, Justin Timberlake also gave us some moments that felt spontaneous and real.

«It’s your birthday? Today?» JT at one point asked a woman in the audience. «What’s your name? Cassidy? Are you driving? Did you Uber? No? You’re not driving? Imma get you a shot then».

The crowd went wild, although probably not as wild as Cassidy.

It was an unrehearsed moment that JT delivered with the characteristic style, swagger and sense of humor that we’ve swooned over since ‘N Sync blew up MTV in 2000. The fact that he sort of let us see who he is, and that he was so off-the-cuff charming amidst the massive production of his 20/20 Experience, is why this guy is an entertainer of the highest rank.

The fact that JT also performed the shit out of some of the biggest pop songs in recent history also made for a hell of a party last night in Inglewood.

See also: More photos of Justin Timberlake at The Forum

The 20/20 Experience began at 9 p.m. with «Pusher Love Girl». JT arrived onstage wearing black pants, a white button down, a black jacket and some fresh to death white sneakers. It was pure seduction from the start, as JT showed off his fancy footwork and at one point just stood there and let the audience scream in his general direction. He probably could have stood there blowing his nose and we would have cheered just the same.

He proceeded to tear through early hits including «Rock Your Body» and «FutureSex/LoveSounds», joined by half a dozen dancers. The choreography was absurdly on point.

The audience was hella diverse, composed of both young and old, many of whom sang along with equal enthusiasm. Unlike so many pop stars, JT has only expanded his audience as he’s gotten older, and those of us that have been there since the beginning have grown older with him. He wasn’t thrusting quite as hard as he did when we saw him on the FutureSex/LoveSounds tour in 2007, but the man still proved that he’s as much of a pro dancer as he is a singer and ridiculously good-looking person.

The energy did lull a few times, particularly when the band on occasion drowned out JT’s singing. At one point, a white grand piano appeared onstage and he sat down to play a lounged-out version of «My Love» that switched gears when the beat dropped and the song got as raunchy as we wanted it to be.

JT swung between various genres throughout the show. He intermittently worked the Sinatra angle cultivated on The 20/20 Experience, dipped into a vaguely country/western thing with an acoustic guitar for «Drink You Away», indulged us in much hardcore R&B, and even threw in some Latin flavor on «Take Back the Night».

It was during the latter song that the nosebleeds became the expensive seats, as part of the stage detached from the front and created a rolling dance platform on which JT cruised the length of the Forum, running back and forth to work both sides of audience as the band incorporated the chant part from Gloria Estefan’s «Rhythm Is Gonna Get You». Genius.
Such venue-spanning maneuvers are also used by pop stars like Beyonce and Drake, but it’s always a thrilling touch when they connect with different sections of the audience, especially with the people in the seemingly shitty seats. When JT got near us last night, we were 18 years old again, and couldn’t help but literally squeal from being in such close proximity to the man. Even the woman watching via Facetime was losing her shit.

By the time JT got to the other side of The Forum, the energy was massive and the audience was his. «I love you to death», he announced. «Here’s to you, California!» He took a shot of something before performing Elvis’ «Heartbreak Hotel» and an acoustic guitar mashup of Michael Jackson’s «Human Nature» and his own Britney revenge anthem «What Goes Around… Comes Around».

When he returned to the main stage, the party was in full effect. JT and crew got down on a medley that included «Jungle Boogie» and Bell Biv Davoe’s «Poison», then segued into recent jam «Suit & Tie». As the show closed, he asked the audience to applaud for his band, The Tennessee Kids. Really, he could’ve asked us to cheer for cholera at this point and we would have done whatever he said.

«I ain’t fucking done», he then announced, before closing the show with «Sexyback» and «Mirrors». He then stood onstage for a few minutes while we stood and cheered for him. As the lights came up, Frank Sinatra’s «My Way» came through the speakers. That song choice was surely no accident.

Random Notebook Dump: «HE’S SO CLOSE I CAN SEE HIM LICK HIS LIPS».

Overheard in the Audience: «The Super Bowl halftime show with Aerosmith, Britney and ‘N Sync is still my all time favorite».

Personal Bias: I left that 2007 show with a better understanding of my womanhood than I had when I walked in.