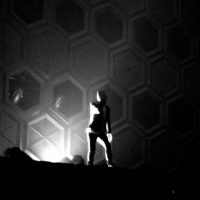 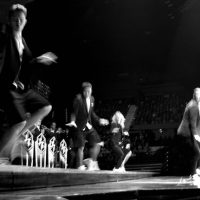 Justin Timberlake rediscovers his love of the stage

Brisbane Times — A white piece of paper lands on the stage.
Justin Timberlake, having finished his syrupy opening number Pusher Love Girl, unfolds the delivery and quietly reads the message scrawled inside.

«For those who threw that up here, I have no more backstage passes», he says.

Timberlake performed the first of his two shows at the Boondall Entertainment Centre on Friday to a city that has been starved of his presence for nearly a decade.

His time away from the stage was spent conquering Hollywood, but his enthusiastic return was telling of a man who had rediscovered his first love.

Timberlake moonwalks, slides, twirls and shuffles his way across the stage surrounded by the 15-piece brass fanfare that is the Tennessee Kids.

The tug of his jacket and the adjustment of his collar elicit shrieks from the younger, female members of the audience.

It all makes for a soul revue accented with top-calibre pop and R&B, gloriously bound to the era of big bands.

«We are JT and the Tennessee Kids», Timberlake tells the crowd.

«Or as my friends like to call me here, Juzza.

«Yeah, Juzza. I like it.
»
That’s not the last of the somewhat over-laboured attempts at connecting with the Australian audience.

Yet, Timberlake manages to remain debonair, proving his high calibre while channeling Michael Jackson, as well as Earth, Wind and Fire and Sinatra for good measure.

He performs favourites including Rock Your Body, Future Sex/Love Sound and Like I Love You, before turning his attention to a familiar member of the audience.

Speaking to wife and fellow Hollywood actor Jessica Biel, who is seated in the upper wings, he launches into My Love.

Timberlake’s voice is superb, veering from falsetto to toned tenor to rapping, and the choreography exacting.

Nothing less can be expected from the former ginger-permed member of *N Sync who has impressively managed to emerge from Disney’s shadow as a pop culture sophisticate.

If there is a negative it is the sound that often drowns out Timberlake’s vocals and turns to mud whenever the volume rises.

And there comes a clichéd moment when a white grand piano rises from the bowels of the stage for Timberlake’s romantic ballad Until the End of Time.

But that doesn’t detract from the climax that comes during the Sambra-inspired Let the Groove Get In when an extending platform carries Timberlake over the crowd and has every audience member on their feet.

Mirrors ends the 20/20 Experience with the crowd on their feet again, clapping in unison.

And there’s a final kiss and a wave for Biel as Timberlake disappears beneath the stage.

Justin Timberlake returned to Brisbane at the top of his game

Tom Magazine — Justin Timberlake returned to Brisbane at the top of his game. Playing two nights at the Entertainment Centre: this was a gig that had ‘event’ stamped all over it. Night one was absolutely packed to the rafters. The stage set was sheer art deco and had a genuine 1930’s feel to it … with a twist. JT appeared on stage in silhouette and then the band rose through the floor to a thunderous reception. This was no lightweight band: Timberlake’s posse included backing singers, three keyboards, a phalanx of backing singers and a horn section.

Kicking off with Pusher Love Girl, before a quick segue into Gimme What I Don’t Know (I Want), Timberlake had the venue on its feet by the time Rock Your Body rolled around. Visually, it looked stunning. Timberlake was in fine voice throughout, but, at time, the mix was muddy… and super bass heavy.

The hits kept coming as JT took the opportunity to bust those trademark dance moves. My Love, an elongated reworking of TKO and Summer Love kept the mood distinctly ‘up’. After a cover of Jay Z’s Holy Grail, Timberlake closed the first half with his signature hit, Cry Me A River.

Post interval saw a more stripped back sound take over. Only When I Walk Away was followed by Drink You Away. The secret star of the show was the stage itself. As the front of the stage (yes, the full length of the stage) broke away … it rose above the audience and moved across the entirety of the floor space. Quite a spectacle, for a few songs, the back of the room was now the best seat in the house. Timberlake was adept at mixing things up. Alongside his own material, he dropped in some terrific covers. After his own Senorita and Let The Groove In, he grabbed an acoustic guitar for a take on Elvis’ Heartbreak Hotel. The back of the floor was converted to the coolest bar in Brisbane and Timberlake was holding court.

Still at the back and then making his way back towards the original centre stage, Timberlake dipped into Not A Bad Thing and What Goes Around… Comes Around: he split the pair up with a cover of Michael Jackson’s Human Nature and Kool & The Gang’s Jungle Boogie.

A stunning gig, Timberlake had the audience in the palm of his hand. Relatively light on small talk, he let the music do the talking. It’s hard to pick favourites, though Suit & Tie was an absolute knock out. SexyBack was next and finally the closer, Mirrors. Justin: you came, you rocked and don’t leave it so long next time. Wow.

Thomas Bleach — Justin Timberlake has been on my bucket list to see for a long time and with » The 20/20 Experience World Tour» he doesn’t disappoint, not even slightly. Dramatically opening with «Pusher Lover Girl» JT arrives on stage to overwhelming screams and for the next 2 and a half hours he has the crowd eating out of his palm. Not messing around he goes straight into the hits «Rock your Body», «Future Sex Love Sounds», «Like I Love You» and «My Love». Followed by one of my favourites ‘Summer Love» which I’m not going to lie, had me out of my seat very quickly. His audience interaction is slick and well perfected; he knows exactly what to say and do to make the crowd go into hysterics. His band «The Tennessee Kids» take everything to a whole new level, their sound is so synched and brings all these songs to life. He wraps up the first half of the show with «TKO«, «Until The End Of Time«, «Holy Grail» and «Cry Me A River». The first part of the show leaves you with your mind blown, there’s just no other way to explain it. However he does perform a LOT of his hits and doesn’t leave much for the second half which makes the last hour a bit underwhelming.

After a brief 10 minute intermission JT was back on stage beginning with «Only When I Walk Away», «Drink Away» and «Tunnell Vision» from his «20/20 Experience» albums. «Senorita» gets the majority of the crowd out of their seat and keeps them standing when his stage starts moving and has him residing at the back arena for the next couple of songs. This allowed him to get up close and personal with fans who didn’t have the best seats in the house to start with. Acoustically performing a cover of Elvis Presley’s «Heartbreak Hotel» he went into «Not a Bad Thing» and a cover of Michael Jackson’s «Human Nature». «What Goes Around» had the arena singing in unison before he took the show back to the main stage with the infectious «Take Back The Night». Perfectly closing the show off with his mega hits «Suit & Tie», «SexyBack» and «Mirrors» he gave the crowd everything had and nothing less.

The production value on this tour is incredible and allows him to interact with the whole arena in different aspects. However the dancers were a bit underwhelming and didn’t have any show stopping moments like they did on the «FutureSex Love Show Tour». The best dance breakdowns actually came from JT himself who still has the moves to make anyone swoon. Vocally I can’t fault him at all, he gave every song justice and put a lot of pop stars we’ve seen recently to shame. Justin Timberlake doesn’t just put a show on; he gives you an unforgettable experience. If you get the chance to witness this show live make sure you go because you will not be disappointed, that’s a fact not a statement.