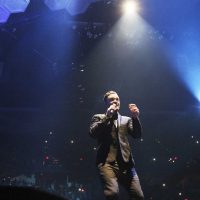 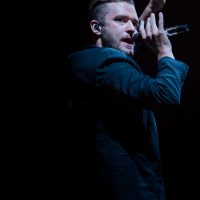 San Antonio Express-News — Justin Timberlake has ascended to the title of the biggest male pop star in the world, so he didn’t need to pander to the sold-out crowd at the AT&T Center on Tuesday night.

But when he did anyway, the veteran «Saturday Night Live» host hit the perfect notes.

«We’re excited to be in Texas», he said, adding «World Championship Texas!» as he indulged the crowd in a «Go Spurs Go» chant.

Even in the packed arena, Timberlake found ways to connect with the crowd in a dynamic show.

Performing on a stage that included a moving runway that glided about 20 feet above the floor as he sang, Timberlake and backing band The Tennessee Kids launched into an impressive 28-song set.

Tuesday’s show was the 95th date of his «20/20 Experience Tour» traveling through North America, Europe and Asia in support of his two-disc, 20-song release that was the biggest album of 2013. And the tour already has dates booked to Dec. 20, with a return to Texas for a Houston show Dec. 1. Timberlake showed no sign of wear or tear, switching between dance solos, piano songs and playing an acoustic guitar.

He launched into the opening line of «Deep in the Heart of Texas» before one song and took a break at another point to get the entire crowd to sing «Happy Birthday» to a 12-year-old girl, imparting the wisdom to her of «You don’t know (expletive). Listen to your mother».

The backing band of about 20 musicians and dancers added some nice layers to Timberlake’s set, including a soul infusion to his early pop hit «Like I Love You».

Timberlake, 33, was playing his first show in San Antonio since 2003, when he broke off with the band NSYNC for his first solo tour, the «Stripped/Justified» tour with Christina Aguilera. The former Mouseketeer ditched his mouse ears and frosted tips long ago in favor of a movie career and actress wife Jessica Biel.

His set included four covers, including two with personal significance: Elvis Presley’s «Heartbreak Hotel», for the Tennessee native, and Michael Jackson’s «Human Nature», for a pop icon that Timberlake patterned his on-stage career after. There also were covers of Kool & the Gang’s «Jungle Boogie» and Bell Biv Devoe’s «Poison», which also were highlights for the crowd of mostly women and a high percentage of men unashamed to admit they dig Timberlake after his SNL «… in a Box» sketch.

Timberlake played for more than two hours, closing with his biggest hit, 2006’s «SexyBack» and «Mirrors», the biggest song thus far off «20/20» which ended the night with a full crowd sing-along.

It was first AT&T Center sellout for a nonrodeo concert since Taylor Swift in May 2013. Tickets sold on the resale site StubHub for as much as $900 each.

The Thorn — «There’s not a place in the world like Texas!» This was the decree from Justin Timberlake Tuesday night as he brought the house down at the AT&T Center in San Antonio. The pop idol knew how to work his crowd, too — he made sure to play up his Texas love, diving into an acoustic rendition of «Deep in the Heart of Texas». Even more stirring was his cry of «GO SPURS GO!» which made the entire arena erupt with vibrant cheers, up until Timberlake said, «…OK, shut up».

Outside of these coy nods to the Lone Star State, Timberlake’s performance was packed to the brim with impressive theatrical touches. The stage itself was worthy of a role in a Michael Bay film — it transformed constantly, lifting Timberlake and his band up to eye-level and then sinking them into the floor as they disappeared under the stage. After the show’s intermission, the walkway that ran at the front of the stage actually lifted up and out, floating Timberlake and some of his band members over the heads of fans and out into the center of the arena, making this stadium show feel shockingly intimate.

Stripping away the Texas ego-stroking, smoke and «Mirrors», the audience was left with a truly excellent performance by one of the biggest musical stars in the world. Timberlake was constantly in motion; either dancing, playing guitar, or reaching out to fans in the crowd. His list of hits is long, so picking highlights is difficult — you might choose the up-tempo jam «TKO», the totally danceable «Take Back the Night», or the heart-wrenching ex anthem «Cry Me a River». Even with all of his hits, the ultimate highlight may have been a cover: near the end of his performance, Timberlake broke out with Bell Biv DeVoe’s «Poison», and there was not a still body in the stadium.

Timberlake proclaimed a few times that «San Antonio came to party», but he embodied this literally when he called out a handmade sign he saw that indicated it was someone’s birthday. He asked the girl holding the sign if it was really her birthday, and she said it was, and she was turning 12. Timberlake responded, «I mean this in the best possible way — you don’t know shit!» He then led the entire stadium in a rousing rendition of «Happy Birthday», and at its close he said to the birthday girl, «Don’t you cry! Don’t! Cry when you’re 21 and it’s 3 a.m. You’ll know what I mean when you get there».

Though his fans could have partied all night, Timberlake left them with the perfect parting gifts: three back-to-back mega-hits that saw everyone dancing, singing, and swaying along. The dapper «Suit & Tie» melted into one of his biggest hits, «SexyBack», taking a detour into «The Roof Is on Fire» along the way. When everyone had danced and sweated until they couldn’t bear anymore, Timberlake broke out into the anthem «Mirrors», and cell phones lit up the stadium like twinkling stars.

Between Mariah Carey-worthy notes, Michael Jackson-worthy dance moves (and a «Human Nature» cover to top it all off), and infectious hits that beg listeners to join the fun, Justin Timberlake proved himself to be more than your everyday showman in San Antonio — he’s a man of the people, and he’ll get the party started every time.

Peter Posts — If you are ever looking for a show that stars someone you would consider the ultimate showman, then look no further than the concert we just went to. Justin Timberlake is, without doubt, the greatest male artist since Michael Jackson. No questions asked. His ongoing tour captures every single reason why he is an extremely successful global superstar.

Timberlake brought The 20/20 Experience World Tour to a completely sold-out AT&T Center in San Antonio, TX, on Aug. 5. Approximately, 15,000 people filled up the venue for a concert that would incorporate great music, dazzling dance routines, a stunning set, and an unreal light and audio spectacle.

Justin and his band, the Tennessee Kids, hit the stage right around 8:30 opening the show with «Pusher Love Girl». Timberlake emerged from under the stage, so did the band, and he used the backdrops as scenery throughout the show.

The stage was set up in an interesting way. The main stage is a rather small, end-stage with a huge back wall which serves as a projector that lights up and shows different imagery and video. The back bends up, allowing even more space to be used as a video screen. It also had various openings where LED lights would light up the venue. Throughout the show, the light and sound was on point.

Timberlake was backed with 6 dancers, a 12-piece band, and 4 vocalists. The flexibility of the stage allowed for the band to be lowered down underneath the stage — which was used a few times where the singer would be performing alone on stage, while the band played from under, kind of like an orchestra pit. At some point during the show, part of the main stage rises, and literally moves across the arena to the other side where the side-stage is. This allowed for all the fans, in every section, to get a better look at Justin.

But coming back to the music, the hits were very well spread out — and with the popularity that he currently carries, it was not surprising to see the whole crowd singing along to pretty much every single song.

The show is split into two segments, divided by a 10-min intermission. There was never a dull moment. The first half of the show was hit-heavy with songs such as «Rock Your Body», «My Love», «TKO», and «Cry Me A River».

Timberlake and his band made some pretty impressive arrangements during songs to make the show even more energetic. Almost every song was altered with on-the-spot dance breaks, lyric-changes, addition of other songs, and beat-drops. The dance routines show how impressive of a dancer he is. He knows his music very well, and you can see that during some of his spontaneous dancing.

One thing that he does very well is playing well with the audience. He constantly interacted with the crowd. With smart and witty remarks, he kept the audience engaged in-between songs.

During one of his constant greetings to the crowd, he spotted a fan near the stage that was celebrating her birthday. When he asked how old she was turning, she said «12». Making the entire AT&T Center laughed, he told the girl after singing happy birthday, «Where are your parents? I’m saying this in the most sincere way I can, you don’t know shit. Don’t you cry … cry when you are 21, and it’s three in the morning».

When greeting the crowd at another time, he made the crowd roar by saying, «What’s up San Antonio. I’m excited to be in Texas … in world championship Texas — swag». This lead to an incredible «Go Spurs Go» chant since the AT&T Center is the home of the San Antonio Spurs.

His interaction with the fans helps boost his personality, which has always been positively received. But outside that, the music is what makes him one of the greats. However, doing it right, he honored the kings; on the second part of the show during an acoustic segment, in-between current single «Not A Bad Thing» and 2006′s «What Goes Around, Comes Around», he paid tribute to Elvis Presley and Michael Jackson by performing «Heartbreak Hotel» and «Human Nature» respectively. It just gives the impression that he knows he is next in line, and he is making sure everyone knows that he admires the ones that came before him.

The shift from the main stage to the side stage was done via «Let the Groove Get In» and returned with «Take Back The Night». There was on fear of falling down, as he kept the dance routines with his dancers and back-up vocalists while the moving stage crossed the house floor high above the ground.

Making sure he also kept the show nostalgic, he performed some of the songs that made up the beginnings of his solo career such as «Senorita» and «Like I Love You». He also covered songs such as Kool & The Gang’s «Jungle Boogie» and Bell Biv DeVoe’s «Poison». Plus, he included his chorus-role in Jay-Z’s «Holy Grail» and «Tom Ford» by singing his verses.

He ended the show with a bang — still showing off his energy-driven showmanship while keeping it classy. «Suit & Tie» was used as the last song on the main set. The encore consisted of incredible performances of his biggest hits «SexyBack» and «Mirrors» — in which he created an unreal atmosphere and everyone was on their feet.

As stated earlier, Justin Timberlake is the best male artist since Michael Jackson. He is the current king of pop with such an extravagant way of performing, with funky vibes and a classy prime style.

He «still runs this bitch!».

Check out the set-list and a gallery of photos from the show below.