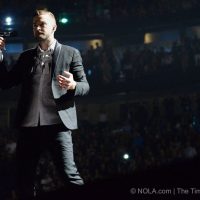 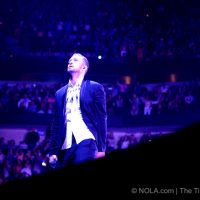 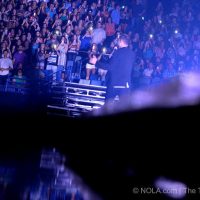 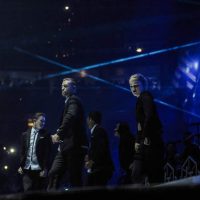 The Times-Picayune — The stage is Justin Timberlake’s natural habitat: the 33-year-old star has been on one, on and off, since his Mouseketeer days. Notably, in his current incarnation as a pop and R&B force, he’s managed to transition, decisively, from kiddie star to teen heartthrob to a formidable full-grown talent, with four chart-topping albums, a solid acting resume and an impressive list of producer credits, too. Entertaining is his business, and business is pretty good.

Timberlake’s concert Sunday night (Aug. 3) at the Smoothie King Center sold out well in advance; the capacity crowd was pumped, and a briskly paced, high-energy show kept them that way, even through the odd interruption of a 10-minute intermission and some audibly murky sound.

Pop concerts on the arena level are cool, tightly choreographed productions, and if sweat and spontaneity are your thing, they can fail to satisfy. Timberlake’s brand of entertainment, though, is all about polish and pizzazz; he’s a 21st century song-and-dance man, big on showmanship, slick moves and audience love.

Between his Tennessee Kids backing big band behind their black-and-white Deco music stands, clusters of quick-stepping dancers and projections of the action on the honeycombed back wall of the set, the stage was a hive of motion for two hours as he ran through a set of 30 songs plus, heavy on the hits — «Rock Your Body», «Summer Love», «Like I Love You», «Futuresex/Lovesound» – with a double encore of «SexyBack» and «Mirrors».

Risers at either side of the stage let the singer clamber up into the seats. Most dramatically, a walkway straddling the room slowly glided through the air over the crowd’s heads, at one point delivering Timberlake — via moving aerial disco party, as he sang «Take Back The Night» – to and from a platform in the center of the room, where he strapped on a guitar for a cover of fellow Memphian Elvis Presley’s «Heartbreak Hotel».

With several covers and lots of banter with the crowd (he also took on Michael Jackson’s «Human Nature», Kool & the Gang’s «Jungle Boogie», Bell Biv DeVoe’s «Poison» and a bit of, oddly, Nirvana’s «Smells Like Teen Spirit») the Sunday concert was overall more playful and exuberant than his crisp, cool and collected set in New Orleans during the 2013 Super Bowl weekend, which came right on the heels of the release of the cool, collected single «Suit and Tie».

He wished a fan down front a happy birthday several times, and demonstrated his fluency for local lingo (he said «Ya heard me?» and pronounced the word «baby» in the unique, drawn-out way that’s unmistakably New Orleans; if you blinked you would have missed it, but he also briefly quoted «Back That Ass Up».)

All things considered, it was a full-frontal offensive of charm, and he slayed ‘em.

Examiner — I’ll have two of whatever Justin Timberlake is having. (Which is, presumably, Timberlake’s newest venture into tequila, Sauze 901.)

For two-and-a-half hours, Timberlake and the Tennessee Kids brought a party unlike any other to the Smoothie King Center on Sunday night in New Orleans, Louisiana. In a summer of arena and stadium shows, Timberlake makes everyone else simply look like an opening act.

As he ran from one side of the arena-spanning stage to the other, he barely stopped for a moment. It was in those rare moments, though, that he did something so many artists forget to do: connect with the audience. Timberlake laughed telling the audience that if he was moving slowly (not for a second, by the way), it was because of the gumbo he had before the show. He even sang «Happy Birthday» to one lucky lady in the front row. He bowed repeatedly to the crowd that roared so loudly, sometimes it was difficult to hear the music.

For the visuals of the show, the video screen displayed artistic images and the light show turned the Smoothie King Center into a Vegas nightclub. The VIP section, located on an elevated platform in the back, was a classy bar set-up with tables and a Prohibition-era feel to it. Naturally, Timberlake’s tequila was the drink of choice in this section.

If you thought you might not have the best seat in the arena, that quickly changed halfway through the concert. Timberlake’s stage lifts up and rolls through the entire venue, and as it does, they continue on with the show. It was like Disneyworld for adults: everyone’s eyes widened and mouths dropped.

Displaying no fear of heights, Timberlake dances and runs across the moving stage with grace and poise, looking like he’s having the time of his life right along with the audience. Next, he utilizes the stage in the VIP section. Not a bad seat in the house for the man who’s thought of everything.

One of the most impressive things is the way Timberlake displays his backing band so prominently; he recognizes this isn’t a one-man show and sings alongside of them, proving his bubblegum pop days are over. This is the soulful music he should have been making his whole career, but it’s only now that it feels sincere. The Tennessee Kids play the part well and help form an atmosphere that’s unstoppable, much like Timberlake himself.

It’s clear that the «20/20 Experience» refers to the vision it takes to create such a masterpiece of a show.

Inquisitr — Justin Timberlake and his 20/20 Experience World Tour have done it again. This is possibly the second or third time that the great JT has made it into my article queue for not only selling out a show but also for delivering on his promise to give fans their money’s worth. And this is most certainly a feat, considering the cost to see the former ‘N Sync boy band member’s smooth and funky show is at a reported all-time high, according to Forbes.

Justin Timberlake performs during his live show
Yet the entertainer has had no problem selling tickets or selling out shows and New Orleans was no exception. Despite the fact that Justin Timberlake has been touring for nearly two full years now, he seems to be a natural on stage and is still fresh as a daisy. In the New Orleans Times-Picayne, Timberlake’s 20/20 Experience tour stop in New Orleans received this rave review:

«Timberlake’s brand of entertainment… is all about polish and pizzazz; he’s a 21st century song-and-dance man, big on showmanship, slick moves and audience love».

It’s true, Timberlake certainly seems at home on the stage, and he’s had plenty of experience on it. The former Mouseketeer-turned-teen boy band sensation has seemed to embrace the right kind of magic to solidify his place amongst the greatest of music greats. This accolade is further backed up by his long list of awards and nominations. To date the singer, producer, actor, businessman, and philanthropist has racked up a total of 60 award show wins, including nine Grammys, and over 177 nominations.

Perhaps this is the fuel that keeps Timberlake firing on all cylinders while he’s on tour. It appears that Justin had plenty of fun planned for the night as he seamlessly and invitingly glided through a bevy of his top hits, fan favorites, and even some covers. Fans who attended last night’s show in the Smoothie King arena in New Orleans got treated to «Rock Your Body», «Summer Love», «Like I Love You», «Futuresex/Lovesound» — with a double encore of «SexyBack», «Mirrors», and for covers, Timberlake delivered Elvis Presley’s «Heartbreak Hotel», Michael Jackson’s «Human Nature», Kool & the Gang’s «Jungle Boogie», and Bell Biv DeVoe’s «Poison».

Justin Timberlake in concert
In related news, Justin Timberlake has signed on to headline a live music show for a new program on Yahoo! Live. He will be one of several performers, which include Kiss and Dave Matthews Band, who will appear in a series that is sponsored by Live Nation and promises to stream one concert per day for 365 days straight