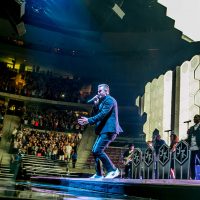 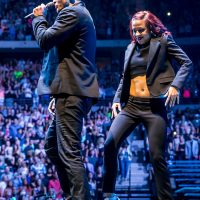 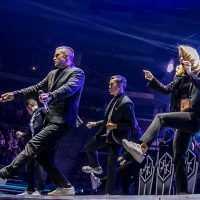 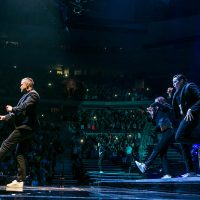 Justin Timberlake concert at the Palace is a crowd-pleaser

Detroit Free Press — Like the recurring bolt of lightning pattern on his clothing and props, Justin Timberlake lit up the Palace of Auburn Hills on Monday.

Returning to Michigan for the first time since last summer’s double-headlining bill with Jay Z at Ford Field, Timberlake packed the Palace for a stop on his «The 20/20 Experience World Tour». A full 2½ hours, the show was punctuated with elaborate, colorful light displays, a moving glass platform and Timberlake’s fancy footwork that nearly rivaled the skills of his backup dancers.

Although the Palace declined to provide exact attendance records, spare seats were few and far between.

«We’re excited to be back here with you — we couldn’t take it, I just had to come back», said Timberlake at the start of the show, after bowing repeatedly and mouthing the word «wow» as the audience cheered at his entrance.

The show started out with a bang as Timberlake launched into an impeccably choreographed «Pusher Love Girl», one of the 11 songs from the smash 2013 album «The 20/20 Experience» that he performed.

He also belted out many of his most popular songs from previous albums, including «Rock Your Body», «Cry Me A River» and «Senorita» (from 2002 album «Justified») and «Summer Love/Set the Mood (Prelude)», «Until the End of Time», and the iconic «SexyBack» (from 2006 album «FutureSex/LoveSounds»). Timberlake even broke out his guitar for the first half of an acoustic version of «What Goes Around …/… Comes Around».

His passion for playing the Motor City didn’t fizzle as the show progressed. In the second half, Timberlake grabbed a drink and made a toast to Detroit.

«We’re about to toast to some of the realest people in the world: to family, to Motown, to Rock City and Motor City», he said. «Detroit, we love you».

And his audience reciprocated.

«He’s a great example of a successful artist — he isn’t into drugs, he doesn’t have bad press and he’s down to earth», said Daniella Torres, a 19-year-old from Detroit who says she has listened to Timberlake since she was 5 years old.

Calling the show «jaw-dropping», Torres said her favorite part of watching Timberlake is his display of energy.

«I love his clean-cut style, both in music and looks», said Canales. «I think he’s being himself—he doesn’t go over the top».

Oakland Press — Justin Timberlake gave his fans the real «20/20 Experience» on Monday night, July 29, at The Palace. With his smooth choreography, incredible stage set-up and thrilling band behind him, the multifaceted entertainer let fans know they didn’t just come to a show — they came to a party.

This seemed to be just what Timberlake wanted as he urged the audience to «turn up» even more throughout the night. «We are at a 9.7 right now», Timberlake said while performing «Like I Love You». «We are going to turn it on up to 10».

He clearly didn’t expect his fans to get that extra 0.3 without his help. He eased into the song «My Love» with a slow tempo and seductive tone, then flipped it around and performed a solo dance routine. All the while his lively Tennessee Kids band jammed on electric guitars and trumpets as if they were performing in the last big-band show that would ever exist and created a sound so full and fantastic that you could forget you were at a pop concert.

Timberlake has always mixed genres to make his music, especially on his recent pair of «The 20/20 Experience» albums. On Monday he managed to include a style of American music from every era of the 20th century via a tour through his greatest hits, reminding the sold-out Palace crowd of his talent, versatility, musical ability and swagger throughout the 28-song concert

Timberlake also managed to get up close and personal with his fans despite the scale of the show; during the second half, he and some of the Tennessee Kids glided over the waves of screaming fans on a floating auxiliary stage. Timberlake ran from side to side, attempting to give each part of the arena its proper attention before eventually landing in the middle of the venue, granting Timberlake closer proximity for those sitting toward the rear of the venue.

Timberlake performed a good mix of his old hits and new ones that define the artist he is today. He also performed multiple covers, which received as much reaction from fans as his originals, including Michael Jackson’s «Human Nature», Elvis Presley’s «Heartbreak Hotel», Kool & The Gang’s «Jungle Boogie» and Bell Biv DeVoe’s «Poison».

For such a demanding performance, Timberlake did not skimp on the butter. He ended his show with an encore of «Sexy Back» and «Mirrors», and in his last moments on stage, he got down on his knees, bowed and blew kisses, returning just as much love as he was receiving.