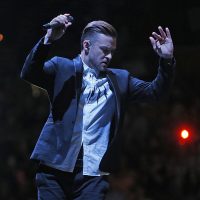 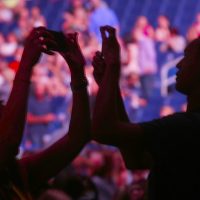 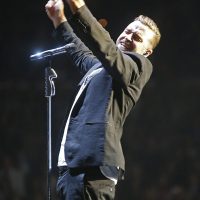 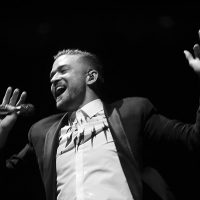 Justin Timberlake gives fans a show worth waiting for

The Buffalo News — «OK, let’s get one thing straight. We owe the City of Buffalo. So tonight we gonna give it to ya».

One song into his twin-set performance at First Niagara Center on Wednesday, Justin Timberlake addressed the situation surrounding his cancellation of an original date slated for last February.

Yeah. Like anyone in the building on Wednesday was planning on holding a grudge against Timberlake. The 33 year old owned the crowd, from the moment he rose up from beneath the stage on a platform, some 45 minutes later than the slated 8 p.m. start time.

Thing is, Timberlake was not engaging in empty boasting. He spent a few hours giving Buffalo a pop show on a higher level than any other mainstream act currently touring.

Forget Bruno Mars, at least for a few years yet.

Forget Lady Gaga, whose time may have come and gone.

Forget — gasp! — Jay Z and Beyonce, whose influence on Timberlake is clear, but whose efforts were eclipsed by the former NSYNC-er some four or five tunes into Wednesday’s gig.

This is how you do modern dance-pop. Big, bold, and visually spectacular, yes. But substantive on the musical end, too. And you’ve gotta be able to sing as well as you dance. Better, preferably. It doesn’t hurt if you happen to be the world’s most charming man, either.

Timberlake is the greatest pop culture talent of his generation. He’s funny, he can sing, he can play a few instruments reasonably well, he can write, he can dance, and he can command a stage. He’s also quite clearly obsessed with both Michael Jackson and Prince. But if you’re a guy weaned on R&B and pop and ’70s soul, well, you’d better be obsessed with both of those icons, and several others, too.

Wednesday’s show was divided into two sets. Deadline considerations prevented me from seeing all of set two, but by the time Timberlake returned from a short break to kick the audience in the face with the opening salvos of «Only When I Walk Away», it was all over but the shouting. The entire sold-out FNC had been on its feet from the downbeat of set one. And set two, if the opening three songs were any indication, appeared poised to dig deeper, and to capitalize on the good will engendered by the stellar first set of mostly dance-friendly gems.

One might criticize the similarity of tempo, tone, tenor and key for the majority of set one, but really, that would be quibbling. Timberlake and his uber-talented band — two keyboardists, a drummer, a percussionist, a bassist, four horns, four backing vocalists, two guitarists and, by my count, somewhere in the area of 10 dancers — kept the action going, from the hand-clap-heavy, pseudo-gospel overtones of opener «Pusher Love Girl», with its delicious Philly-soul vibe, through the more dreamy atmospherics of the alluringly strange «Futuresex/Lovesound», and the straight-up «Off the Wall» era Michael Jackson overtones of the impossible to resist «TKO».

Timberlake showed abundant growth with the release of last year’s «20/20 Experience», pulling far ahead of his peer pack to conjure an album that assertively commingled funk, soul, R&B, pop and alternative rock tropes, and it’s his ability to sell this rather daring material to a straight mainstream audience that is perhaps his greatest talent.

So «Lovestoned», with its elements of Coldplay and even Radiohead influence, went over as well as the more conventional modern R&B/pop ballad «Until the End of Time».

Inspired, engaging, fun, sometimes a little bit corny and other times deeply and genuinely moving, Timberlake’s «make-good» for Buffalo offered a blueprint for the successful modern pop show. There was no shortage of magic on this night, to be sure.

Justin Timberlake was Worth the Wait in Buffalo

Upstate LIVE — Justin Timberlake apologized from the start saying, «We owe the city of Buffalo, so tonight we’re gonna give it to ya». Fans had been eagerly anticipating his performance since the postponement of the original concert date five months ago in February 2014. With cool confidence and smooth moves Timberlake poured himself into a stellar three-hour performance at the sold out First Niagara Center.

The ambitious world tour dubbed, «The 20/20 Experience», boasted pure energy from start to finish. Along with his band, the Tennessee kids, JT dazzled the insatiable fans with nearly 30 songs including favorites, «My Love», «Cry Me A River» & «SexyBack».

Looking dashing as always, Timberlake owned the crowd with slide and swagger that only built as the night went on. During the second set, the crowd went wild when the front of the stage detached and transported JT, along with four back up singers, over the floor seats to the back of the arena.

Timberlake paid homage to influential legends when he covered Elvis Presley’s «Heart Break Hotel», Michael Jackson’s «Human Nature» — and took a moment to toast deceased Buffalo Bills founder Ralph Wilson saying, «Here’s to better late than never. Y’all know I’m a big sports fan. So, we’re going to do this one for Ralph Wilson». If there was anyone left in Buffalo that didn’t love JT already, his toast to Wilson surely won them over.

Clearly a born entertainer, Timberlake seduced the crowd with ease. With boyish charm and undeniable talent, he proved to Buffalo that he was well worth the wait.

Set 1: Pusher Love Girl, Gimme What I don’t Know (I Want), Rock Your Body, Future Sex/Love Sound, Like I Love You, My Love, TKO, Summer Love, LoveStoned, Until the End of Time, Holy Grail (Jay Z cover), Cry Me a River

Democrat & Chronicle — As I exited the First Niagara Center into a calm Buffalo, my ears were predictably foggy. Three hours exposed to gut-shaking bass, wailing instruments and a boisterous crowd will have that effect every time.

Noticing my left ear drum felt more beaten than the other, I pictured the young lady in the pink mini-dress who sat to my left during last night’s Justin Timberlake concert. Judging by the long, high-pitched howls that she and her friend sent Justin’s way throughout the night, she is surely without voice today.

As you can tell from my photo, our vantage point for the show was pitiful. Though I won’t disclose what row we were in, I will tell you that there was no one sitting behind us. No one. However, this didn’t dampen the spirit of JT’s rabid audience — like the girl to my left, and my wife, slightly less frenzied, to my right. In every corner of the jammed arena, super-fans were singing, screaming or scream-singing along, word for word, as he worked his way through his early «poppy» tunes and his more mature band-backed music of today.

Being at JT’s «20/20 Experience» tour stop was my «Beatles» experience. I’ve always seen video of the effect that band had on adolescent girls (and former adolescents); now I’ve witnessed today’s equivalent. People of all ages were losing themselves in his aura. Thousands became his backup backup singers. It would be hard for any modern musician to match this man’s command of a crowd. (Two people whom he saluted during the show — Michael Jackson and Elivs — could.)

I must admit, I wasn’t totally immune to this fascinating hysteria. When Timberlake, who is the same age as me, broke into a rendition of Bel Biv Devoe’s infectious «Poison» with his band, my inner 10-year-old emerged, dancing and reciting every word in unison. Oddly, I felt old at the very same time, as the lady to my left (temporarily) piped down, unfamiliar with a song from 1990, a year she may have spent in Pampers.

Timberlake’s outsize talents and appeal were on full display. What an experience.