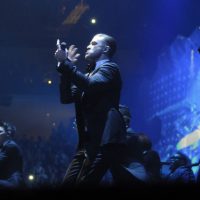 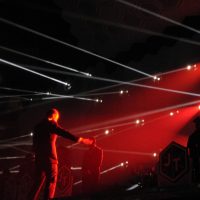 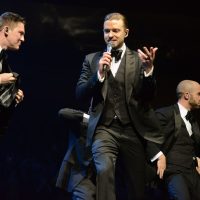 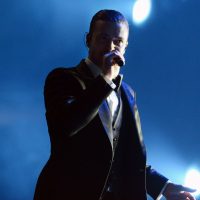 Times Online — Of course he wore his suit and tie Saturday, on a night when a burly sweater and scarf would have been more practical.

Justin Timberlake was styling all sorts of ways for a sold-out Consol Energy Center crowd that forgot all about its white-knuckle ride to get there once the singer took the stage.

Gliding gracefully and letting his falsetto fly, Timberlake showcased his supreme energy in an electrifying two-hour-40-minute performance book-ended by «Pusher Love Girl» and «Mirrors» from his 2013 release «The 20/20 Experience».

It was one of those rare times when an artist didn’t do an encore but should have to slow down the breathless pace, as a couple of his killer songs seemed a bit rushed at the end.

Backed by the Tennessee Kids, his tight band – or orchestra if you prefer — the 32-year-old Timberlake squeezed in all his solo hits, such as «Cry Me a River», «My Love», «Suit & Tie», and «SexyBack».

Both covers paled to the horn riffs of Kool & the Gang’s «Jungle Boogie» that the Tennessee Kids played as a segue into «Murder», and the rat-a-tat-tat beats of Bell Biv DeVoe’s «Poison» that had Timberlake and his six dancers – three male, three female — in full swing.

How does Timberlake do those dance moves, so graceful, sensual yet athletic? I’ll bet when he plays basketball in a gym his sneakers don’t even make that squeaking noise.

Though dance prowess alone won’t let you make the leap from boy band to critically hailed artist. Timberlake has turned into a consummate entertainer, who looks out into a crowd of 14,000 and seems to make specific eye contact with fans not on the floor.

He gave them all a good look, standing on a tall platform shaped like airplane wings wheeled to the very back of the arena where he sang seven songs including «Let the Groove In» and «Cabaret». As with other arena shows this year, including Drake and One Direction, the mobile stage provided ample Instagram ops for fans as Timbelake slowly rolled on by.

Befitting Timberlake’s visionary songwriting, the band struck a cohesive groove that blended soul, pop, hip-hop, rock and even jungle beats on the bass-driven «True Blood». Their musical apex might have been Act Two’s fierce opener, «Only When I Walk Away».

Timberlake’s voice held strong through the very end with «Suit & Tie», «SexyBack» and «Mirrors». His falsetto was excellent on an acoustic treatment of «What Goes Around… Comes Around».

Though I’d like to hear him test the lower end of his voice, too.

Perpetual motion in his black bowtie, crisp white shirt and black suit jacket, which he removed several times, Timberlake paused long enough to praise Pittsburgh as «one of the hardest working, hardest loving cities in all America».

As Winter Storm Electra piped down outside, Timberlake noted he hadn’t been to Pittsburgh in a long time.

«And you know what I forgot? It’s cold».

Well, he used an F-word modifier before the word «cold».

And though one of the loudest local concert crowds of the year didn’t need convincing, the important thing, Timberlake said, was that it was plenty warm inside.