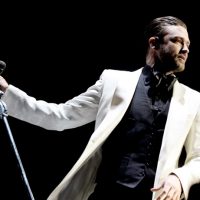 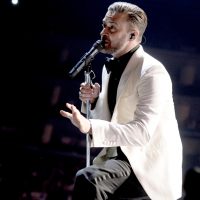 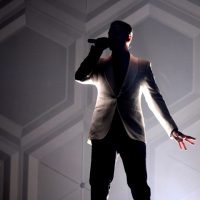 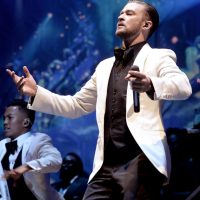 Neon Tommy — Justin Timberlake was unforgettable Tuesday night as he blew the roof off the Staples Center for his «The 20/20 Experience World Tour».

Although seemingly impossible, Timberlake exceeded already high expectations with a smooth performance that was full of his signature swagger and soul.

The energy in the venue was on overload, as he opened the show with his hit «Pusher Love Girl». Wearing a crisp, white tuxedo jacket, Timberlake ascended from the stage with his band, The Tennessee Kids, as he crooned to the audience. It was like a magical scene from the 1930s – suave and sexy – as he sensually worked the mike stand.

The staging was kept simple and clean, with no unnecessary bells and whistles. It was all about the amazing music of this phenomenal performer.

He did it all: he sang, danced, and played two instruments during the two and a half hour set, without missing a single beat. Timberlake solidified his spot as one of the best in the business.

He satisfied the audience’s desires and gave them their money’s worth. There was a little bit of everything. Naturally, he drove the show with recent smashes from his latest two-part album, «The 20/20 Experience». Songs like «TKO» and «Only When I Walk Away» sounded fresher and fuller with the live band backing him up. But, he didn’t forget old classics, like «Cry Me A River» from «Justified» (2002) and «My Love» from «FutureSex/Love Sounds» (2006).

He slowed it down and showcased his softer side when sat down at a beautiful white piano to serenade the audience with his ballad, «Until The End Of Time». Ironically, Timberlake easily made the sold-out show feel like an intimate, private concert. He even treated the crowd to another performance of his recent single «Drink You Away», which he sang at «The American Music Awards» on Sunday. It was even better live.

It wouldn’t be a Justin Timberlake concert if he didn’t infuse his lovable humor and personality into the show. During a break between songs, he asked the audience if this was the first time anyone had seen the show. Of course, lots of screams and cheers ensued, to which he replied, «Good. I like virgins…musically speaking».

Timberlake working the stage during «Pusher Love Girl» (Gabi Duncan/Neon Tommy).
There wasn’t a bad seat in the house, when Timberlake and his dancers glided over the crowd on a flying bridge to the opposite side of the arena, while performing «Let The Groove Get In». The audience went crazy in every corner of the venue, as they each got a glimpse of the sensational superstar. In addition to his own music, Timberlake took to his guitar to do a cover of Elvis Presley’s «Heartbreak Hotel». Then, everyone went wild when he sang a touching rendition of Michael Jackson’s «Human Nature».

The crowd was amped up from start to finish and Timberlake seemed to draw his power from them. He gave an unexpected acoustic performance of the first half of «What Goes Around…Come Around». But, before the audience could get too comfortable in the slower version, he yelled, «Everybody turn the f*ck up!» Just like that, the energetic Timberlake was back for the remainder of the song.

He kept that momentum going for the rest of the show, as the flying bridge carried him back to the main stage during «Take Back The Night». Timberlake ended the show the right way with arguably two of his biggest hits. He definitely brought the sex appeal on «SexyBack», as he swayed to the beat and engaged with the audience.

Fittingly, he closed the show with «Mirrors», and the entire Staples Center was completely glued in. Every hand was in the air and everyone sang along. You could feel the emotion in the room during that memorable moment as Timberlake belted out the moving love song.

Timberlake gave an exhilarating and electrifying performance that left audiences with an intensified love for his music and his exceptional talent. He proved undoubtedly that no one else can do it quite like him.