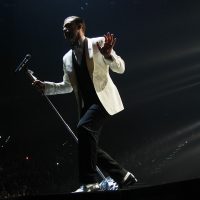 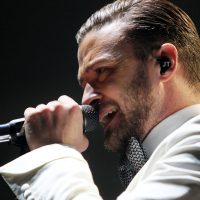 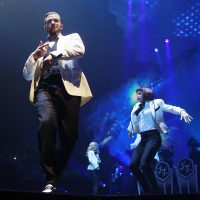 Las Vegas Sun — Superstar singer Justin Timberlake is a singing, dancing and sex machine, and he is hands down one of the best live entertainers in music today.

Timberlake brought his «The 20/20 Experience» world tour to MGM Grand Garden Arena on Friday night (he’s back tonight, as well), and it was nearly three hours of nonstop singing (his falsetto and overall range are fantastic) and dancing (Timberlake is still a fantastic dancer after all these years post-‘N Sync).

And fawning, too. Timberlake is the picture of 007 charisma in a white tuxedo jacket with a silver-and-gray checkered bowtie and black pants, then, after a 10-minute intermission(!), all-black attire, including a black jacket. His very presence onstage is captivating, and his crotch grabs made fans scream. Men want to be him; women and gay men want to be with him.

A few surprises and standouts from Friday night (the concert started on time at 9 p.m., and the applause for him throughout the evening was thunderous):

One of Timberlake’s great attributes is his willingness to dip into various musical genres — pop, soul and R&B, hip hop, EDM and country — and he soars in all of them.

The accompanying video for «Tunnel Vision» was especially racy, as it included numerous images of topless women. Topless!

Timberlake’s tributes — to Michael Jackson with «Human Nature», Elvis Presley with «Heartbreak Hotel» and Bel Biv DeVoe (now you know) with «Poison» — were some of the standout performances in an overall stellar night. His vocals and dance moves of the greats before him were spot on.

While Timberlake is not the first to do this, the elevated stage that rose from the front and then moved over the crowd on the floor to the back — a «flying bridge» — was used to great effect (and an opportunity to snap Timberlake up close with cell phone cameras), but let’s hope neither Timberlake nor his backup singers and dancers has vertigo.

He ended the evening with «Sexy Back», then an up-tempo «Mirrors». Timberlake is probably tired of singing «Sexy Back», but it’s one of his biggest and most-well-known hits. That said, «Mirrors» was a great way for Timberlake to take back the night.

One quibble: Timberlake’s vocals were drowned out by the band and music throughout the evening. The band — and backup singers and dancers — are absolutely terrific, but Timberlake is the star, and his singing should be heard loud and clear.

Friday night’s more-than-30-song setlist included «Pusha Love Girl», «Rock Your Body», «Don’t Hold the Wall», «FutureSex/LoveSound», «Like I Love You», «My Love», «TKO», «Strawberry Bubblegum», «Summer Love», «LoveStoned», «Until the End of Time» at a white Yamaha piano, «Holy Grail» leading into «Cry Me a River», then the unexpected 10-minute intermission.

Then «Only When I Walk Away», «True Blood» (styled as tribal EDM), «Drink You Away» (a country-ish song about alcohol with his jam band), «Tunnel Vision», «Seniorita» at the keyboard, «Let the Groove Get In» (as a Latin number mixed in with a little «Conga» by Gloria Estefan and Miami Sound Machine), «That Girl», Elvis’ «Heartbreak Hotel», «Not a Bad Thing» and Jackson’s «Human Nature».

And «What Goes Around … Comes Around», «Cabaret» (with, appropriately, cabaret dancers), «Take Back the Night» (with «the roof is on fire» chant and a little «Jungle Boogie»), «Murder» (with dripping-blood imagery on the big screen), BBD’s «Poison» with the signature dance moves, «Suit and Tie», «Sexy Back» and «Mirrors».