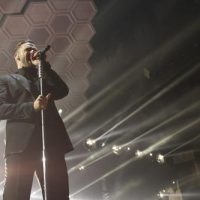 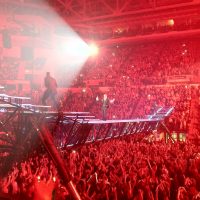 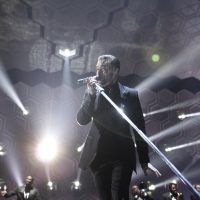 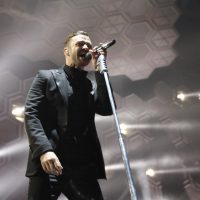 Hartford Courant — If there’s one thing a young performer can learn from 32-year-old industry vet Justin Timberlake, who performed to a near-sellout crowd Thursday night at the XL Center in Hartford, it’s how to work a room.

And by room, we’re talking about a 16,000-seat venue, which, at times during Thursday night’s show, felt roughly the size of a backyard gazebo. Timberlake was backed by the Tennessee Kids, his 15-piece ensemble, who perched behind art-deco podiums and occasionally strolled out to center stage to boogie with the bandleader. A handful of dancers hovered close by as well for most of the show, rarely leaving the star alone.

But it hardly mattered who else was there: from the start of «Pusher Love Girl», the opener, until the final song of the encore, «Mirrors», which wrapped (incredibly) at 11:59 p.m., all eyes were locked on Timberlake.

The show loosely ran down past JT glories — «My Love», «Until the End of Time» and the title track from his 2006 album FutureSex/LoveSound, and «Rock Your Body», «Like I Love You» and a first set-closing «Cry Me a River» from his 2002 solo debut Justified — and several standout tracks from The 20/20 Experience, his two-part year-spanning collection released in March and September: «Gimme What I Don’t Know (I Want)», «Don’t Hold the Wall», the sensual «Strawberry Bubblegum» and the frenetic «TKO». He invited crowd participation before «Summer Love», which segued into the gorgeous «LoveStoned», a first-set highlight. He teased playfully on «Holy Grail», a Jay-Z track, and even rapped a few lines (when it became clear Jay-Z himself wouldn’t be showing up).

More 20/20 songs dominated the second set, including the opening one-two punch of «Only When I Walk Away» (with distorted vocal effects from Timberlake) and «True Blood». Timberlake strapped on an acoustic guitar for «Drink You Away», as the band mobbed together with him, giving us a taste of JT the Indie Rocker (more, please). «Tunnel Vision», «Senorita» (from Justified), «Let the Groove In» and «That Girl» preceded tributes to Elvis Presley (on «Heartbreak Hotel») and Michael Jackson (on «Human Nature», via JT’s own «Not a Bad Thing»), two musicians who bookend his palette of influences.

The XL Center shrank even more during the show’s home stretch, as a section of stage lifted off the ground, suspended by two enormous hydraulic lifts, and traveled to the back of the room. Timberlake, legs dangling over the side, seemed to want to visit with everyone. (To say the women in the audience outnumbered the men by a two-to-one ratio would be an understatement, not that the dudes were complaining.) «Are you tired, Hartford?» Timberlake asked, repeatedly, as energy dipped slightly around the Presley cover. «Are you ready to quit?»

Nobody was. Two more newer songs, «Take Back the Night» and «Murder» (via Kool and the Gang’s «Jungle Boogie»), and a four-song sequence — Bell Biv Devoe’s «Poison», «Sexy Back», «Suit and Tie» and the aforementioned «Mirrors» — closed the show. House lights came on exactly at the stroke of midnight; clearly we were being entertained by some sort of time-controlling wizard.

Most striking, perhaps, was how much new material Timberlake covered — and why not? 2013 has been the year of JT. As Timberlake settles into mid-career life as one of planet’s biggest pop stars, it’s a great time to celebrate his latest — and perhaps strongest — material.

The Weeknd (Abel Tesfaye) opened the show with a strong, short set, backed by a trio of musicians on a smaller, front-facing stage.