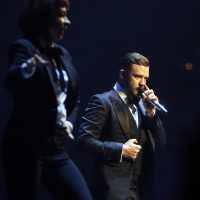 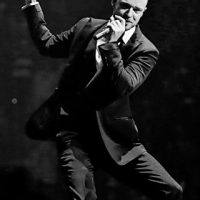 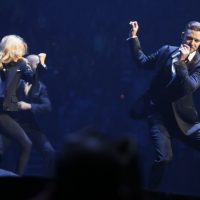 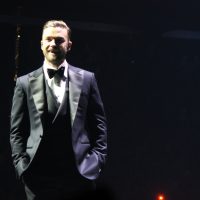 From the moment the tuxedo-clad singer arrived on stage Saturday night — at first taking an extended moment to soak in the squeals of sequined superfans and following with lush, strings-heavy, 10-minute-plus opener Pusher Love Girl — it was clear that a capacity crowd in Nationwide Arena wasn’t in for a quick fling.

Consider the slinky jam My Love. Timberlake opted for a lounge-y piano intro, stretching out the first strains before reverting to the familiar space-tinged song and dance.

The 32-year-old himself sat at a white grand piano while crooning Until the End of Time. He strapped on an acoustic guitar for sizzling gospel-rock lament Drink You Away. Later, with legs dangling from an arena-wide partition, he floated across the room.

Backed by a 13-piece band dubbed the Tennessee Kids, the set list ebbed and flowed between extended-stay slow jams and edgier pop bolstered by plentiful brass and bass.

Sonically, Timberlake has always done his own thing — experimental in terms of mainstream radio, at least — which is why past hits, now a decade old, still sounded fun and fresh.

Shredding guitar competed with the jittery beats of Cry Me A River. The call-and-response segment of Senorita had everyone attempting to hit the high notes. And Rock Your Body adopted a jazzy spin (with no ensuing wardrobe malfunctions).

On the other hand, an evil-cackling, zombie-dancing True Blood was a derivative Thriller clunker. A cover of Heartbreak Hotel, while rollicking, didn’t suit his range.

Given the show’s size and scope, Timberlake’s sturdy but not legendary falsetto could drown at times amid the din.

There was little, though, to nitpick about the affable entertainer fully aware of his star status.

«I don’t know about y’all», he told fans during one of numerous freestyle dance breaks, «but I’m killin’ this».

Anyone there would gladly have been his victim.

Columbus Alive — When Justin Timberlake took over Nationwide Arena for a sold-out show on Saturday he delivered a performance nearly as well-tailored as the Tom Ford suit he donned for the evening.

For almost three hours the pop star moved with near-surgical precision. His dance moves were crisp, his vocals on the mark and his wardrobe, as expected, impeccable. But while he often appeared to have everything together onstage, cracks showed beneath the surface on bitter breakup tunes like «Cry Me a River» and «Only When I Walk Away», which took a cue from its title and casually meandered down several musical byways, even briefly flirting with a bossa nova groove.

On «TKO», Timberlake received the knockout hit rather than delivering it, moaning «See what you do?» as drum volleys echoed powerful body blows designed to finish him off.

Similarly bruising sentiments surfaced in «What Goes Round…Comes Around», a tear-streaked number where the singer’s pliable falsetto ably conveyed his heartache. «Is this how we say goodbye?» he sang, his voice suggesting he was in no way ready to part. Instead he attempted to dull the pain with alcohol (a country-ish «Drink You Away»), immersed himself in similarly downcast classics (an ill-suited cover of Elvis Presley’s «Heartbreak Hotel») and, when all that failed, he simply threw himself at the hottest girl in the club. «I hope she’s going home with me tonight», he cooed on «Love Stoned».

Still, Timberlake, 32, remained a gentleman throughout; even his raunchiest dance moves wouldn’t have raised so much as an eyebrow amongst the chaperones at a fundamentalist Christian prom. Not that he didn’t try to adopt a bit more edge. The singer cursed sporadically, played a video that included female nudity («Tunnel Vision») and, prior to asking the audience to «put two fingers in the air for Michael Jackson», he raised a single digit to an ex on a snarling «Cry Me a River». But even these instances felt somehow forced or out of character for the genial singer, who got an obvious thrill out of conducting the audience in an «O-H»/«I-O» chant, gleefully covered Bel Biv DeVoe («Poison») and filled his songs with all manner of flirtatious asides. «Tell me how you got that pretty little face», he sighed on one tune.

Furthermore, the musician appeared to be doing his part to singlehandedly lower the unemployment rate; he invited a small army of accomplices along for this tour, including an 11-piece band, four backup singers and a half-dozen dancers.

Timberlake took full advantage of the expanded cast, stretching out songs and allowing them to grow and move in unexpected ways. «My Love», for one, might have only lasted only six minutes or so, but it still spanned decades, opening as a turn-of-the-century piano ballad before giving way to a more modern digital pulse. And while these explorations sometimes faltered — occult «Thriller» homage «True Blood» had more moving parts than the elaborate stage, which included a massive, rolling catwalk and several trap doors — credit the musician for refusing to allow either himself or his audience to settle into a comfort zone.