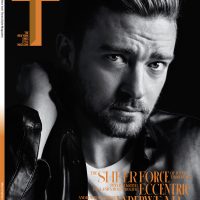 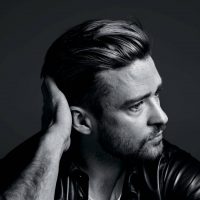 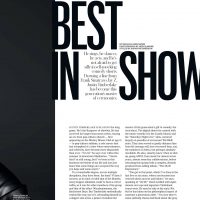 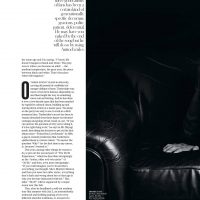 He sings, he dances, he acts, and he’s not afraid to get silly in self-mocking comedy shorts. Drawing a line from Frank Sinatra to Jay Z, Justin Timberlake has become this generation’s master of ceremonies.

JUSTIN TIMBERLAKE IS PLAYING the long game. He’s the Kasparov of showbiz. He has survived far longer than most artists, tracing an arc from pop-culture absurd — first appearing on the Mickey Mouse Club at age 11 — to pop-culture sublime, a solo career that has triumphed at a time when entertainment, and celebrity, have become more disposable than ever. «I’m 32», he says over coffee this summer in downtown Manhattan. «I know that I’m still young, but I’ve been in this business two-thirds of my life and you just learn that some things are accepted the way you hope and some aren’t».

To a remarkable degree, across multiple disciplines, they have been: his band ‘N Sync’s success, at its time, rivaled that of the Beatles; teeny-bopper adulation could’ve been a velvet coffin, as it was for other members of his group and that of the other ’90s phenomenon, the Backstreet Boys. But Timberlake methodically worked his way out of it, rebranding himself as a dapper solo artist, a picker of modest but choice acting roles (most notably as Sean Parker in «The Social Network») and as a master of this generation’s gift to comedy, the viral short. The digital shorts he created with the music-comedy trio the Lonely Island, and his «Saturday Night Live» skits, centered largely on parodies of oversexed ’90s R&B stars. They also served to gently distance him from his teenage self, less oversexed than, say, the members of Jodeci, but perhaps similarly mockable. He also, smartly, knew when to shut up, going AWOL from music for almost seven years, absent some key collaborations, before returning this spring with a complex, densely produced best-selling album, «The 20/20 Experience».

«You get to this point, which I’ve done in the last five or six years, where you become less worried about success and failure», he says, speaking of «20/20», which is filled with eight-minute rave-ups and signature Timbaland trance-outs. He may be only in his early 30s, but he has taken on the philosophical aspect of someone a generation older. «I’m sure there’s some self-help cheese-ball book about the gray area», he says, «but I’ve been having this conversation with my friends who are all about the same age and I’m saying, ‘Y’know, life doesn’t happen in black and white’. The gray area is where you become an adult . . . the medium temperature, the gray area, the place between black and white. That’s the place where life happens».

Others spend years in obscurity, carving off pounds of credibility for meager dollops of fame. Timberlake was more or less born famous, disposably so, and then fought his way to something more real and lasting. And he has done it over a two-decade span that has been marked by rapid-fire cultural churn, building up and tearing down artists at a manic pace. You jump on the party bus only to see it crash in a ditch moments later. Timberlake’s secret has been to remain detached from these hyper-accelerated comings and goings of fad, trend, in, out. «If you can answer the question of why you’re doing it, it’s the right thing to do», he says in Mr. Miyagi mode, describing his decision to put out his first album since «FutureSex/LoveSounds» in 2006, a gap in content production that would have spelled doom to a lesser talent. «To answer the question ‘Why?’ for the first time in my career, is: because I wanted to».

This year, among other things he wants to do, is put out the second part of «The 20/20 Experience», which he describes intriguingly as the «hotter, older evil twin sister» of «20/20», and then, even more intriguingly: «If you could imagine you’re 16 and she’s everything you thought. She’s Marilyn Monroe and then you meet her older sister; everything that’s dark and wrong about her at that age is why you become infatuated with her». Hot, older «20/20″ will be supported by a major arena tour this fall.

This, after he headlined a sold-out stadium tour this summer with Jay Z, an intermittently awkward and thrilling pairing of two very different showbiz traditions, or at least two people who learned very different things watching Frank Sinatra. Jay Z took Sinatra’s suit-and-tie phlegmatic self-confidence, merged it with hip-hop’s swagger and created a model for the 40-plus black artist/businessman that is unprecedented in the genre. Timberlake took from the crowd-pleasing Sinatra, bringing back the idea of the «performer»: the all-singing, all-dancing entertainer, whose craft didn’t interfere with showing the fans a good time. Along the way, thanks in part to the growing amount of time spent collaborating with Jay Z, he has modeled a new kind of postracial, postmacho white male.

Timberlake appears in two movies this year. In the first, «Runner Runner», he plays a Princeton student and online poker player who believes he was swindled out of his tuition money and goes after the site’s shady owner, played by Ben Affleck. In December, he has a memorable cameo as Jim Berkey in the Coen brothers’ «Inside Llewyn Davis», a dry comedy very loosely based on Dave Van Ronk’s life and the Greenwich Village folk scene of the ’60s. I say loosely because Van Ronk’s life, as captured in the book, «The Mayor of MacDougal Street: A Memoir», is a rollicking tale about New York folk at the literal moment before Bob Dylan and the ’60s were about to turn this whole little jewel box of bohemia into Pompeii. The movie, by contrast, lingers like a persistent melancholy.

When the Coens called, Timberlake had actually just watched Martin Scorsese’s documentary «No Direction Home: Bob Dylan», and when they asked if he had heard of the now largely forgotten Van Ronk, who played a kind of Salieri to Dylan’s Mozart, they were surprised to hear he had. Dylan, Timberlake says, «jacked a little of Van Ronk’s thing and made it his own».

Berkey is the husband and singing partner of Carey Mulligan’s Jean Berkey, who (improbably) cuckolds Timberlake’s character with the husky, E.Q.-challenged Davis, played by the relative newcomer Oscar Isaac. Timberlake’s role is a small one, but his Berkey is a significant foil to Davis, who is the most talented musician in the story, but has no ability to connect with audiences.

Timberlake’s Berkey, unencumbered by neuroses about authenticity and craft and gazing ingenuously at the world around him, looks destined for mainstream success. It is a sly Coen brothers joke: one can see them clearly identifying with the hirsute, curmudgeonly Davis, fighting Talmudic battles with shadows; Timberlake’s Berkey just floats through the whole scene. «Talent doesn’t always equal success», Timberlake says, drawing a universal connection. «A case can be made a lot for that».

Timberlake, it has been said, has gone far on likability, which is also a way of mildly patronizing him. He is his generation’s dapper master of ceremonies, turning up as a reliable good time on everything from «Saturday Night Live», to «Jimmy Fallon», to the MTV Video Music Awards and, of course, the Super Bowl. But what has let him bridge over multiple iterations and now three generations of fans has been a certain kind of generationally specific decorum: gracious, polite, patient, deferential. He may have you naked by the end of this song, but he will do so using Antioch rules. This quality was much mocked in the wake of his apologies for that «wardrobe malfunction» at the Super Bowl in 2004, wherein he had Janet Jackson’s right breast naked at the end of their joint performance. An apology? How . . . polite.

And even as his lyrics are strewn with references to twerking and booties, he seems unable to express current pop culture’s quasi-porny sexuality with anything approaching conviction. Timberlake’s «dirty» video for «Tunnel Vision», which showcased him almost moping about an empty studio intercut with images of naked dancing women, was notably less «hot» than the exuberantly «dirty» video released a few months earlier by Robin Thicke, who has positioned himself as a kind of Timberlake 2.0 cyborg. Timberlake, who like Thicke is married, looks miserable and isn’t even shot in the same space as his naked dancing girls. Timberlake doesn’t do R-rated well.

By inclination and design, Timberlake is positioned apart from the prevailing trends in music, fashion, sensibility. None of these interest him particularly, and his refusal to engage with the ephemera of a particular pop culture moment may in fact be his secret. This moment, and indeed, many of the previous moments, have been driven by technological change. «A lot of people in our biz want to write songs that people want to hear and make movies that people want to see», he says, «but if the medium is changing at such a rapid pace, the question is, How do you do that?» His answer is to look sideways at iconoclastic artists he admires — like Josh Homme of Queens of the Stone Age, Dave Grohl, Trent Reznor or Kanye West — and backward at artists who were able to transcend their moment and create something that mattered years later. Like who? His name-checks would make a boomer’s heart skip a beat: Janis Joplin, Aretha Franklin, Dylan, Bobby Womack and his fave, Donny Hathaway. «The 20/20 Experience» is aural Spielberg: entirely original yet drenched in five decades of dense pop music history.

Technology, he says, has jammed so much newness into the culture that culture has not figured out how to respond yet. As a result, «There’s not as much substance» in music. Speaking to the nadir — the end of the last decade — he says, «All the soul of it was removed. It was made for whatever the trending medium was. . . . You had two or three different female artists who were doing literally the same song, just different song titles. They are saying the same thing with the same melody, with the same B.P.M».

This is not to say that Timberlake is some kind of purveyor of nostalgic pap à la Michael Bublé. The 2013 J. T. experience may lack the industrial thwap of dub-step, now scrambling your innards in every car commercial, but that’s because, as he says with uncharacteristic edge, «Tim [Timbaland, his producing partner] and I were doing that seven years ago. Someone put some cocaine on top of that, and it turned into what it turned into». And it’s true. Have you listened to «FutureSex/LoveSounds» recently? It sounds even better now than it did then, hit after hit laid into a skittering, luscious flow that is pure sex — pure, parent-approved, consensual sex, that is.

Which brings us back to his role in «Inside Llewyn Davis» and the Village folk era. Timberlake reveres Dylan, but he also understands Dylan as largely a construction, an artistic projection. «I always bring up Robert Zimmerman. ‘Do you know who Robert Zimmerman is?’ They say, ‘Who’s that?’ Look it up». Van Ronk, in his memoir, describes the Dylan persona as a kind of freestyle riff on who he thought Woody Guthrie really was. Van Ronk’s memoir describes Dylan as so cosmically full of it that he himself probably had no idea what was true and what wasn’t.

Timberlake takes a different moral from the story of Van Ronk and Dylan. He sees the Dylan persona as «methodical», and that constructedness, he says, is the very essence of how an artist connects with his audience. It’s called performing, and performing is a noble calling, a kind of greater realness. The authenticity is in the ability to make the connection. «I try to talk to people about how much acting goes into music», he says. «How much of a character goes into what you put on stage. You ever sit down with Jay? He’s not the guy he is on stage. I’m not the guy I am on stage. I am a performer. It’s an elevated idea».