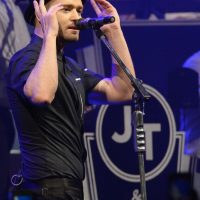 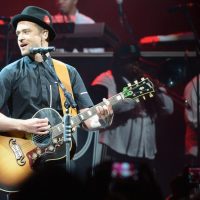 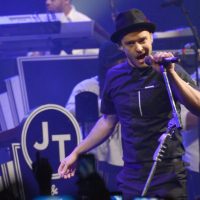 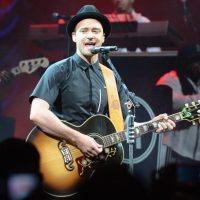 Justin Timberlake redefined the title of his latest release «Take Back the Night» when he took the stage at the Fillmore Miami Beach at 2:26 a.m. Saturday and performed an 80 minute set as part of his series of Master Card Priceless private concerts.

His 16 song performance was after his 2 and a half hour show at Sun Life Stadium with Jay Z on Friday night.

Despite the fact it was the first and only time during the Legends of the Summer tour that Timberlake performed two shows, you couldn’t tell by his effort. His voice and pitch were spot on, his dance moves were just as sharp, and the 11-man band complete with lively four-man horn section never missed a beat.

The only thing lacking energy in the famed concert hall was the crowd, who filled the front of the stage but seemed more concerned about recording video of Timberlake on their cell phones than actually dancing or singing to the music.

Regardless, Timberlake, dressed in all black and sporting a black fedora with a red feather (alas Miami must be too hot for his trademark tux), sang a range of hits from all of his albums, taking the crowd back to his Justified days by opening with «Like I Love You» and twisting up «Rock Your Body» with a sample of Jay Z’s «I Just Wanna Love You».

He danced with his backup singers for a cover of the Jackson 5’s «Shake Your Body», he stepped up to the piano for «Senorita» and seemed to channel some personal feelings when he sang «Cry Me a River» with anger and finished the song by flipping off a pair of middle fingers. He got the crowd to finally come to life and earn that 10 rating during his latest single «Take Back The Night» getting everyone to clap in unison.

And by 3:44 a.m. he brought out Timbaland as a surprise guest to close the show with «Sexy Back» for his one-song encore.

In all, Timberlake showed why he is among the smoothest entertainers in music today, never missing a falsetto, and how we have missed his talents on the stage (albeit for a few History of Rap viral videos with Jimmy Fallon). His command of the stage and the evening (early morning?) made you realize he could host, say, an awards show with ease. Hopefully it doesn’t start at 2:30 in the morning.