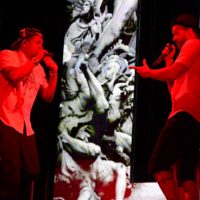 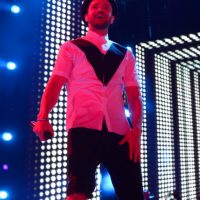 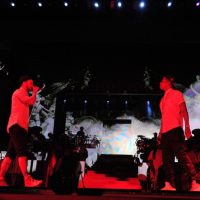 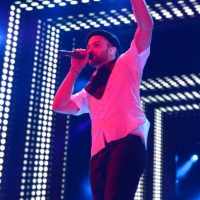 From the very first moment it was announced, the «Legends Of Summer» tour featuring Justin Timberlake and Jay Z always looked like a guaranteed home run. But as the duo arrived at Yankee Stadium last night, the true scale of their combined slugging power revealed itself to be more exciting and exhausting than anyone could have imagined.

For nearly 2 1/2 solid hours, they delivered hits on the scale of Derek Jeter, and the 60,000-strong crowd soaked it all in on the hot, sultry night.

Hitting the stage just after 9:20 p.m., the opening set saw the pair tossing the mic back and forth, seamlessly melding Timberlake tracks like «Rock Your Body» and «Like I Love You» with Jay’s «On To The Next One» and «Big Pimpin’ « into one giant blur of brilliance. And that was just the first 45 minutes.

With the first act dispensed with, the newly de-hyphenated Jay Z was first to step up into the limelight with a lean and lithe solo set. Even though his latest album, «Magna Carta . . . Holy Grail», felt like a phoned-in anticlimax, his prowess on stage remains unarguable as the quicksilver delivery on «Jigga What, Jigga Who» emphatically demonstrated.

But even during Jay Z’s solo stint, it was Timberlake who was subtly revealing himself to be the star of the show. During «99 Problems», in particular, the former ‘N Sync star supplied the brutal guitar stabs, threw in the riff to Aerosmith’s «Walk This Way» and even managed to play the part of the track’s infamous racist cop. Between the two of them, they turned a bonafide rap classic turned into a little piece of theater.

For his stint, Timberlake took things down a much-needed notch to show off the soul boy tropes from his «20/20 Experience» album. Even with the 90-degree heat causing the sweat to visibly pour off his face, he never missed one note, one move or even one sultry glance toward the front row.

On any normal night, the sight of Alicia Keys guesting on «Empire State Of Mind» would have been the perfect way to end proceedings, but in the end, she was merely a footnote. Jay and Justin used the star’s appearance as a springboard for their final flurry of jams. First, Jay laid out «Run This Town», then Justin followed with a sensational version of «Mirrors» and a Timbaland-aided «SexyBack» before they both finally folded with a suave take on «Suit & Tie» and «Young Forever» dedicated to Trayvon Martin.

The Bronx has seen many a bro-down over the years, but when these two get together, it produces a level of kinship that is truly unique. It’s something you can (and should) witness for yourself when the «Legends Of Summer» tour makes a repeat performance at Yankee Stadium tonight.

Maybe this really is the stuff of legends.

Jay-Z and Justin Timberlake’s «Legends of the Summer Tour», which arrived at a sold-out Yankee Stadium last night and returns again Saturday night, is a surprising musical partnership on so many levels. It’s unheard of for two acts at the top of the music industry to team up this way — Jay-Z just landed his 13th No. 1 album for «Magna Carta Holy Grail», and Timberlake’s «The 20/20 Experience» is the year’s biggest-seller so far.

Yet here they are, looking completely at ease, even in the sweltering heat, helping out on each other’s songs seemingly ego-free as they walk across the massive stage in centerfield.

The «Legends» tour breaks down in the same way Billy Joel and Elton John did when they established this kind of superstar pairing with the «Face to Face» tours — with Timberlake and Jay-Z performing together, then doing separate sets, and then closing together.

The success of the show was in the collaborations. Timberlake took over where Pharrell sang on Jay’s «Just Wanna Love You (Give It 2 Me)», while Jay offered vocal encouragement during Timberlake’s «Rock Your Body».

Because of the live band and Timberlake’s versatility, the opening to Jay’s «Izzo», originally a sample of The Jackson Five’s «I Want You Back», could be extended, with Timberlake singing lead.

On Jay-Z’s «On to the Next One», Timberlake played keyboards. He also took on guitar duties for «99 Problems», where he also performed the role of the song’s policeman character.

The biggest moment of the night, though, came from the combination of Timberlake doing «Theme From ‘New York, New York’ « and Alicia Keys joining Jay for «Empire State of Mind», making the argument that their song will eventually join the Sinatra classic in the city’s musical canon.

It showed how Timberlake and Jay-Z were able to push each other to new heights. And as long as that continues, this odd couple has a future.

Jay Z and Justin Timberlake Are The Legends of the Summer

Friday night at Yankee Stadium was something like a double header of epic proportions–not talkin’ baseball.

Two of the biggest names in music sold out the home of the Bronx Bombers for a live, musical experience of a lifetime.

Given the individual success Justin Timberlake and Jay Z have had thus far in 2013 — with Hov earning his 13th number one album and JT owning the current best seller of the year — the «Legends of the Summer» tour title is certainly fitting for the two «Suit And Tie» superstars.

Although Jay and JT may be categorized as hip-hop and pop (or neo soul according to Wikipedia) respectively, every genre on the musical spectrum was felt in some way, shape or form last night, and the visual components that complemented each individual track were nothing short of genius. No two songs were accompanied by the same set of digital graphics on the backdrop. From a virtual haze of smoke and Greek mythical statues during «Holy Grail», to a simulation of traveling through a tunnel during «Tunnel Vision», the imagery was spot on, taking the experience to a whole other level.

When the opening number — «Holy Grail» — came to a close, Jay antagonized the crowd asking, «You call that noise New York?» encouraging the 50,000 or so spectators to get hyped. He proceeded to rhetorically ask, «Are you ready for a legendary show?»

The audience didn’t even finish roaring before Hov hit them with «I Just Want To Love You (Give It To Me)». Though we all know the track’s a Pharrell feature, in the absence of Lil Skateboard P, JT sufficed just fine, setting a precedent for him to fill in the gaps for the features on all Hov’s tracks for the duration of the concert.

As the night progressed, there was nothing but the sounds of hits emanating from 161st street and Jerome Ave. Even in the midst of a heat wave, the crowd stayed on their feet, holding their diamonds up and spitting their favorite Hov classics, and singing along to JT’s sweet melodies.

The two J’s made it impossible to forget that they both came to tear down the house. Despite not having an entire album’s worth of collaborations — like Jay and Kanye had for their Watch The Throne tour — they leveraged each other’s uniqueness to execute the most memorable performances possible. From JT tickling the keys on «On To The Next One» to him narrating the role of the police officer on «99 Problems», the two artists from different worlds meshed their talents impeccably.

One of the biggest highlights of the evening was Justin Timberlake belting his heart out on Sinatra’s «New York», doing the (fellow) legend complete justice. Jay subsequently entered the stage to follow up with «Empire State of Mind», and brought Alicia Keys with him just to make the night more epic than we could have asked for. Shortly after, JT brought out Timbaland to join him for their chart-topping hit «Sexy Back», making the second and last guest appearance of the night.

The last two tracks of the evening were «Suit and Tie» — during which they did whip out their suit jackets, ties, and a champagne flute for Hov — and they bowed out with «Forever Young».

Beneath a stage beaming hot lights and in sweltering, 90-degree plus weather, I don’t know how they managed to pull off such a flawless show. I salute their passion, talent, dedication and supernatural homeostatic mechanisms alike.