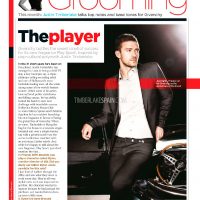 Justin Timberlake doesn’t have any ambitions to create his own fragrance.

The musician-turned-actor launched his own fashion label William Rast in 2005 but said he isn’t interesting in branching out in the perfume industry.

Justin feels more relaxed in his current role as the face of Givenchy scent Play Sport.

«I don’t think I would ever make my own [fragrance] – this is more comfortable for me. I don’t aspire to have my name on a fragrance», he told GQ magazine.

Speaking of his role as ambassador for the scent, Justin explained why he wanted to get involved in the campaign.

The 31-year-old revealed that as well as being a fan of the label’s work, he felt the project reflected his own lifestyle and interests well.

«I’m a huge fan of Riccardo Tisci, so it seemed like a great partnership. I love Riccardo; I love his work. Givenchy as a brand is classic but it’s also very modern», he gushed.

«It seemed like a very cool thing to do. I don’t create notes for the fragrance, I talk in a broader way, more about the lifestyle and what I think makes sense for the both of us in this partnership; that’s more the impetus and that’s my relationship with the project».

Justin Timberlake appreciates being styled by «Oscar-winning costumers» for film roles, as it doesn’t happen «every day».

The musician-turned-actor enjoys mixing up his look for movie characters. Justin has explained which on-screen garb he has grown accustomed to in the past, and named the outfits that weren’t so flattering.

«I’ve had some pretty well-dressed characters: Sean Parker, who wore suits all the time. I’d say the worst dressed was Scott in Bad Teacher. Some of those sweaters were just ridiculous; the one with the bone latch was really funny. I would say Will in In Time had some of the coolest clothing I’ve worn. It’s not every day you get Colleen Atwood, Oscar-winning costumer, dress you», he told the British edition of GQ magazine.

Justin also explained that rather than pick up style tips from his characters, he tries to bring his own style onto the film set.

The 31-year-old heartthrob said working his character into his movie wardrobe helps him to relate to the role he is playing.

«I put a little bit of how I dress and little bit of who I am into every character because [that way] you find something to relate to», he said.

Justin Timberlake says he has «a lot» of regrets when it comes to his hair.

The star has sported a number of different cuts over the years, but not all of them were considered a style success.

The 31-year-old is currently rocking a neat crop but he infamously sported a full head of peroxide curls when he was part of ’90s boy band N’Sync.

«I’ve had a lot [of hair disasters], but they were more in my teenage years. We don’t talk about those…». he quipped in an interview with GQ magazine.

Justin keeps his skincare and hair routine quite simple, but named the products he can’t live without.

«The only thing I pack that I travel with is Ole Henriksen facial cleanser, something that my skin is used to, to avoid using different soaps at different hotels all the time and Givenchy Pro-Energizing Massive Moisturiser. I usually keep my hair pretty short, too, so I don’t require a lot of stuff», he said.

Justin Timberlake tries to «ignore the catering» when he is working on a movie.

The singer-and-actor strives to keep in shape and has a disciplined exercise and diet regime. Justin admits that spending long hours on movie sets can make it difficult to resist eating junk food in between takes.

«You have to ignore the catering. It seems like a pain, but it’s really not that hard to monitor your own calories once you get it down. Plus, sometimes I can up my intake because I’m working 12-hour days and burning a lot more energy, especially on a movie like In Time, where it was so physical», he told UK magazine GQ. «All that diet and health stuff really revolves around the movie or show. I’m sure that there will be a project where I need to look unhealthy; I’ll have to figure that out when the time comes».

Justin has appeared in movies including The Social Network, Bad Teacher and In Time. Filming can take months to complete, so he must ensure he doesn’t lose or gain too much weight during this time.

«Sometimes I wake up and stretch and do 20 minutes on the treadmill, or anything to just break a sweat. And then I have the weekends where I can get out and play nine holes and maybe go to the gym. So I try and moderate it. It’s kind of like running a marathon. The hardest part about making movies is staying the exact same weight every day and looking the same», he said.