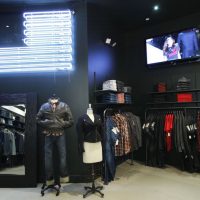 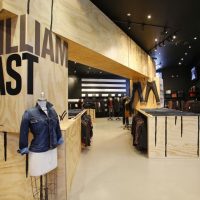 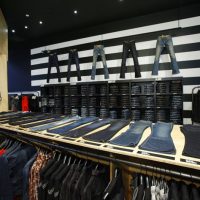 William Rast, the «New America» denim lifestyle brand founded by Trace Ayala and Justin Timberlake, and operated through subsidiaries of People`s Liberation, launched its retail expansion plan for the brand with the opening of two new full-price retail stores at the Westfield Century City Shopping Mall in Los Angeles, California, and the Westfield Valley Fair Shopping Mall in San Jose, California, just in time for the holiday shopping season. Additionally, the Company opened its first outlet store at the Desert Hills Premium Outlets in Cabazon, California. The retail expansion is part of the Company`s plan to roll-out approximately forty retail stores in major metropolitan locations over the next several years.

The William Rast branded retail stores, each approximately 2,000 square feet, will offer shoppers the entire William Rast contemporary apparel collection for men and women, including signature denim, silk tops, leather jackets and accessories. In the future, the Company also plans to offer a full range of licensed William Rast products in each store.

«We are extremely pleased to announce the initial rollout of our planned retail expansion with these three new store openings», said Chief Executive Officer, Colin Dyne. «These new retail locations underscore our commitment to showcasing and enhancing our brand. With a dynamic population that is connected with the William Rast brand, we see tremendous opportunities and a good strategic fit to further expand awareness of the brand».

The Desert Hills Premium Outlet store will be William Rast`s first outlet store, and will be in the company of brands such as Burberry, Coach, Dior, Dolce & Gabbana, Gucci, Prada, True Religion, 7 For All Mankind, Yves Saint Laurent, Zegna, Lucky Brand and many more.

Mr. Dyne commented, «The Desert Hills Premium Outlets is one of the most popular and trafficked outlet malls on the West Coast and gives us a focused off-price channel for our prior season merchandise. With our own outlet store, we can better manage and control the distribution of inventory, yet do so at attractive margins».

The premium denim and contemporary sportswear brand, cofounded by Timberlake and his friend Trace Ayala, unveiled its fusion of a Hollywood lifestyle with Tennessee roots in three California stores that opened Nov. 1, heralding the launch of 40 to 50 units by 2012.

The new shops are the Westfield Century City shopping mall here, the Westfield Valley Fair shopping mall in San Jose and an outlet store at the Desert Hills Premium Outlets in Cabazon. Stores in Chicago, New York, San Diego, Las Vegas, Miami and Scottsdale, Ariz., are to debut in 2010. The company also targeted Germany, the U.K. and Japan for units. Coinciding with the retail rollout will be next fall’s introduction of shoes to complement the trendy jeans, weathered leather jackets and plaid shirts produced by the four-year-old brand.

«From a product perspective, we have the full collection», said Colin Dyne, chief executive officer of People’s Liberation, the Los Angeles-based company that operates its namesake brand, William Rast and the U.S. business of J. Lindeberg. «Retail is the perfect environment for us».

William Rast’s rollout is forging ahead despite the uncertain economy. In fact, Dyne said economic conditions were an advantage in negotiating for prime real estate and competitive leases for stores between 1,500 and 2,000 square feet.

«The timing we felt is perfect with the economy and the softness in retail», he said.

Unlike denim competitors who have raised their retail flags on high-profile streets such as Robertson Boulevard and Melrose Place in Los Angeles, William Rast opted for shopping malls. Dyne said he will step outside of the mall in cities such as New York, where the company is considering a spot in SoHo near the J. Lindeberg store on Spring Street.

«The top 25 to 30 malls fit our demographic», he said. «Foot traffic is important to us. Generally in this environment, the mall is thriving better than the street locations».

Dyne declined to disclose how much the company is spending on the expansion. However, he forecast each store would generate $700 to $1,000 a square foot in the first year. Such results will give a «significant» boost to profits of People’s Liberation next year, he said. In the second quarter, People’s Liberation reported net income of $526,604 on revenue of $9.9 million, reversing a net loss of $456,732 on revenue of $6.7 million a year ago. Its retail distribution ranges from 500 specialty stores such as Planet Funk to department stores including Nordstrom, Saks Fifth Avenue, Neiman Marcus and Bloomingdale’s.

Working with the Los Angeles-based architecture firm Johnston Marklee, William Rast transported the rugged Americana found in Timberlake and Ayala’s home state of Tennessee to Tinseltown for an aesthetic dubbed New America. In the 1,850-square-foot store in Century City, the design offsets matte black shelves filled with jeans retailing for $165 to $245 with wide planks of plywood, which were seamed together to create high tables and an angular arch stretching above shoppers’ heads. Vintage dress forms show off the $350 men’s houndstooth blazer, $229 women’s jean jacket and $250 vest dotted with grommets.

For its New America, William Rast also reworked the U.S. flag via the Bauhaus art movement by removing the 50 stars and replacing the red and white stripes with black and white streaks. The avant-garde emblem is interpreted as a white neon sign hanging against a black wall, a mural and the irregular black streaks painted by artist Colin Roberts on the plywood panels.

Booming through the stereo speakers is a mix of rock and blues tunes that Timberlake compiled for the soundtracks played during the brand’s fashion shows. In addition, Timberlake can be seen taking a bow at the end of the fall 2009 runway show playing on a TV screen in the store. Other than that, there’s no visible sign of Timberlake in the store. It’s a deliberate move to distance William Rast from the cult of personality that often swarms — and sometimes detracts from — a celebrity brand.

«We’ve always made sure that it’s about the product first», Dyne said. «We use Justin in the right ways. He was in our first ad campaign and he’ll be in our next ad campaign».