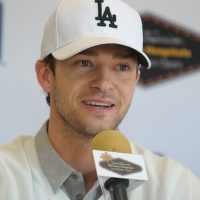 Q: Most guys who like golf will play a few rounds each week, maybe catch the telecasts on TV. You put your name on a PGA Tour event. That’s dedication.
Justin Timberlake: Well, it’s way more selfish than you think. Really, it’s just an opportunity for me to hang out on the range and watch pros hit balls, you know? Out of all of the things that I get to do, this is probably one of the cooler things. And to top it off, we’re raising money for an amazing cause. At the end of the day, there are a million ways to raise money, but if you can actually have fun and play golf at the same time, it’s like, why wouldn’t you do that?

Q: You just trumped my next question. When’s that going to happen?
Justin Timberlake: I don’t know, man. I’m sure the guy is pretty busy. Didn’t he win there as an amateur?

Q: As a tournament host, are you more Bing Crosby, Sammy Davis or Bob Hope?
Justin Timberlake: Well, I would say I’m probably a little bit of all three. Wasn’t Bing recognized as one of the best celebrity golfers as far as skill level? Wasn’t he really good? So my answer to the question is I’d probably try to be like Bing Crosby, but I’d probably wind up being slightly more like Bob Hope as far as skill level is concerned [laughs].

Q: Speaking of skill level, any thoughts about trying to play in your own tournament? Just a wild guess, but I bet you could pull a sponsor’s exemption.
Justin Timberlake: You know what? You’re giving me an idea.

Q: You’re listed as a 6-handicap. How’s the game right now?
Justin Timberlake: I’m playing to about that. Right now my index is a 5.2 or something. I haven’t looked at it recently, but the last score I posted was last week, and it was pretty true to that handicap.

Q: That’s pretty solid.
Justin Timberlake: Man, you know what it’s like. Do you play?

Q: Of course.
Justin Timberlake: Then you know what it’s like. I’m comfortable with that handicap. That handicap for me travels well. It gives me a couple of shots and forces me to play good golf all the time. For somebody like me, I don’t get to work on my game as much. I don’t have a lot of time to just go to the range and hit balls. The times that I get on the golf course, it’s like, ‘Well, I’ve got a day off, I should go play’. That’s the most fun is actually getting to go play. But if I had time, I could become a range rat, easily. I could sit out there for hours and just chip and putt and work on everything.

Q: What kind of competition are you usually playing against? Are you getting strokes or giving ‘em?
Justin Timberlake: One of my buddies at Lakeside, he’s actually a plus-1, so I’m getting shots. But then sometimes I’ll play in groups where one of my other buddies — actually, the co-founder of 901 [his tequila company], my buddy Kevin — I give him like 2 shots a side. So I have both experiences. I could tell you which one I favor — that’s pretty easy [laughs].

Q: Do you get more nervous on stage or on the first tee?
Justin Timberlake: Oh, man. Ask Tiger Woods if he’d get nervous to sing a song, and there’s your answer. He was born with a golf club in his hand, and I was basically born onstage. That comes a little more naturally to me.

You get on the first tee, and 20 dudes could be there. And for a guy like me, I open myself up to it by playing in things like the U.S. Open Challenge, because they show your good shots on television. They show you making par on your first hole out of the bunker and putting for birdie on the second hole and things like that. You hear Roger Maltbie say, ‘Wow, Timberlake actually had a chance to go into the red on a U.S. Open course!’ And then you go out to the golf course and people, just based on what they saw, expect that. I’m like, ‘By the way, I shot an 88, so there were, like, 80 other bad shots that they didn’t show on television’.

Q: You’ve got a whole bunch of Grammy awards. Would you trade ‘em all for a PGA Tour victory?
Justin Timberlake: Ooooh, yeah, I might. That would be a tough one not to contemplate. I don’t know how to answer that one, but I will say this: I recently got an ace. It was a 185-yard hole. And I can tell you that I’ve won six Grammys, and those are my career highlights — but I can also tell you that getting an ace is a life highlight. So I don’t know how to answer your question, but I can tell you that much.

Q: I’ve got to ask you: When you get an ace, do you dance like your character does on the Tiger Woods video game?
Justin Timberlake: You would have thought I was Landon Donovan. I actually ran around the green like I scored a goal in the World Cup. Me and my buddies ran around the green like little kids on a playground, screaming and hollering. I was tempted to peel my shirt off and yell at an imaginary crowd.

Q: Did you call the local paper with the club and yardage so you could get your name in there?
Justin Timberlake: [Laughs] Honestly, man, that’s sort of the thing about being me sometimes is I don’t have to do that. You know, bad news and good news travels fast in this day and age.

Q: Well, let me give you a chance to gloat about it to the world now. Give me yardage, club selection, tell me about the shot.
Justin Timberlake: Awesome. Thank you. It was the third hole at Lakeside, par-3, playing about 185 yards, maybe 182, somewhere in there. Wind was in my face. It plays pretty level, not too much uphill or downhill. But if you’ve ever played Lakeside, you know the greens are like pool tables — they’re tiny. It’s normally either a full 6 or a smooth 5. With the wind in my face, I elected to hit the 5. And I actually hit a draw into the wind. It landed in front of the hole, bounced in back of the hole and spun back, right into the hole.

Q: It’s even nicer spinning one in there.
Justin Timberlake: It was one of those things where my buddy was playing with me and he said, and I quote, ‘Dude, that went in the hole’. There have been so many times where the ball disappears behind the flagstick, you know what I mean? So I was like, ‘Nah, it didn’t go in’. I thought it was long, but I got a little love from the wind, and it spun back in the hole. He literally sprinted 185 yards to the hole. He got there and he started jumping up and down, then we’re all jumping up and down. We were actually playing in a fivesome; we were playing with an extra guy, so there were actually five of us jumping up and down.

Q: Sorry to drop this on you, but I think that means it’s an unofficial hole-in-one.
Justin Timberlake: No! No way! Listen, they can delete the Memphis Tigers [basketball team’s 2007-08] record, but we all saw them whupp a bunch of dudes’ asses.

Q: Let me switch gears because I know you could talk about this for another hour. You were named by GQ as the Most Stylish Man in America. Who’s the most stylish golfer out there?
Justin Timberlake: Wow. I like Camilo [Villegas]’s style. I’m not mad at Tiger and Anthony [Kim]’s style, as well. Everybody’s kind of got their own thing. Anthony, it’s almost like he’s got a skateboarder’s mentality out there. I kind of like that style. But I also like Jesper [Parnevik]; I like how he’s changed up his style in the last four or five years.

I tell you what: I think that Johan Lindeberg has single-handedly done a number on the style of the sport. I mean, you even see Phil [Mickelson] out there in more form-fitting clothing. It’s cool to me that a lot of the style of the game is going back to form-fitting things. It’s kind of one of those things where I wish they didn’t have to play so much of their golf in hot, hot weather because I’d like to see some of the Sam Snead tweeds come back into the game.

Q: I’m not letting you off the hook without asking about the least stylish player. Who needs a makeover?
Justin Timberlake: Oh, I don’t know, man. I’m not gonna blow anybody up.

Q: OK, but I want you to find somebody during tournament week. Work the range, find one dude who isn’t getting it done and outfit him in some stylish clothes.
Justin Timberlake: That might not be a bad idea.

Q: You purchased your home course back in Tennessee and renamed it Mirimichi. How are things progressing there?
Justin Timberlake: Oh, it’s fantastic. It’s not exactly a vacation destination, but if you do get a chance to go through there, you’ll be stunned at how beautiful that place is. You’ll walk around and say to yourself, ‘I can’t believe this is actually an eco-friendly establishment’.

Q: You’ve been at the forefront in calling for courses to go green. What prompted such a fight, and how would you assess the issue right now?
Justin Timberlake: It was kind of like a shot in the dark. It was one of those things where I know there are eco-friendly courses in the world, but I wondered why places in the United States weren’t asking more questions like that. But what I found was we were able to pull it off because we ended up gutting the whole course anyway. So in the process of completely restructuring the irrigation, that’s how we were able to do it.

Q: How cool is it to own the place? Can you just show up at the first tee and say, ‘Everybody out of my way. I’m playing through’?
Justin Timberlake: Pretty much [laughs]. No, I wouldn’t do that, but it is pretty cool. The best thing about it, really, is doing something to give back to the community. That’s really the best part.