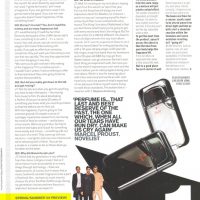 Celebrity Can Be Cool

In an era when both the Ministry Of Sound and Pop Idol launch fragrances, it’s hard to get worked up about celebrity endorsement – a phrase that jumped the shark when Jade Goody launched her own line called Shh…Justin Timberlake, however, is another matter. Despite a pop career lasting 13 years, he has rarely lent his name to anything beyond children’s charities. So why would he put his might behind Givenchy’s new fragrance for men, Play? Well, for one thing the timing couldn’t be more perfect: as a brand, Givenchy is set for an imminent revival, thanks to designer Riccardo Tisci stepping up to take the reins on menswear. Its latest collection for spring 2009 went down a storm in Paris, and suddenly everyone is talking about the label again. Still, for Timberlake, it’s quite a gamble. GQ was puzzled as we faced him across his suite at the Four Seasons, Paris, on the day of the fragrance launch.

GQ: So why this collaboration?
Justin Timberlake: First of all, I haven’t worn cologne in ten years, since the days when I’d drench myself, until I realised I didn’t want to smell like something else, I wanted to smell like myself. So when Givenchy appraoched me I said, «I gotta be honest, I don’t wear a fragrance. If you can get me to wear it, it’s gonna have to be good. If you can win over a guy who doesn’t wear fragrances, it’ll be something fresh».

GQ: But isn’t it a risk? You don’t need the money and so many fragrances fail.
JT: I would be lying if I said the fact that Givenchy being part of the LVMH family didn’t have something to do with it — it’s a classic brand. Very old school, upscale, and classically elegant. So I knew I’d be working with quality. If you get an offer from someone, sometimes they just want your face and you can see that very quickly. The way they approached me, from the get go it was like, «We want you to get involved in the making of the fragrance». I’m a creative person — I wouldn’t do it unless I had something to offer to their brand and they were going to let me explore that possibility.

GQ: But did you really get down to the lab and get mixing?
JT: Not the lab, but when you get into anything you have to learn the basics — like moving from music to film. It’s about developing a rhythm. Once you’ve done 20 takes of something you know what you need to put down so that the editors can do their job. With the fragrance, if you’re going to find common ground, it’s maybe a sense of nostalgia. I read some research on men loving the smell of food on women — vanilla bean, citrus scents. We’re very primitive. So they’d send me test tubes and I’d ask for something more woody and citrusy — something with not too much of a smell. They came up with two versions — one lighter and one more intense and we’re releasing both of them. You can be a model or a creator as far as these deals go. I’d rather be the latter.

GQ: Why did Givenchy ask you?
JT: I think that my generation is very different from the classic cologne crowd. I feel as if we’ve had so much accessibility to so many things through technology — there are repercussions, of course, but it means that in music, fashion (I consider fragrance to be a part of fashion), film…we have so much more to choose. It’s all on the iPod, 5,000 songs. Giving my generation choices and new flavours is important, because we expect it.

GQ: Is this endorsement about you being in all the places that generation choose to be?
JT: If you’re in every medium they’ll just get sick of you quicker.

GQ: So what is it about?
JT: Well, I’m working on my next album, hoping to get it out this autumn or top of the year. For me, the thing that will always be most impressive about the Beatles, for instance — and in no way am I comparing myself to them — is how much their music evolved with every record. The thing I love about Radiohead is that you don’t know which band you’re going to get with every record and that’s the intrigue. But for a solo artist, it’s a little bit different. You have to have a bridge between the way each album sounds. So if I want to experiment I have to do it with my record label. I’m writing and producing with a 19-year-old pop singer, a 29-year-old folk singer, a rap/rock band from my hometown and a 23-year-old R&B hip-hop girl from Staten Island. I can go wherever the hell I want. Each thing you experiment with, the more you try, the more it improves your own work and the more it allows you to make progress doing your next album. Which is true for messing about with citrus and wood and vanilla as well. I just have to try not to be aware of what’s expected of me, because I’d drive myself insane trying to meet those standards. The bottom line is — have fun with it.