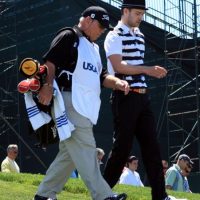 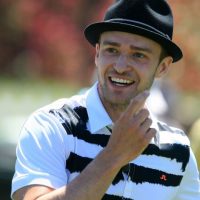 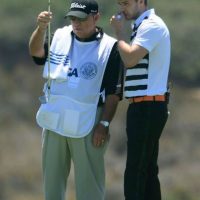 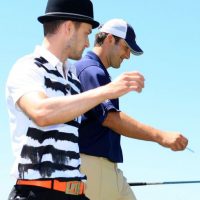 They Played Their Hearts Out
No birdies and no putts longer than 20-feet were made, but Tony Romo (84) and Justin Timberlake (98) managed to break 100 while Matt Lauer (100) and Contest winner John Atkinson (114) didn’t

LA JOLLA, Calif. — The Golf Digest U.S. Open Challenge Friday was instructive, which is to say that it met its own challenge, and in the process proved that Tiger Woods was right.

A year ago, Woods said at Oakmont CC, site of the 2007 U.S. Open, that a 10-handicap couldn’t break 100 there. That became the challenge for a foursome of single-digit amateurs, who played the South Course at Torrey Pines, site of the 2008 U.S. Open next week, largely from the back tees Friday.

«They’re inhuman, how well they stripe it», Timberlake said of the professionals who — albeit better armed on the talent front — will face the same challenge next week. «We’re just proud to be a part of actually showing it».

Not a single birdie was made, and the longest putt holed was a 20-footer Lauer made for par at the last hole. Atkinson failed to make a single par, yet he was the winner by anyone’s measure. A year ago, Atkinson was diagnosed with inoperable lung cancer.

His own personal gallery included an estimated 60 people, family and friends from his hometown of Omaha, who spent the six hours, 15 minutes it took the foursome to complete the round loudly encouraging his every swing. So did the the celebrities in his group and their caddies, who included Greg Norman (looping for Lauer) and Butch Harmon (working for Timberlake).

«I had a great time», Atkinson said. «I had a certain score that I wanted to hit, but that wasn’t going to happen. But I feel it’s like life — you’ve just got to keep going».

Atkinson bogeyed each of the first four holes, according to a game plan that called for him to hit hybrids off the tee to keep the ball in the fairway and to play for bogey. After that, «the wheels came off», he said, and he was unable to reattach them.

«For a guy who’s played one member-guest [tournament] in his life it was pretty impressive», said his own caddie, renowned sport psychologist Bob Rotella. «I think he felt very good about it».

The course also won, incidentally. «It’s hard to tell anyone how thick that rough is», Rotella said. Atkinson played one shot from the rough when he couldn’t actually see his ball, he said.

Romo, clearly the best player in the group and one who has entered U.S. Open qualifiers, was in thick rough off the tee at 18 and swung as hard as he could with a sand wedge and advanced the ball only about 20 feet and into a fairway bunker.

«I think we’ve got the rough about right», said Mike Davis, the USGA’s senior director rules and competition.

SAN DIEGO (AP) — Dallas Cowboys quarterback Tony Romo failed to qualify for the U.S. Open, but he showed up Friday at the Torrey Pines South Course anyway to prove that he can at least break 100.

Romo joined a foursome that included singer Justin Timberlake, «Today» host Matt Lauer, and a regular guy from Omaha, Neb., in an effort to disprove Tiger Woods’ theory that it takes a pro to beat the course.

The beefy quarterback, who boasts a 2.2 handicap index, played the first nine holes in 5-over 40, barely breaking a sweat despite the pounding midday sun.

«It’s pretty clear what I’m doing wrong», he chuckled at the fifth hole. «I’ve got to hit bogeys instead of quads».

Timberlake, outfitted in a dashing black trilby hat and tuxedo-stripe pants, started hamming it up with the gallery once his taut dancer’s swing started to go south, blowing on the ball as it rimmed the seventh hole without any luck and asking the crowd to approve his re-drop into the rough at the edge of the fairway.

A 6.0 handicap index, Timberlake finished the front nine at 17-over 52.

He couldn’t blame his troubles on Mother Nature, either, after he skipped off the course after teeing off at the first hole and making a beeline for the men’s room.

«Excuse me! I knew I forgot something», he called out to laughing spectators in his soft Tennessee drawl.

But the biggest cheers went to medical salesman John Atkinson, who was chosen from 56,374 essay applicants to play in the challenge. Atkinson, who is undergoing treatment for advanced inoperable lung cancer, brought a 56-person cheering section with him, who shouted «C’mon, Johnny!» when his ball hit the green and gave sympathetic claps and «awws» when he disappeared into the bunkers.

His friend, Dave Leahy, said the crowd joined Atkinson as he trained in Omaha to prepare him for the pressure playing in front of an audience.

«He was out there every Saturday with 50 people pretending to be the gallery and wearing a mike so he’d get used to it», said Leahy.

Atkinson, a lanky, loose player with an 8.1 handicap index, started promisingly, matching Romo and Timberlake bogey-for-bogey, but was trailing by the ninth hole, when he hit 10 coming out of sand for double-par. That brought him to 24-over 59.

He didn’t seem fussed, giving his caddy, sports psychologist Bob Rotella, a sweet shrug after chasing the ball around the green before making his putt on the fifth hole.

«It’s a once-in-a-lifetime experience for him», said his wife, Lori. «It doesn’t matter».

Woods told reporters last year at Oakmont, generally considered the toughest golf course in America, that no 10-handicapper could break 100. With Torrey Pines refurbished into a par-71, 7,643-yard «monster» — the longest in U.S. Open history — it served as a suitable stand-in for the challenge, hosted by Golf Digest magazine and NBC.

Torrey Pines, named for the rare gnarled trees that dot the cliffside course, will be the first city-owned golf course to host a U.S. Open starting next Thursday.