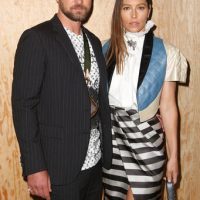 The 38-year-old musician couldn’t help but gush about his wife of almost seven years, Jessica Biel, when speaking with ET’s Brooke Anderson in his hometown of Memphis, Tennessee, as he joined the kids of Stax Music Academy as part of the Levi’s Music Project. Timberlake is launching his new Levi’s «FRESH LEAVES» fall collection on Tuesday, and he couldn’t help but sing his wife’s praises to ET.

Noting that The Sinner star has changed him «in so many ways», Timberlake adds that Biel helped him through a tough time last year when he was put on vocal rest and had to cancel several shows.

«I think anybody out there, you know, you go through anything, to have somebody by your side to really go through it with you and get in the mud with you, so to speak, I’m sure you know what that’s like», he says.

He adds that he’s in it for the long haul with Biel, who is the mother of his 4-year-old son, Silas.

As for the future of his family, Timberlake notes, «I’m just enjoying the ride».

The artist jokes that he wouldn’t let his son Silas get involved in the entertainment business, adding, «I’m kidding. I don’t know. Luckily he’s four and I don’t have to think about that yet».

In addition to working on new music, the artist also created an entire song lab in collaboration with Levi’s at Stax Academy.

«This is the song lab, but this is not the only one», he showed ET. «This is specific to these instruments, and there’s other rooms where they get to work with things hooked up to their laptops, and they can program music as well. I want them to make live music and sequence music and bring it all together».

Working closely with kids on music, Timberlake had a blast.

«It was honestly it was one of the best experiences I’ve ever had, you know?» he says. «They were so talented and they take notes so quickly».

And though they were working with a music superstar, Timberlake notes there was more excitement than intimidation.

«I think they were really excited to have all of us here», he says. «They were very excited when I think we were a surprise».

Admitting some of the kids freaked out «a little bit», Timberlake adds, «It’s always nice to feel that energy».