The Man Of The Woods Tour, Indianapolis, IN, EE.UU. +26 imágenes 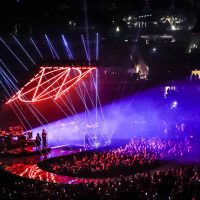 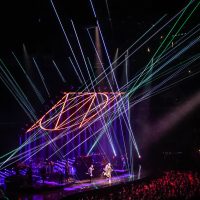 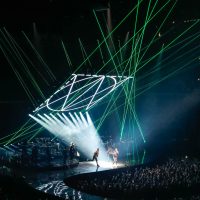 Justin Timberlake ventures into solid but not spectacular ‘Woods’ in Indianapolis

Indianapolis Star — «Earthy» sums up the concept of Justin Timberlake’s 2018 album, «Man of the Woods». But the project brought Timberlake down to earth Tuesday at Bankers Life Fieldhouse.

Although the pop star gave his fans a memorable night of dance tunes, Timberlake didn’t up the ante in his unofficial duel with Bruno Mars for the title of «Mr. Entertainment».

Timberlake held the crown when playing shows to promote 2013 album «The 20/20 Experience», with Mars staking his own claim when hitting the road to promote 2016’s «24K Magic».

Tuesday’s performance represented a slight regression for the ‘N Sync alum. The glitz and glamour of «20/20» gave way to denim and camouflage gear associated with «Man of the Woods». And the concert’s highlights arrived with songs released before «Woods».

The roughing-it aesthetic shouldn’t be interpreted as being cheap. The great outdoors informed a stage design that stretched across the arena floor — including a snaking catwalk, a circular satellite stage at midcourt and a horizontal play space at the back of the room. A handful of «trees» lined the path, and a mock campfire popped up during an unplugged segment of the show.

Unfortunately, elaborate lights-and-speakers rigging above the arena floor contributed to a garbled sound mix for attendees in the venue’s lower level. Speakers circled the lofty rigging to provide clear and direct sound for fans at club level (and OK-to-decent tones in the balcony). In the lower level, echoes caromed in the absence of primary speaker coverage.

Playing a makeup date for a December show postponed because of a case of bruised vocal cords, Timberlake told the packed house, «Thank you for waiting for us». When greeted by thunderous applause, he bowed to convey the universal «I’m not worthy» gesture.

Modesty suits Timberlake. Within the lyrics and arrangements of «SexyBack», «Suit & Tie» and «Rock Your Body», he retained the edge that’s earned him post-boy-band acclaim.

And granted, comparisons to Mars are meaningless. It is fun, however, to watch each artist excel as a master of song and dance.

Check out three ways Timberlake came across as solid, if not spectacular, in Indianapolis:

The show opened with four consecutive dance tunes («Filthy», «Midnight Summer Jam», «LoveStoned» and «SexyBack»), with no breathers in between. Timberlake, 38, glided as impressively as he did as an ‘N Sync teenager. With assistance from his supporting cast, the ever-active Tennessee Kids, Timberlake bookended his night with a run of four dance tunes: «Rock Your Body», «Supplies», «Like I Love You» and «Can’t Stop the Feeling».

Be smart about where you live: Get an IndyStar subscription today

Timberlake took full advantage of his production’s possibilities on «Suit & Tie» (a «20/20» selection) and «Cry Me a River» (from 2002’s «Justified» album). Propelled by a dreamlike vocal intro, «Suit & Tie» featured Timberlake in a camo blazer and matching pants as he executed mic-stand tricks at the back of the room. After moving to the center satellite stage, Timberlake sang and danced to accompany a futuristic and fractured laser show.

During «Cry Me a River», Timberlake walked on the catwalk’s fog-machine «river». Scrims dangling in the front, center and back of the arena delivered video of «tears» as the song neared its crescendo. At that peak, guitarist Mike Scott summoned a metallic solo that inspired headbanging among his fellow Tennessee Kids.

«Earthy» did have its moments on Tuesday. «Drink You Away», recorded during the «20/20» era, conveyed backwoods authenticity with the musicians committing to the song’s groove as if it were a three-day bender. Meanwhile, Timberlake stretched out «Drink’s» closing statement — «I can’t swim out of this skin I’m living in» — with believable dread. Credit «Man of the Woods» track «Montana» for conjuring a Big Sky electronic vibe. Timberlake employed an effective falsetto to heighten the wide-open sensation.