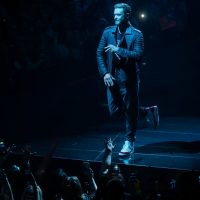 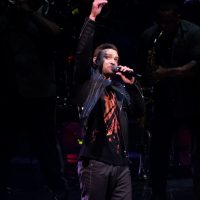 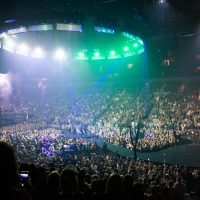 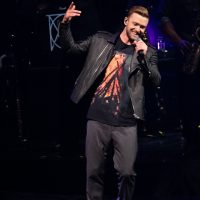 St. Louis Post-Dispatch — Justin Timberlake’s attempts at being a «Man of the Woods» drew mixed results as folks questioned the album’s spotty stab at going Americana, coming from such a slick pop superstar.

His No. 1 debut on the Billboard 200 with the album was assured, it being Justin Timberlake and all. But the music failed to exhibit any staying power and went away unheralded.

But then there’s the live show. Blowing the «Man of the Woods» concept up to arena-level stages doesn’t necessarily bring it into better focus (why the flannel and forest imagery if you’re not going to commit to it?). But during Timberlake’s tour that came to Enterprise Center on Thursday night, he without a doubt re-established himself as the premier pop male performer. Take that, Bruno Mars.

The show didn’t start off in top form. Opening song «Filthy», the first track from «Man of the Woods», is a nonstarter both as the album’s first single and the concert’s opening salvo, though packing the opening song with a laser display at least elevated it visually.

And Timberlake’s vocals were noticeably muddled; it’s incredible these things can still be an issue. As the show settled in, that became less noticeable and was overshadowed by the bigness of the show itself.

Across a stage design that included a catwalk that twisted and turned throughout the arena floor and a series of transparent screens creating all sorts of eye-popping displays, the show was a sight to behold from a production standpoint, the wow factor ever present.

Productions of this magnitude — and this was among the largest — can swallow up an artist, but Timberlake managed to stay afloat amid the spectacle of it all. He was constantly everywhere, performing on the main stage and singing and dancing up and down the catwalk, his own path through the woods, while flanked by his big crew and dancers, musicians and backing singers.

Songs such as «SexyBack», «Cry Me a River», «Like I Love You», «Can’t Stop the Feeling» and «Mirrors» kept the familiar grooves popping as choreography held at peak levels, keeping fans and Timberlake on their feet all night including a segment featuring Timberlake dancing inside a circle of lasers during «Suit & Tie», and dancing amid the crowd on a lighted portion of the arena floor during «Rock Your Body».

Timberlake graced a set of upright keyboards during «Senorita», fired up a loop machine for added effects during «My Love» and took a turn on acoustic guitar during a more stripped-down portion of the show, surrounded by his fellow musicians on the center of the catwalk during «Drink You Away».

That acoustic energy carried over to a campfire setting for «Until the End of Time» and «Morning Light», while he continued strumming away on «Say Something» and «What Goes Around … Comes Around».

Timberlake’s setlist, at 22 songs, wasn’t overwhelming, nor did it contain any surprises, sticking pretty much to the obvious hits and songs from «Man of the Woods». A few of the new selections such as «Higher Higher» and «Midnight Summer Jam» gave reason to reconsider the album, though «Supplies» and «Filthy», both performed here, did the opposite.

Timberlake took a break to wish a young girl happy birthday and give her a hug. He also took time to acknowledge some of the signs fans displayed and said the first baseball game he attended was in St. Louis when he was 8.

The concert was rescheduled from December, when Timberlake pulled all of his shows that month off the schedule to recover from some vocal issues.

Justin Timberlake setlist:
«Filthy»
«Midnight Summer Jam»
«LoveStoned»
«SexyBack»
«Man of the Woods»
«Higher Higher»
«Senorita»
«Suit & Tie»
«My Love»
«Cry Me a River»
«Mirrors»
«Drink You Away»
«Until the End of Time»
«Morning Light»
«What Goes Around…Comes Around»
«Say Something»
«Montana»
«Summer Love»
«Rock Your Body»
«Supplies»
«Like I Love You»
«Can’t Stop the Feeling»

The St. Louis American — Pop star Justin Timberlake lived up to every bit of his reputation as the personification of fun when his Man of the Woods Tour played before a sold out crowd at Enterprise Center Thursday. It had been more than five years since Timberlake visited the city. And because of vocal cord issues towards the end of 2018, St. Louis had another few months to wait. But last night he made a special connection with the place where he told fans he saw his first baseball game when his family came up 55 North from his hometown of Memphis to catch the St. Louis Cardinals in action when he was eight years old.

For their patience — and for providing him with that memory — Timberlake served up an unforgettable night of music and dance that resulted in an exchange of pure joy between him and the audience.

The crowd should have had clue that they were in for a party from the time they entered the arena. Timberlake’s sleek black lacquer set stretched across the entire length of the venue. On each side in the center were bar stools and a designated dance area — Club Timberlake, if you will. DJ FreeStyle Steve had Club Timberlake — and the rest of Enterprise Center — hype with club hits from past and present. V.IC’.s «Wobble», Cupid’s «Cupid Shuffle» and Sugar Hill’s «Apache» were just a few of the dance tracks that kept everyone on their feet and prepped them for the party that was in store by way of Timberlake.

Young Canadian pop soul singer Francesco Yates seemed virtually unknown to Timberlake fans, but their lack of familiarity didn’t affect his short set. Based on the blue eyed soul sound of his music — and the confidence he exuded while playing for such a huge and unfamiliar crowd — Yates was a good fit as a featured performer.

The dance music fans in the audience may not have known his name, but they could have been familiar with his voice. He provided the vocals for German DJ and record producer Robin Schultz’s international hit «Sugar». Yates used the song to culminate his performance of selections from his self-titled EP, his new song «Somebody Like You» (which included a mashup of Prince’s «Diamonds and Pearls» and a cover of Bruno Mars’ «Finesse».

The man of the hour took the stage with the intention of providing a completely vibe from his most recent visit. As far as ambience, Man of the Woods was the antithesis of the 20/20 Tour. The dapper Tom Ford tuxedos and crisp white postmodern set were scrapped for super casual clothes and trees sprouted along the set that ended with a patch of grass and a camp fire. He even started the show with «Filthy». Yes, the song is featured on the album for which the tour is named. But it is also a clear deviation from the «Suit and Tie», so fresh, so clean Timberlake fans last saw in St. Louis.

The set and the fashion were casual, but Timberlake, his band and backup dancers gave a show that was orchestrated with razor sharp precision — and further contributed to his legend as a stellar live performer. In a show that clocked just under two hours and featured roughly twenty hits, he proved himself a master of the stage. about twenty of Timberlake’s hits and a few fan favorites — including a country driven arrangement of «I Can’t Drink You Away».

His country and R&B roots were on full display. The title track from his latest album is a blend of both — and he performed over a campfire and set that resembled a rural teen lover’s lane of sorts. He spent most of the show easily keeping up with the relentless pace of demanding dance sequences as he grooved through «Sexy Back», «Senorita», «Love Stoned», «Summer Love» and «Like I Love You».

He slowed things down with «Cry Me A River», «What Goes Around…Comes Around» and «End Of Time».

Timberlake enjoyed more than one tender moment between himself and his fans over the course of the night. He was so overwhelmed after the audience sang every single word of «Mirrors» that he dropped to his hands and knees and bowed to each side of Enterprise Center. And he welcomed a toddler who was celebrating her birthday on stage for a moment in the spotlight and a big hug. «You’ve got to be the most adorable human on the planet», Timberlake said before the little girl back to her family.

She had been dancing the entire night — and wasn’t alone as a child in the audience, which spoke to Timberlake’s intergenerational appeal. Fans of all ages never seemed to let their bottoms touch the seats as they partied from the time he hit the stage until he encouraged them to «dance, dance, dance» out the door with his «Can’t Stop The Feeling» finale.