The Man Of The Woods Tour, Phoenix +14 imágenes 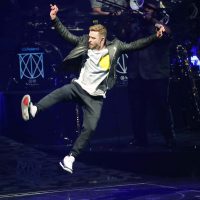 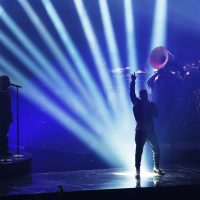 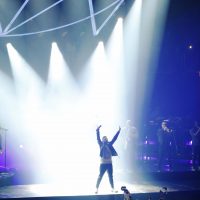 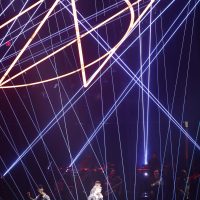 Arizona Republic — Justin Timberlake was 11 songs deep into Tuesday night’s concert in Phoenix — his second stop at Talking Stick Resort Arena in less than a year — when he took a moment to celebrate a milestone.

«I know it took us a little while to get back», he said, referring to the fact that this performance had been pushed back from November when he bruised his vocal cords.

«But we made it back and you know what? It all works out the way it’s supposed to work out because — because! — tonight on the Man of the Woods Tour, this is Show 100».

Having seen those first 11 songs, all I could think was «Man, can you even imagine the number of calories he’s burned in those 11 shows?»

If he ever stopped moving for more than a second or two at a time, I must have missed it.

Whether engaging in the sort of choreography he’s been perfecting since he first rose to fame as the boy most likely to go solo in NSYNC or running up and down that catwalk designed to resemble a path through the woods, he just kept moving, often flanked by a team of six dancers.

The path through the woods, complete with trees, was one of many theatrical nods to the title of Timberlake’s latest release. There were nature scenes projected on the scrims that dotted the arena. And toward the end of the show, a campfire appeared at the opposite end of the arena from the stage, where Timberlake and the Tennessee Kids performed «Until the End of Time».

That was all true of their previous stop at Talking Stick Resort Arena. But Tuesday, the campfire scene was much shorter, foregoing the covers they did last time, which improved the pacing of the show while at the same time sacrificing the surreal sensation of hearing songs by Fleetwood Mac, the Beatles and John Denver at a Justin Timberlake concert.

And for all the woodsy elements, this was a Justin Timberlake concert, going heavy on the songs that lend themselves to dancing, from «Filthy», the opening track on the album for which the tour was named, to the near-euphoric abandon of «Can’t Stop the Feeling!»

That song felt like it was written to bring every Timberlake performance to a smile-inducing, feelgood finish, complete with him busting his silliest, most endearing moves.

The show included eight songs from the new release. But he brought sexy back as well, performing six songs from «FutureSex/LoveSongs», the quadruple-platinum smash from 2006 that spun off several of his biggest hits, including the chart-toppers «SexyBack», «My Love» and «What Goes Around … Comes Around».

If the focus was squarely on dancing and pleasing the crowd, the concert also left no doubt that Timberlake remains a gifted vocalist, as evidenced on such obvious highlights as «Cry Me a River» and «Drink You Away».

The Tennessee Kids brought the feel of an old-school Vegas soul revue to the proceedings, complete with a four-member horn squad and four backup singers, used to brilliant effect in the show’s more gospel-flavored moments.

Filthy
Midnight Summer Jam
LoveStoned
SexyBack
Man of the Woods
Higher Higher
Señorita
Suit & Tie
My Love
Cry Me a River
Mirrors
Drink You Away
[Video Interlude]
Until the End of Time
Morning Light
What Goes Around… Comes Around
Say Something
Montana
Summer Love
Rock Your Body
Supplies
Like I Love You
Can’t Stop the Feeling!