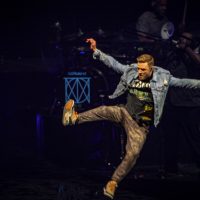 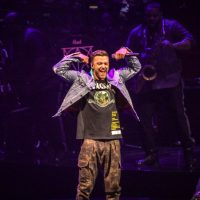 Omaha — There wasn’t a single bad seat in the house.

And the house was packed.

Justin Timberlake reveled in his role as ringleader, a constant smile on his face as he roused the crowd.

For two hours Saturday night, the pop superstar wove his way through the audience, busting moves and busting out hits such as «SexyBack» and «Say Something».

It was a party, and Timberlake was the perfect host, making sure everyone had a good time.

Timberlake’s stage snaked through the crowd from one end of the arena to the other, giving everyone a great view as he danced away through the night.

He glided across the stage during «Cry Me a River», flipping his microphone and letting his falsetto soar through the ballad.

He led the crowd in singing «Mirrors», pushing everyone to their feet to dance along with him.

«Saturday night in Omaha, somewhere in the middle of America», he said. «Y’all really came to party tonight. I feel it».

It was an epic pop show, a masterful performance from a true entertainer with a catalog of memorable pop hits.

The party atmosphere was helped by a massive crowd that hung on Timberlake’s every move.

The audience at CHI Health Center included more than 16,500 — one of the largest ever to fit inside the arena — and the show’s ticket sales notched the biggest number in the history of the building.

«I don’t bring that up to brag», Timberlake said, «but I’m just sayin’. It’s because of all of you».

Timberlake’s show leaned heavily on his latest album, «Man of the Woods», including the songs as well as the album’s aesthetic.

Clad in flannel and camo and denim — and, at one point, a «NebraskaStrong» T-shirt — Timberlake played his club-friendly pop hits as well as songs such as «Drink You Away», «Midnight Summer Jam» and «Montana».

Timberlake popped and slid across the stage with his trademark dance moves — he’s as talented as any of the professional dancers flanking him onstage — but he also strummed an acoustic guitar during a portion of the set that included an actual campfire.

Though Timberlake had to postpone this show from late last year to Saturday because of a vocal cord problem, he showed no signs of trouble.

Timberlake’s voice sounded perfect, and the Tennessee Kids — more than 20 musicians and dancers — were flawless and fun to watch, too.

The party didn’t feel like it was ever going to stop, but it had to eventually.

Like any good entertainer, Timberlake held off his biggest party song, «Can’t Stop This Feeling», to the very end, unleashing the danceable «Trolls» theme as the perfect way to finish the celebration.

«We love you, Omaha», Timberlake said. «Thank you for having us out tonight».