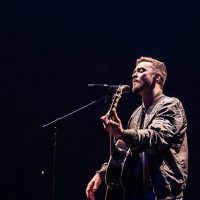 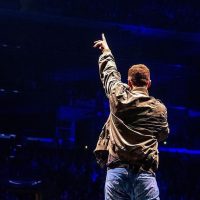 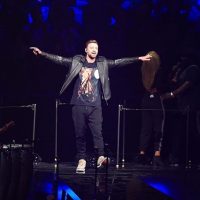 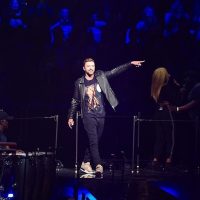 Review: Justin Timberlake is a man — and a pop star — still in the woods

Los Angeles Times — When the pop star at the center of a big arena concert drops to his knees, your hope is that he’s tapping into some primal emotion — or at least pantomiming that experience in a convincing way.

That’s not the feeling Justin Timberlake put across Sunday night at Staples Center.

Kneeling down at the end of «Mirrors», the singer known as one of pop’s most dynamic live performers made you wonder instead if he just needed a little rest to finish the song.

Sunday’s gig was part of Timberlake’s world tour behind his «Man of the Woods» album, which came out last year to lukewarm reviews — and many, many jokes about his back-to-the-land wardrobe — shortly before his even more widely criticized halftime performance at Super Bowl LII. (You’ll remember the projection of Prince onto what looked like a giant bedsheet.)

To make matters worse, an injury to his vocal cords last fall forced Timberlake to postpone a bunch of dates, including at Staples, where he was originally scheduled to play in November.

Now that he’s back on the road, the task at hand is a big one. He’s clearly looking for a reset following an unusually bruising year.

«I know it took me a while to get here, but we’re here right now», he said after that rendition of «Mirrors».

At the same time, he doesn’t want to be seen as caving to those who mocked the rootsy affectations of «Man of the Woods», which sought to showcase this Memphis native’s background as a proud Southerner but offered only shallow clichés in support of that idea.

Here he sang eight songs from the album, as though to insist he hasn’t given up on it.

Yet Timberlake was not up to the difficult job he’d set for himself.

For starters, his voice is obviously still damaged. Again and again on Sunday, he’d sing the first half of a line, then let his backing vocalists (or the audience) take over.

And his dancing was equally weak, with virtually none of the spark he first showed in the late 1990s as a member of ‘N Sync; he was marking moves rather than executing them fully, and the result was that you felt like you were watching a rehearsal.

Timberlake’s low energy was out of sync with that of his reliable live band, the Tennessee Kids, and with the impressive production design, which featured a long, S-shaped stage that extended from one end of the arena to the other.

There was also a real campfire, around which Timberlake and his musicians gathered — after having dipped backstage to change into jeans and flannels — for an acoustic take on «Morning Light».

Of course, the nifty stage tricks could do only so much to distract you from songs as flimsy as «Midnight Summer Jam» and «Montana», the latter of which came accompanied on a video screen by painfully literal images of elk and bison.

Didn’t Timberlake learn anything when «Man of the Woods» came out?

Fortunately, he didn’t L.L. Bean-ify old hits like «SexyBack» and «Señorita». But even when the songs were sturdier, his performances weren’t; near the end of the show, he zoomed through «Rock Your Body» and «Like I Love You» so hastily that you could practically smell the Vicks VapoRub awaiting him in his dressing room.

I should say here that thousands around me Sunday appeared to be having a grand time. Indeed, Timberlake’s ability to fill a room the size of Staples on a school night is proof that «Man of the Woods» hardly killed his career.

And there were a handful of stray highlights — including a lovely «Until the End of Time» — to foster promise that he’ll regain his creative mojo.

But what’s inarguable is that Timberlake, after years of being at the vanguard of commercial pop, has fallen from the front lines; he’s no longer competing with Lady Gaga or Ariana Grande or Beyoncé (his duet partner on a studio version of «Until the End of Time») but simply meeting the market’s demand for middle-of-the-road entertainment.

Which you can imagine is tough for him — maybe tougher than losing his instrument for a spell.

In addition to whatever might’ve been happening with his health, you could sense that anxiety throughout this concert; Timberlake had the look of someone who didn’t want to be there but knew that not being there would be even worse.

So perhaps on his knees during «Mirrors» he was accessing a primal feeling after all — not love or regret or obsession but the creeping fear of irrelevance.