The Man Of The Woods Tour, Fresno +6 imágenes 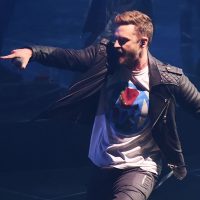 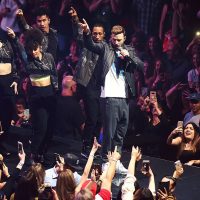 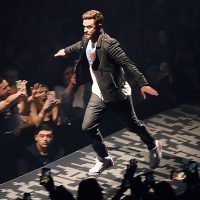 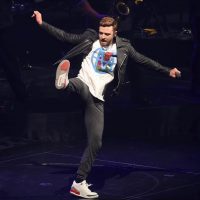 The Fresno Bee — It’s something that’s probably happened every night of the tour.

Justin Timberlake sets his mic down and brings the house lights up some and just starts clapping along with the crowd. At one point, the singer ends up on his knees, bowing to the fans in a show of humble gratitude that feels so very authentic and real — even if you know he’ll do it again tomorrow.

Timberlake took several moments Wednesday night at Save Mart Center (a make-up for last December) to just let the near sell-out crowd be heard.

The moments were quick breaks in what was otherwise an expansive and immersive performance.

The 20-plus song set pulled heavy from Timberlake’s latest album «Man of the Woods», with a few numbers for the old-school fans thrown in («Rock Your Body», «Summer Love»). Throughout, Timberlake served as the singing, dancing, guitar-playing band leader to a massive group of dancers and musicians known as the Tennessee Kids.

As much as this was Timberlake’s show, the 14-piece band (drums and percussion, a full horn section, multiple backing singers) carried most of the weight for the night (on the superb rendition of «What Goes Around … Comes Around» for sure).

THE PRODUCTION
And then there was the stage itself, which was decorated with barren trees and meandered around the arena almost like a river. It didn’t scream «the woods», exactly, but the sentiment was there, especially during «Until the End of Time», when the stage was set as an outdoor campfire scene, complete with woodland grasses.

The stars were provided by cell phone lights.

THE OPENING ACT
Timberlake’s opening act for the night was an impossibly young looking kid who goes by the name Francesco Yates (which he kept reiterating throughout his half-hour set). The 23-year old Canadian singer wears his influences on the sleeve of his leather jacket and rips in his skin tight jeans. It’s George Michael’s butt shake, mixed with Michael Jackson’s dance moves (and falsetto «ooh») and a bit of guitar shredding a la Prince.

Yates was for sure singing to backing tracks for much of the set, though most people may not have noticed or cared.

Before and after Yates, DJ Freestyle Steve was there to get the crowd amped. Which he did in fine form, by playing a series of crowd-pleasing hits (Whitney Houston’s, «I Wanna Dance With Somebody» had the whole house singing).

OTHER RANDOM THOUGHTS
Is Timberlake bringing flannel back? Yes, judging by the number of women wearing it at the show (even if the song did not make it on to the set list).

Timberlake can dance and sing. But he also plays guitar and keyboards. He even makes playing a sampler look cool.

For some reason, the bright yellow «Justin Timberlake is my safe word» T-shirt was not for sale at the merch booth.

The VIP section was the way to go for the hardcore fanatics (the kind with home-made T-shirts. See above).