The Man Of The Woods Tour, Detroit +56 imágenes 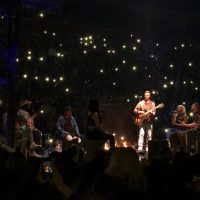 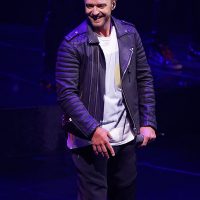 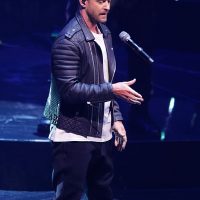 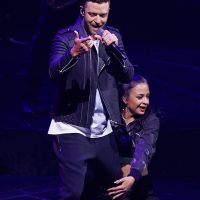 Justin Timberlake takes fans into the Woods at Little Caesars

Oakland Press — It was an extravaganza that certainly wouldn’t be found during an everyday nature hike when Justin Timberlake brought his Man Of The Woods Tour to Little Caesars Arena on Monday night, March 25.

The former *NSYNC-er, in Detroit for the second time in less than a year, pulled out all the stops for the not-quite-capacity crowd. There were strobe lights and lasers galore for the all ages, mostly suburban crowd to ooh and ahh over. This wasn’t just a concert; It was a full-on visual and auditory spectacular.

Built to resemble a river near Timberlake’s childhood home in Tennessee, a ramp from the main stage snaked throughout the center of the arena to an auxiliary stage near the back of the floor. Fake trees were strategically placed along the way and a grassy «field» provided a nice setting for several songs. Thin fabric screens moved up and down to provide the backdrop for projected live footage and various bucolic scenes, ranging from mountains and roaming buffalo to an old-growth pine forest — really driving home the «Man Of The Woods» theme inspired by Timberlake’s most recent album.

Timberlake and his band of Tennessee Kids took full advantage of the space they had to work with. The 14-piece band, complete with a full horn section, two percussionists and several backing vocalists, hit with energy that rarely flagged during the nearly two-and-a-half-hour set, which pulled heavily from the album and had the crowd up for the majority of the show. Timberlake showed off impressive choreography throughout the night, as he and a troupe of six dancers mixed things up from basic boy band moves to a fun, full-stage shuffle with most of the band that had everyone going from side to side in unison prior to «LoveStoned».

«Mirrors» was the cue to take a break when Timberlake really slowed things down and took time to chat with the crowd, even signing the cast of a young fan. He then proceeded to bring out shots for the band, proclaiming, «Let’s keep this party going!» before the crew launched into «Drink You Away». Instead, however, the party mellowed out even more with a video montage and a campfire setting where Timberlake broke out his acoustic guitar and set up camp (literally) on the auxiliary stage with his band for a «Morning Light» sing-along around a faux campfire. The audience provided a twinkling, starry sky with their cell phone lights.

With five albums of material to draw from, there were enough old-school hits thrown in to keep the fans from the early days engaged. He brought «SexyBack» early in the night, while «Suit & Tie» was jazzed up with some Fred Astaire-style dance moves between Timberlake and his microphone stand. A one-two punch of «Summer Love» and «Rock Your Body» near the end of the show got things moving again, as Timberlake hopped into the VIP section of the crowd to dance on a lighted disco floor, ala «Saturday Night Fever».

Timberlake has been a performer for more than half his life, and his professionalism and diverse talent were evident during the show. Not only can he sing and dance, but he also played guitar and keyboards, the latter popping up from the center of the main stage just in time for a performance of «Senorita», which Timberlake prefaced by saying, «Allow me to introduce you to…ME, baby!» He also broke it down DJ-style with a small sequencer board for «My Love» and «Cry Me A River».

It’s been a long time since his days as a Mouseketeer, but Timberlake clearly hasn’t forgotten the value of delivering a show-stopping, no-holds-barred experience. A dazzling rendition of «Can’t Fight The Feeling» shot things through the roof and ended the party on a high note, leaving the crowd with a little sunshine in their pockets as it danced off into the night.