The Man Of The Woods Tour, Columbus +6 imágenes 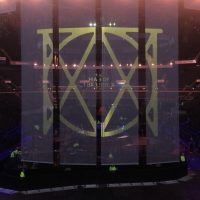 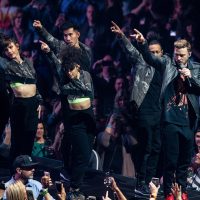 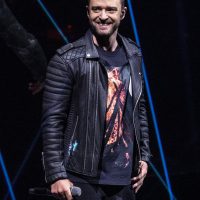 The Columbus Dispatch — Justin Timberlake’s production Sunday night in the Nationwide Arena arguably delivered the pop music star closer to more of his audience than any arena show in recent memory. Timberlake, his band, and dancing entourage roamed freely from one end of the floor to the other — allowing for 360 degree ticket sales — on a serpentine platform maybe 20 ft. at its widest and ending at a home base at the end of the floor.

The lighting was, unsurprisingly, trance-inducing; the choreography — not just of the dancing but every part of the show — seemed as precise as a Rolex; and the musical performances all top shelf. The on-stage population neared two dozen at its highest.

The crowd sang along to nearly every minute and got every penny back from its top-dollar ticket.

Except, maybe, from the star himself. In a strange twist, the celebrity who touched dozens during his swings through the floor, got close from a half-dozen stopping points, and took a couple adventures into the audience itself, was — from a purely musical perspective — under-represented.

That’s not to say Timberlake wasn’t in fine form; his voice was the soul singing marvel heard on record and his dancing as impressive and sexy as ever.

They were nearly overwhelmed, though, by the constant vocal choruses alongside Timberlake’s lead, the echo in the vast venue, and the non-stop singing of the crowd. All of which didn’t diminish the audience’s going gaga over the presentation. (As the performances in the seats come to challenge those from the stage, perhaps future reviews should critique the crowd, as well.)

At the concert’s most intimate moments, Timberlake was fleshed-out best. After a video intermission, a campfire was set at one end of the snake and the performers gathered in back woods attire to focus on the singer’s newest recording «Man Of The Woods». Timberlake sang songs from the album with acoustic guitar and minimal accompaniment in the segment which best revealed his singing talent with material that clearly was less popular than the biggest hits.

«Suit And Tie», one of his finest pop tunes and big hits, though, was delivered earlier with panache and style but fell just a little short under the din of its presentation.

All of that might be just nitpicking, though, as the fever and thrill of Timberlake’s show stood.

Toronto native Francesco Yates opened with a short set brimming with the promise of a young Timberlake two decades ago, while tapping many of the headliner’s inspirations: Michael Jackson, Prince and Motown.