The Man Of The Woods Tour, Vancouver, BC, Canadá +35 imágenes 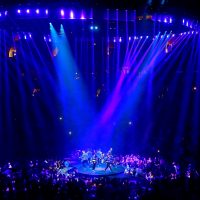 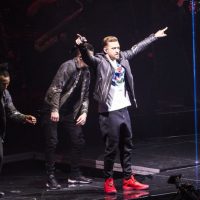 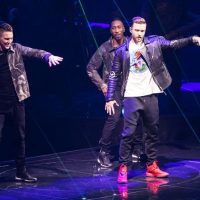 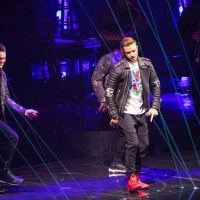 Justin Timberlake Man of the Woods Tour in Vancouver

Vancouver Sun — «Give your sweetie something fine for Valentine’s».

This was the suggestion from the beer hawker who had more basic motivation than romance fuelling their comments.

There was no question that, as date nights go, Justin Timberlake was a dream night out for couples. Plenty were cuddled up at Rogers Arena for the first of JT’s two-night stand. Although an equal number of BFF and mother/daughter pairs packed the venue for the heartthrob hitmaker on his top-grossing Man of the Woods tour.

No annoying snow warning was going to get in the way of catching the spectacle that Timberlake delivered.

From the opening barrage of lasers, strobes and spotlights that introduced the 15-member Tennessee Kids band, 10 dancers and the man himself, it was all about entertaining. The groovy Filthy opened the set and Midnight Summer Jam followed. Both these new tunes are certified crowd killers.

But the response to them couldn’t come close to the way the stadium lost it when Justin Timberlake asked «Vancouver, are you lit up?» During the ridiculously tight extended version of his signature SexyBack.

The man can own a room with his dance moves alone. But the stage came complete with trees and sprouted swamp grass for the Americana with 808s Man of the Woods.

As for the new album marking a return to Timberlake’s roots, everything right down to the Memphis logo on the back of his leather biker jacket is focussed through a decidedly urban R&B lens. And a few Chris Stapleton co-writes don’t change that Man of the Woods in more about what Justin Timberlake and the Neptunes came up with for the album.

And the results mean that Higher Higher blends right into Justified’s Senorita with ease. Very cool the way the bandstand spun around so those behind the stage got some front time. Plus, the drum and percussion solos with the big band horn blasts were awesome.

Hit after hit just kept coming, each seemingly more elaborately choreographed than the next. Without doubt, Cry Me A River was the monster of the lot. Dry ice flowed all over the massive winding walkway stage, the entire room was lit up in cascading projections and it seemed everyone was waving their hands in the air.

Timberlake’s fans are extremely devoted and get the distinction for being the most in tune and on the beat crowd in a singalong in all of pop music. Mirrors was like freaking choir practice.

Even the headliner was bowing down to the room after the performance. Flirty funkateer, sexy dancer, backwoods Montana mansion man, campfire balladeer, bartender to the band — Justin Timberlake is a calculated chameleon. But the meticulously crafted music he makes is always made with the same lead role in mind: Singing Superstar.

Save Bruno Mars and very few others, few male pop artists come anywhere close to delivering the Man of the Woods experience.