The Man Of The Woods Tour, San Diego +4 imágenes 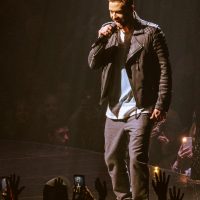 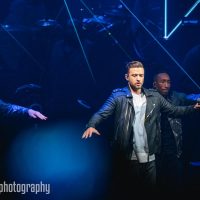 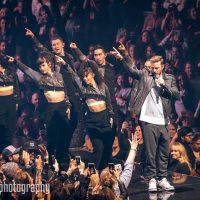 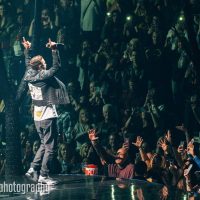 In San Diego, a confident Justin Timberlake shows he’s still got the swagger

San Diego Union Tribune — Justin Timberlake has been at a musical crossroads lately.

He’s hardly irrelevant, despite his questionable status as the undisputed reigning king of pop, a title bestowed upon him in the early 2000s when he segued from boy-band stardom to solo success with his debut album, 2002’s «Justified».

He’s hardly a slacker either, having released his fifth studio album, «Man of the Woods», just a year ago this month.

But has he lost the swagger that catapulted him to superstar status?

The Justin Timberlake we’ve known for nearly a quarter century showed glimpses of his old self — flirty and ebullient with charm to spare — when he brought the North American leg of his «Man of the Woods» tour to Pechanga Arena San Diego on Thursday night.

But something was different — and that’s not necessarily a bad thing.

What we saw Thursday was more than just a man paying homage to his Tennessee roots with an eclectic and experimental repertoire that straddled the fine lines between pop, electronic dance, R&B, soul and Americana.

What we saw Thursday was someone who took us back to the past with hits like «Mirrors», «Rock My Body» and «SexyBack».

What we saw Thursday was someone intent on reminding us of what once was but determined to point us forward, nudging us — no, forcing us — to look ahead.

What we saw Thursday was a Justin Timberlake who had nothing left to prove — to himself or to anyone.

Timberlake, perhaps, is more content with being himself these days than futzing with the superstar crown foisted upon him or chasing a stardom at everyone’s behest.

So what we got Thursday night was Timberlake — opening with the electro-funk «Filthy» and ending with the celebratory «Can’t Stop the Feeling!» — doing whatever he wanted to do.

There was an air of confidence but not arrogance, conviction but not cockiness.

The former Mouseketeer, now 38 and married with child, brought a tour to San Diego so grand and glitzy it pushed the boundaries visually with lasers and strobes and spotlights and smoke. The sprawling stage meandered like a river from one end of the arena to the other, and during «Cry Me a River» — from 2002’s «Justified» — smoke turned the stage into a swampy bayou as Timberlake hit one note after another, much to the overjoyed wonder of fans.

To be sure, Timberlake is a skillful artist who delivers musically — he hits his notes, especially the high ones. But on certain instances Thursday, his voice almost seemed to play second fiddle to the grandness of the show, relegated to the background with futuristic beats and bouncy bass and flashing lights taking center stage. It didn’t help that the arena’s acoustics, historically spotty, muddled the sound so much some lyrics were barely recognizable — a problem quite evident during the performance of Timberlake’s opening act, Francesco Yates.

Timberlake shined most when he dispensed with the trappings of an arena show — the lights, the projections, the smoke — and instead laid bare the rawness of his voice, made real and brought to the fore with a simple guitar, like in the old-school «Morning Light» from last year’s «Man of the Woods» album. He shined, too, during off-the-cuff moments, like when he helped a couple reveal the gender of their second child (it’s a girl).

There’s no question about Timberlake’s calculated brilliance as a musician, but Thursday’s 22-song concert was more than just about the music. It was about a performance. Timberlake prides himself in his ability to transform himself musically, like a chameleon — witness the juxtaposition of synth beats and twangy country notes in last year’s «Man of the Woods». But his concerts go beyond the music. It’s about the experience. It’s about what you’re seeing, what you’re hearing, what you’re feeling — as the deep beats of the drums thump and echo across the arena against the background of colorful laser lights.

Maybe Timberlake, who cancelled numerous concerts in late 2018 due to damaged vocal cords, isn’t at a musical crossroads after all. Maybe he knows exactly where he is and where he’s going and he’s inviting us along for the ride.

A ride to where? Who knows. And do his fans really care? As long as Timberlake’s at the wheel, with a promise of every now and then bringing sexy back, they’re more than happy to hop in.