The Man Of The Woods Tour, Portland, OR, EE.UU. +32 imágenes 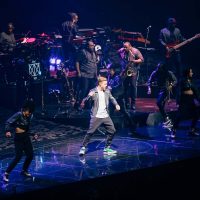 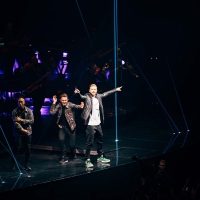 Portland Mercury — When I entered the Rose Quarter last night I wasn’t sure if the concert would be anything like the other seven times I’ve seen Justin Timberlake live. I mean, I knew I could count on him to excite and entertain me for two solid hours, but I was unsure whether his hordes of fans had thinned after a year of less than favorable press. But as soon as I walked in, it became apparent the place was packed. Me and about 19,000 other people (okay, mostly women aged 25-35, gay men, and their respective partners) were teeming with excitement for this «Man of the Woods» thing to start. As I braced myself to be emotionally and physically whelmed by the one true leader of *NSYNC, the dude sitting to my left adorably asked me:
«Have you seen a Justin Timberlake show before?»
«Oh yes», I replied. «I’ve seen him quite a few times».
«In Portland? I’m a first timer». He said, gesturing toward his girlfriend.
«I’ve seen him in Seattle and California too…» I said, before reassuring him that «we’re all in for a treat!»

But the treat was even tastier than I predicted.

In fact, Timberlake’s «Man of the Woods» tour is much more convincing a display than the Man of the Woods album. While maybe that’s because he had the benefit of leaning on the rest of his catalog, many of the songs on Timberlake’s latest are simply more enjoyable in the live format. «Midnight Summers Jam», «Say Something», and «Morning Light», were almost unexpectedly great. And he couldn’t get away from performing some important songs off The 20/20 Experience and FutureSex/LoveSounds. «Mirrors», was magical, as usual, and still never gets old.

I can’t tell you how grateful I am that Timberlake postponed his «Man of the Woods» tour dates so that he could rest his precious, formerly bruised vocal chords. Last night more than made up for it. His voice sounded exactly the way you want Justin Timberlake and his famous falsetto to sound—like Memphis soul mixed with honey and whiskey. He sounded better than this die-hard Justin Timberlake fan anticipated, and further convinced me that he is still in the prime of his career.
On songs like «Drink You Away», «Suit & Tie» and (again) «Morning Light», he sounded better than perhaps I’ve ever heard him before.

The whole experience was held together by a couple things that remain consistent at Justin Timberlake shows: His backing band, the Tennessee Kids is still spectacular and enormous; and the complex stage design that fosters an increased closeness between him and his fans. At one point toward the end of the show, Timberlake went down into the party pit for a dance break-down in the middle of the crowd. In keeping with the Man of the Woods theme, the set also included artificial trees, tall blades of grass, a real campfire on the stage, and stunning transparent drop-down screens that featured projected images of the natural world. Everything was literally spectacular.

One of the first things my confidant and I noticed about Timberlake’s wardrobe (other than being pleased he was sporting the same «Man of the Woods» tee we had just purchased) were the TWO pairs of green and yellow Nike shoes he wore throughout his performance. Looks like someone had fun at the Nike employee store yesterday!

«Did he perform any *Nsync songs?» You might be wondering? Unfortunately, no. Not even that desperately beautiful heartbreak song «Gone». [SIGH] He also didn’t sing «Pusher Love Girl», or «Only When I Walk Away», but those are my only complaints, if you can even call them that.

And while I was unsure of whether Timberlake still has the ability and the sex appeal to pull off all that dancing around he does, after failing to stifle a few primal screams last night, I now realize that that was a silly thing to wonder. Justin Timberlake still has moves, charisma, and near-perfect vocal control.

My condolences to anyone who missed his show last night.

Willamette Week — The uncomplicated beatitude that shines through Justin Timberlake’s legion of fans is sorta singular.

When our Man of the Woods stepped onto Moda Center’s stage Feb. 18, the entire crowd let loose with the roar of a thousand, slightly menthol-damaged jet engines. Still, it seemed like not a damned one had heard his newest album, last year’s Man of the Woods. They were supportive of his new material, but fans of Justin Timberlake aren’t nearly so shallow as to only—or even primarily—enjoy his music. In part, that reflects his sterling brand management and none-bettered charisma, but would Justin Timberlake define himself as a musician first and foremost?

His Moda Center show was, in most ways that matter, a dance performance. On an expanse of eerily luminescent platforms extending the length of the arena, Timberlake led his retinue through playful nods to influences past—The Time, Rhythm Nation—and futuristic. He prowled the stage with a trio of backup dancers who seamlessly shifted shapes toward reptilian posture or mimicked Timberlake movements from just before and moments afterward.

The concert felt considerably more intimate than the explosive effects and narrative-building of his contemporaries. But that undersells the constant movement of Justin Timberlake and crew. Timberlake’s movements and his sweaty, pleasantly bristling effort kept the audience rapt through the duration of his impressive songbook. Rivers were cried. Sexy was returned.