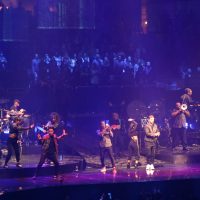 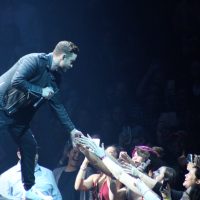 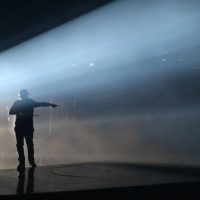 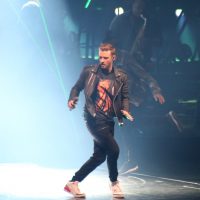 OC Weekly — Timberlake’s son, Silas, whose name means «man of the Forest» in Latin, was the inspiration for the album and tour’s title. This is the sixth concert tour for the American pop star and was originally scheduled to stop at the Honda Center in November, but when Justin Timberlake bruised his vocal cords, he had no choice but to postpone the show. If fans were disappointed by the delay, their positive reactions to his performance proved that feeling was long gone.

The arena went black, demanding uproar in the stands and soon just about everybody was on their feet. Justin Timberlake first appeared as a silhouette on the stage, with white light behind him and in the dark. He was in no rush, taking each calculated step carefully. The album logo lit up above him, he came into view and shouted, «Anaheim, do you know what’s good?» And that was that, an epic night begun.

The tour’s 23 track set list was loaded with award-winning songs like, «Rock Your Body», «Can’t Stop the Feeling», and «Cry Me a River». The best-selling single of all time, «Sexy Back» from 2006 shot a wave of euphoria through the audience as people started to show off their most provocative dancing. Many lost themselves in the song, rubbing their bodies with eyes closed and scrunched faces while singing along.

As a man of many talents, it’s no surprise, Justin Timberlake sure can dance. His creative choreography glides effortlessly on a skill level most could never achieve, flowing flawlessly with every song.

Timberlake performs every concert with an entourage of 24 talented dancers and musicians who call themselves the Tennessee Kids and the show would not be the same without them. According to Bustle, the former NSYNC member considers his band to be like brothers and «when they come together they are a force to be reckoned with». That camaraderie was evident as they successfully gave fans a show they won’t forget.

«The design is based off the floodplain maps of the Mississippi River as it runs through Memphis, which is his hometown», said creative producer Nick Whitehouse . «We wanted it to be a really organic, never-before-seen type stage that ran through the entire arena and engaged all the fans so everyone could have a front row seat».

Whitehouse’s concept was effective. Though there were moments when Timberlake’s back faced the crowd, the massive s-shaped stage that sat in the center of the venue allowed for a better fan experience. Rectangular screens dropped from the ceiling in a circle above the stage, magnifying the JT’s face. There were only a few feet between him and the front row, he constantly high-fived fans, creating an excited frenzy with every touch.

The 38-year-old singer-songwriter hit the turntables center stage during the 2006 song, «My Love». When it was time for «Senorita», he jumped on the piano with the Tennessee Kids and fans chanted lyrics like, «It feels like something’s heating up, can I leave with you?»

That’s when Timberlake hyped up the crowd and drew the attention to the man behind the bongos, who went ham on his solo. After he was done, it was the drummers turn to rock out, illustrating further the stage was overflowing with talented artists.

He slowed the beat a little with the 61st Grammy Award nominated song from 2018, «Say Something». Suddenly the spotlight revealed Timberlake gracefully strumming the strings of his guitar, is there anything he can’t do?

According to Forbes, the Man of the Woods Tour has the sixth-highest-grossing tour for 2018, selling nearly $1.5 million dollars in tickets. Fans walked away saying things like, «it was amazing», «this concert was everything» and «dreams do come true» about this night. Many fans are going as far to say he’s like the legendary late Michael Jackson; it’s easy to see why.