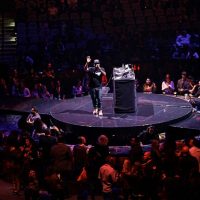 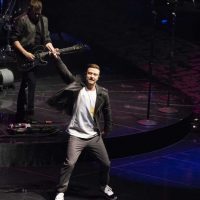 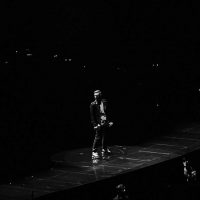 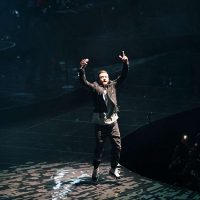 Justin Timberlake basks in the love of 16,000 at AT&T Center

San Antonio Express-News — His latest album is the lightly country-tinged «Man of the Woods», but pop superstar Justin Timberlake is really a man of all the people.

Timberlake’s long-awaited «Man of the Woods» tour arrived at AT&T Center on Saturday.

The tour, built on a sexy, career-spanning set list, as well as newer songs, was one of the top concert draws last year. Some 16,000 were in the house Saturday.

Some factors, however, statistics can’t measure.

On Friday afternoon, Timberlake generated excitement at Methodist Children’s Hospital when he made a surprise visit to several children cancer patients, family members and staff.

The touching low-key moment was captured in photos posted on Twitter and reported on news sites.

Saturday offered the more familiar uptempo side of the award-winning 37-year-old Tennessee-born singer and occasional actor who is more than willing to bring sexy back.

DJ FreeStyle Steve kept the audience engaged before the main attraction, working his dance mixes and microphone on a winding catwalk, complete with faux trees, dead center of the arena.

Backed by sizable 10-piece band The Tennessee Kids and fashionable dancers, Timberlake prowled and worked the futuristic stage after hitting the spotlights and lasers at 9:12 p.m. to deafening screams.

«Put your filthy hands all over me», Timberlake sang on the slinky R&B opening song, «Filthy».

Many in the young audience that’s grown up with him looked ready to take him up on the offer as he showed off some Michael and Janet Jackson-inspired dance moves.

His soulful falsetto was in fine, funky form on the fun and irresistible horn-driven «Midnight Summer Jam».

Timberlake is a nonstop dancing machine and took it to edgy choreographed limits on the hit «SexyBack». And the party was just getting started.

The transition to the lilting country pop of «Man of the Woods» — which would fit in just as nicely floating off the rotating stage at the San Antonio Stock Show & Rodeo next month — was only a brief vacation from the thudding dance beats.

One of the highlights of the night was watching the talented Timberlake simply stand behind and playing a Fender Rhodes electric piano while singing «Señorita». Though, he was barely able to contain his gotta dance exuberance.

That he is a beloved pop figure to this demographic (and beyond) was proven time and again on Saturday with eruptions of loud screams and cheers of approval.

He is one of those rare second-life artists who continues to successfully navigate changing musical tastes, for more than 20 years now. Nostalgia is not part of the equation here.

Timberlake stuck to his recent, hip and well-paced set lists — more than 20 songs, including «Cry Me a River» to «Rock Your Body».

And really, who needs surprises when it feels this good.