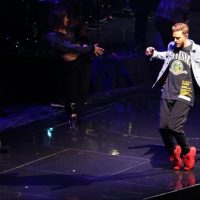 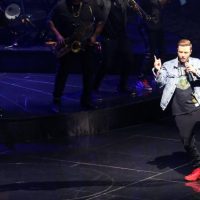 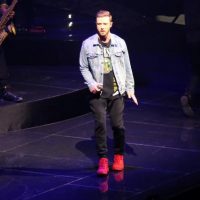 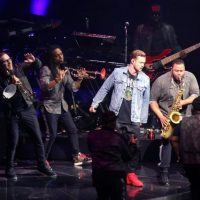 The Herald Sun — More than just a performer, Justin Timberlake seems like the perfect significant other that everybody dreams about.

He’s funny, entertaining in a crowd and he keeps things moving, plus he can dance. And while Timberlake clearly wants his place in The Pantheon of musical importance — both of his opening acts Sunday night in Raleigh referred to him as «The Prince of Pop», a title he can get away with since Prince is no longer with us — he also doesn’t seem to take himself too seriously.

Sunday brought Timberlake’s «Man of the Woods» tour to town for a packed show at PNC Arena, and it was a full-on spectacle.

More of a lavish multimedia dance production than a mere concert, the show took place on an elaborate stage that stretched almost the length of the arena floor. It was curved into a shape reminiscent of Prince’s old glyph symbol, and wintery metallic trees gave it the feel of a Cirque du Soleil set.

It was quite a prop, evoking a river with fog machines (during «Cry Me a River», of course) and a campfire sing-along that happened around a firepit with actual flames.

The show began with a dramatic entrance that looked like the 1977 sci-fi drama «Close Encounters of the Third Kind». Timberlake and band came onstage backlit by bright lights and appearing as silhouettes. It was kind of a tease of an entrance as the stage stayed mostly dark with lasers pulsing overhead during much of the opening song, «Filthy». There wasn’t enough light to really get a good look at the star until the very end of the song.

Timberlake was resplendent in red high-top kicks, which, during the show, he noted were Wolfpack Red. They were a handy visual aid to keep track of his location at any given time. He roamed back and forth during every song, usually surrounded by up to six dancers with a dozen musicians playing back on the primary stage.

Pretty much everything, even a microphone stand, served as a dance prop for Timberlake, whose moves remain sharp at age 37. He sang quite well, showing no apparent ill effects from the bruised vocal cords that postponed some shows earlier in the tour.

But he danced even better, and that’s what turned the crowd on most of all. How he moved was at least as important as how he sang.

Timberlake has a respectable body of solo hits, enough to eclipse his humble beginnings in the late-1990s teen-pop group N’SYNC. Sunday’s set list covered most of the big hits, from 2002’s «Like I Love You» to last year’s Chris Stapleton collaboration «Say Something».

When he stripped everything down to semi-acoustic and strummed a guitar himself on «Drink You Away» and «What Goes Around … Comes Around», it was an impressive display of range.