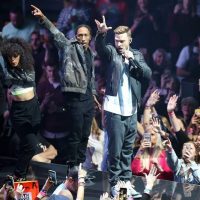 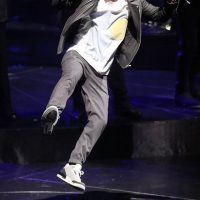 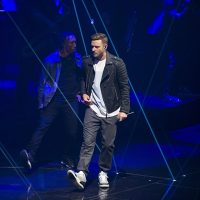 The Memphis native stopped his two-hour set long enough for a man to publicly pop the question to his longtime girlfriend before the Verizon Arena audience of 17,108.

And Timberlake couldn’t resist repeating the soon-to-be-bride’s spunky answer so everyone could hear.

«‘It’s about damn time!'» he mimicked in an exaggerated drawl, adding, «It’s so good to be in the South again». And it was good to have him.

The singer hadn’t graced the arena with his soulful falsetto and facile footwork since 2003 when he, then in his early 20s and on a so-called «hiatus» from boy band ‘NSYNC, toured with Christina Aguilera. Almost 38, Timberlake — backed by his own band, the Tennessee Kids and a half-dozen dancers — is a supremely seasoned solo artist.

Timberlake and troupe made frequent use of the giant fan-flanked, tree-accented catwalk that snaked from the main stage to the back of the arena. The woods vibe would continue with nature projections on overhead panels and even a campfire. Laser lights didn’t add to the theme, but dazzled nevertheless.

Though he had to cancel shows in December due to bruised vocal chords, Timberlake’s upper register sounded strong, even on more demanding songs like «Cry Me a River» «My Love» and «What Goes Around … Comes Around». The hits didn’t stop there. He performed at least shortened versions of every fan favorite from saucy «Senorita» (on which he played keyboard) and sultry «Like I Love You» from his 2002 Justified album, to the rhythmic «LoveStoned» and driving «SexyBack» from his 2006 album FutureSex/LoveSounds. While he did keep his ensembles, all paired with sneakers, casual, he did break out the «Suit & Tie» from The 20/20 Experience album of 2013.

There were entirely too many songs — we lost count at seven — from his latest album Man of the Woods, including the opening number, «Filthy», as well as the title track. But, hey, Timberlake has a wife and kid now and needs to sell that new material.

Opening act, Canadian singer Francesco Yates, 23, possesses a Timberlake-esque look and sound. But his shrieky, self-indulgent 30-minute set, which included an overwrought cover of Prince’s «Diamonds and Pearl» grew tiresome fast. Yates was preceded and followed by DJ Freestyle Steve who pumped up the crowd, playing hits from Beyonce to Bruno Mars.