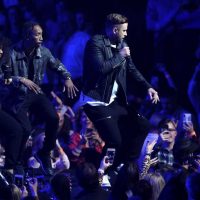 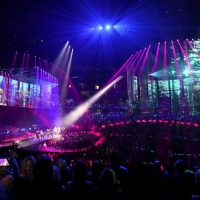 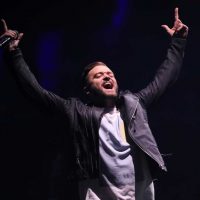 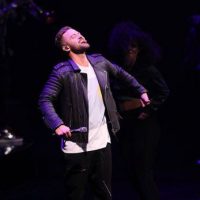 Commercial Appeal — Midway through another sold-out concert in Memphis on Saturday night, Justin Timberlake paused to offer thanks.

«It’s not every day you get to be home, on the weekend, and at the FedExForum with 20,000 of your family and friends».

The Millington-born pop star was back in Memphis for the second local date on his 2018-19 «Man of the Woods» tour. Saturday’s concert was the fourth time Timberlake has headlined FedExForum, following sold-out shows in 2007, 2013 and 2018. Coming just seven months after his last local date, it was an unusually quick return to his beloved «M-Town», as Timberlake repeatedly called it.

Timberlake resumed the «Man of the Woods» tour last week, kicking things off with a string of dates in the South. This came after a handful of concert cancellations late last year, with doctors ordering Timberlake to take a break from the road to rest his bruised vocal cords. The singer showed no lingering effects from the issue, as his voice was in fine shape, as he greeted his fellow Memphians with a bellow to launch the opening song, «Filthy».

2019 concert preview: 2019 Concert Preview: All the big shows from Justin Timberlake to Elton John, and more

Joined by his backing band, The Tennessee Kids, Timberlake’s 21-song, two-hour concert — both its set list and staging — were largely the same as last summer’s stop at FedExForum. The show was built around a brilliantly conceived production design: a futurist main stage, shifting high-tech lights and screens, a catwalk winding through the length of venue, and multiple smaller stages allowing the entire arena to be close to the action.

If anything this version of the MOTW show felt more intimate and streamlined, with a handful of subtle changes in pacing and production allowing Timberlake to get even closer to the fans and take advantage of his charismatic presence.

At various points, Timberlake kibitzed with those in the pit area, shared shots with his band and fans, and led the crowd in singing happy birthday to an 11-year-old girl attending the concert with her mother — and then quickly apologized to the parent for his occasional use of blue language («Sorry about the profanity earlier, mom — that’s my bad», he chuckled).

In between, Timberlake danced, sang and worked his way through a selection of catalog hits, with an emphasis on material from his latest album. Highlights included an opening salvo that featured ecstatic versions of «Midnight Summer Jam» and «SexyBack», and later tour de force performances of «Cry Me a River» and «Mirrors».

Timberlake’s interplay with The Tennessee Kids also added to the evening’s good vibes — as the band went mobile, joining him along the catwalk for several songs, including «Man of the Woods» and «Drink You Away».

While last summer’s show found Timberlake hustling, working hard to pull together all the disparate elements of the concert, Saturday’s gig felt more relaxed and confident. A year of touring seems to have sharpened his performance, freeing him up to luxuriate in the special moments he’s able to create on stage.

Throughout the evening, Timberlake kept returning to the theme of home and Memphis, sounding genuinely appreciative to be back where it all began.

«Here’s to the greatest city in the world», he said. «You might get to see all of the world, but you never forget where you come from».