The Man Of The Woods Tour, Charlotte, NC, EE.UU. +64 imágenes 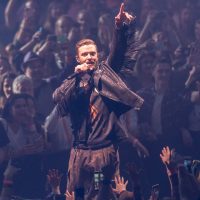 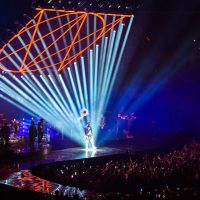 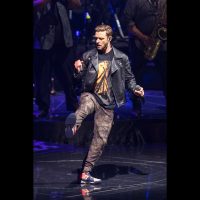 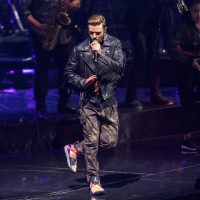 Review: In Charlotte, Justin Timberlake is his usual smooth self — for the most part…

By my count, Justin Timberlake’s stop at Spectrum Center in Charlotte was Show No. 80 on his mega-millions-grossing «Man of the Woods» tour, which has found its way to nearly every corner of North America and Europe since launching nearly 10 months ago.

This would suggest, to me, that at this point the concert should be as well-oiled a touring machine as any currently on the road — every hair atop the headliner’s head in exactly the right place, every note from his 11-piece band and his three backup singers reverberating in optimal pitch, every hip-hop-inspired dance move sharp as the tip of an X-acto.

But while Tuesday night’s headlining set by Timberlake was a big, bold, colorfully laser-lit and creative ride spanning nearly two hours, it wasn’t quite perfect. Here are a random collection of observations about and reflections on the first major Charlotte concert of 2019.

1. He made good use of the expansive space he had to work with. Measuring somewhere in the neighborhood of 150 feet in length, an elaborate catwalk snaked out from the main stage in an S shape, dipping low at first, then rising high in the center; it was flanked at two points by clusters of three fake trees (a nod to the «Woods» of his tour and album titles) and continued on to the opposite end of the arena, with the last section a high-tech extension that lit up and could sprout 18-inch blades of fake grass on command — as it did during «Man of the Woods» and 2007’s «Until the End of Time». He spent more than half of the show rubbing his rhythm and his fantastic footwork in fans’ faces on the catwalk, but I was still surprised how often he stuck to the main stage, since his performance (and the crowd) felt more alive when he was roaming.

2. He could have gotten started earlier. Because the stage setup was so complicated, it needed to be done early and then not messed with; as a result, Toronto singer-songwriter Francesco Yates (who feels like Canada’s answer to Bruno Mars) actually got to do his opening set on the headliner’s finished stage. But once Yates finished, stagehands had virtually nothing to break down or put in place to get ready for Timberlake, so it seemed silly to have to wait another half-hour for him to emerge, especially since it’s not like he was running late to the arena from the airport or something (he’d been in town for at least 24 hours already — he patronized Midwood Smokehouse in Charlotte yesterday afternoon). Timberlake didn’t get going until after 9:20, and it was immediately clear that he was going to have a difficult time squeezing his full set list in before 11. Yet he initially took his time, lengthening already-long tracks with significant dance breaks. An hour in, he made a good cut for time by dropping an oft-included section of the show that sees his backup singers moving to the front for covers, but then seemed to rush through abbreviated versions of fan favorites like «Rock Your Body» and «What Goes Around… Comes Around» as 11 neared. Eighty shows in, his pacing should be much more evened out than that.

3. There’s not much I can say about his dancing that hasn’t already been said, but yes, absolutely: It’s a heck of a lot of fun to watch. Whether J.T. was showing up his backup dancers during a choreographed bit during opening number «Filthy», or doing a smoothed-out partner dance with his it-wobbles-but-it-won’t-fall-down microphone stand during «Suit & Tie», or throwing in two beats of twerking here or a couple beats of the shoot dance there to get some laughs, he was mesmerizing. Perhaps the dance highlight of the night, though, was the one he did with his hands to get «My Love» spinning in the right direction with a mixing machine.

4. Who knew he was so capable with one of those, by the way? Or that he could play the acoustic guitar so well? His strumming on an excellent stripped-down version of «Drink You Away» pushed the track even closer into the gospel-funk realm, and he showed even more restraint in plucking out notes for his reinvention of «What Goes Around… Comes Around», giving it an almost dream-like quality. Oh, and as if that weren’t enough, he played a pretty bueno set of keys on «Señorita»…

5. It’s a shame Timberlake felt obligated to rely so heavily on his «Man of the Woods» album, which doesn’t have the pop (literally or figuratively) of his three previous albums. But amid the eight new songs scattered throughout the setlist were all the essentials his longtime fans could ask for: 11 of his 13 top-10 hits, from «SexyBack» to «Can’t Stop the Feeling!» — with the only two missing being «Not a Bad Thing» (off of 2013’s «The 20/20 Experience — 2 of 2») and «Love Never Felt So Good» (off of Michael Jackson’s posthumous «Xscape» album).

6. Sports-celebrity sightings! I shook hands with seven-time NASCAR champion Jimmie Johnson in the Will Call line before getting my tickets, then spotted Carolina Panthers tight end Greg Olsen posing for pictures with fans one section over from mine before the show. (A Cody Zeller sighting would have rounded things out nicely, but the Charlotte Hornets were busy losing to the Clippers out in Los Angeles Tuesday night.)

7. Meanwhile, the Petey Pablo cameo was cool, but I’m not sure I totally got it. The North Carolina native did a little bit of rapping as he shared the stage with DJ Freestyle Steve between Yates and Timberlake’s sets, then promised the crowd that 2019 was going to be a big year for him. During the headlining set, Timberlake at one point gave a shout-out to Pablo (known for his contribution to Ciara’s 2004 chart-topper «Goodies» and his own hit from the same year, «Freek-a-Leek») by saying «I know we don’t look the same. We’re the same on the inside». But I don’t think the average J.T. fan understands their connection or what makes it so strong, and a Google search won’t shed much light.

Justin Timberlake performs in the shadow of a big fake tree on stage at Spectrum Center.Benjamin Robson

8. «Cry Me a River» felt like a grand finale. As the 10th of the night’s 21 songs started, smoke billowed from fog machines and quickly covered every inch of the long catwalk, and as it ended, a crescendo of guitars and drums and horns turned the song into a rock anthem that had 17,000 fans screaming. It would have been a perfect way to send the crowd home. So, too, would have the next song — «Mirrors», which ended with Timberlake standing alone at center stage surrounded by cheers as he dropped to his knees, bowed to the crowd and pounded on the ground. «Thank you, Charlotte. Thank you. I love you». The friend I was with turned to me, looking puzzled, and asked, «It’s not over, is it?» The actual finale came an hour later, in the form of «Can’t Stop the Feeling!», and left me wishing he’d put that song in the middle and instead ended with «Cry Me a River», or «Mirrors».

Why not «Can’t Stop the Feeling!»? I don’t know, I just would have preferred not to go out on that one. I mean, it took months to get it out of my head. Now it’s back in there, and I’m once again having trouble getting it out.