The Man Of The Woods Tour, University Park, EE.UU. +18 imágenes 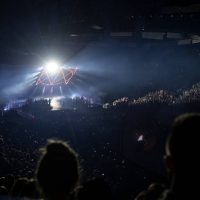 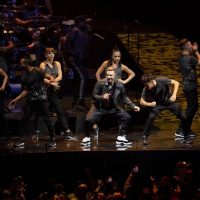 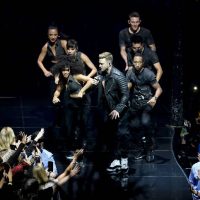 This State College show was the 75th stop on the ‘Man of the Woods Tour’, which began March 13.

Timberlake released his latest album ‘Man of the Woods’ on February 2 to lackluster critical reception, though the record debuted at number one on the Billboard 200.

Tracks on ‘Man of the Woods’ are sonically quite different from Timberlake’s early records.

The album is an apparent return to Timberlake’s childhood roots in Memphis, Tennessee, and sounds more within a contemporary country framework than his previous pop endeavors.

Francesco Yates opened the show with a short set of covers and original songs. The burgeoning artist, dressed in a gold-bedazzled leather jacket, tight leather pants, and white Nike Air Force Ones demonstrated his impressive upper range. Highlights of the set included a cover of «Suga Suga» by Baby Bash and the original tune «Call».

DJ Freestyle Steve kept the crowd excited with a selection of chart-topping hits from throughout the decade.

The stage was a massive, serpentine structure that wound through the floor crowd, with a circular bar in the middle for VIP patrons. Transparent screens hung above the stage, occasionally showing imagery of the woods, and beaming purple, red and blue lasers probed the stadium during the set’s more energetic moments.

«I was amazed at all the effects they had», Andrea Castaneda said. «It was probably the best show I’ve ever been to», Castaneda (freshman-mechanical engineering) said.

In line with the theme, fake trees dotted the walkway and thickets of wheat occasionally popped up for select ‘Man of the Woods’ songs.

At 9:03 p.m., Timberlake and the Tennessee Kids emerged from a smoke-lit ramp at the front of the stage to perform «Filthy».

The synth-heavy track had a perplexing effect on the crowd, who clearly wasn’t too familiar with Timberlake’s most recent endeavors. Nevertheless, concertgoers were clearly excited to see the pop icon, and the energy throughout the stadium was notably jovial.

«The concert as a whole was awesome and super energetic, but I didn’t know a ton of songs off his new album», Katie Garvey (senior-supply chain) said.

The first major medley of the show began with «LoveStoned / I Think She Knows Interlude» before morphing into mega-hit «SexyBack». The tracks, both from Timberlake’s ‘FutureSex / LoveSounds’ album, brought an infectious air of nostalgia to the venue.

It was clear that the majority of this crowd was here for Timberlake’s earlier, and far more successful, hits from the early 2000’s.

After finishing the medley, Timberlake addressed the stadium for the first time.

«Is Penn State lit?» he asked.

Timberlake then launched into a second medley of «Man of the Woods» and «Senorita».

The Tennessee Kids did an impressive job of backing Timberlake and changed the basic instrumentation of certain tracks in novel ways.

«Not only Justin, but the performers definitely made it better», Katie Byrd (freshman-information sciences and technology) said.

A beat-pad setup rose from the middle of the stage, and Timberlake then played a chopped-up intro consisting of his vocals from «Cry Me a River», before actually singing the song.

He then offered a toast to the crowd, and took a shot with his band before performing «Drink You Away».

The show then took a notable reprieve from the bass-heavy first half, as Timberlake and the ensemble moved to the far portion of the stage to gather around a faux-campfire.

With an acoustic guitar in hand, he sang the opening few verses of «Until the End of Time».

In an odd, yet endearing move for a pop star, Timberlake ceded the microphone to grant each of his background singers a chance to sing various songs, including Fleetwood Mac’s «The Chain», Lauryn Hill’s «Tell Him», The Beatles’ «Come Together» and John Denver’s «Thank God I’m a Country Boy».

«I thought the campfire thing was cute», Alexis Palucki (freshman-division of undergraduate studies) said. «The background singers were so good».

The final medley had the entire crowd on their feet with a mix of «Summer Love», «Dance with Me», «Supplies» and «Like I Love You».

Finally, Timberlake closed the show with «Can’t Stop the Feeling», to a massive standing ovation.

‘I hope you came to dance tonight’, Timberlake implores, and then delivers

Centre Daily — This Monday was drearier than most, so the music enthusiasts of State College needed any excuse to rock their bodies. Luckily, Justin Timberlake obliged.

As part of his global The Man of the Woods Tour, Timberlake performed at the Bryce Jordan Center. His pit stop at University Park marked the latest leg of a tour that began in Toronto and is slated to end in Denver. The tour is meant to celebrate the release of Timberlake’s latest album of the same name, and serves as an interactive departure from the usual concert format.

With an ear attuned to the dramatic, Timberlake preluded his entrance with fog and bass-laden ambiance. One by one, individual dancers and musicians in Timberlake’s entourage emerged from a stage door, before Justin Timberlake himself jumped into the fray.

What followed next was a two-hour display of choreography, vocal flourishes, and strobe lights. All this, wrapped either as a trip down memory lane judging by the set list, or a trip into the woods by the special effects.

Along with the main stage, which housed an assortment of percussive instruments and keyboards, a walkway for Justin jutted out of this centerpiece and coiled around the BJC’s main floor. In order to match the album’s woodsy aesthetic, barren trees peppered the walkway. Fans with extra dollars were able to crowd around the stage and its extensions, and the true select of the audience even drank at a bar in the middle of the catwalk and action.

Francesco Yates warmed up the audience before Timberlake’s entrance, though the combination of liquor and fandom made this task relatively easy. Even before Yates, however, there was a palpable excitement in the air, even if the air itself grew damp and grey.

As storm clouds brewed overhead, many of Timberlake’s local fans braced for gusts of rain-soaked winds. Still, the fans waited, protected from the elements by parkas and umbrellas. Sheri and Patrick Weimer attended the event as a way to spice up date night, though half of the married couple considers herself a bigger fan than the other.

«I’m here to knock something off my bucket list», Sheri Weimer said. She first became exposed to Timberlake through her daughters’ obsession with NSYNC. Eventually, the fever spread to the maternal side and hasn’t subsided yet. Pleased with Timberlake’s newest album, Mrs. Weimer was just ecstatic to finally see him in person, even if only from a distance.

As for her husband, Mr. Weimer was just doing his spousal duties. «I’m just here to make my wife happy», he said.

Alycia Fournier spoke of Timberlake as if the performer was an ancient heirloom or relative. «I feel like Justin has always been here», Fournier said, adding that she’s always known one of his songs.

Both Fournier and her friend, Emma Holland, cited SexyBack as their favorite Timberlake standard. Taking time off from their studies, the two ventured out to the BJC as long-time Timberlake fanatics. Holland, however, got a recommendation to see the concert from the most unlikely of sources: her father.

«He viewed a past performance on-demand, and told me, ‘I would be blown away'», Holland said. She hoped her father’s praise will hold true.

Cassie Ayers said she’s been a fan since the age of eight; Melissa Torres said for the past 22 years. No matter the chronology, both friends exclaimed they were «huge fans» of Timberlake and his past work, especially the singer’s NSYNC days.

«This has been one of my dream experiences», Ayers said. «And to finally see him in the flesh is amazing». Torres expressed just as much glee at the opportunity, though she flavored her excitement with a dose of sarcasm. «I would’ve preferred if the rest of NSYNC were here, but we’ll survive», she said.

Before his final selection, Timberlake lamented how he never went to college and thus «missed the college experience». To make up for this, Timberlake and the Tennessee Kids took shots of tequila on stage.

«Now we’ve all been drinking», Timberlake said to the audience. Then he picked up an acoustic guitar, and played the audience out.