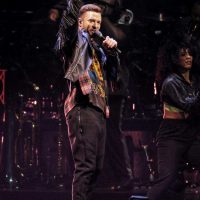 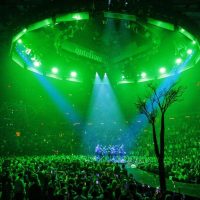 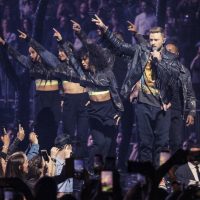 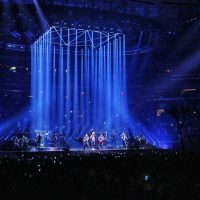 Justin Timberlake Knows How To Put On A Fu**ing Show: Recap

Vibe — The arena went dark and the crowd roared. A light peaked through from behind the stage with smoke acting as a thin veil. Band members then ascended the stage instruments in hand digesting the energy from the anxious crowd ready to see the main act. And as the beat continued to build Justin Timberlake appeared.

Donning a black leather fringe jacket, a Biggie T-shirt and red-plaid button up, Mr. Timberlake opened his sold-out Madison Square Garden show with «Filthy», the lead single from his latest album (and fourth number one) Man of The Woods.

The nearly two-hour concert wasn’t a show in which his band, the rambunctious and wildly talented Tennessee Kids or his half a dozen dancers did all the work. Silas’ daddy, a showman who’s earned his stripes since his Star Search days, effortlessly sang each song, played several instruments and dougied in a pair of brown Tinker Hatfield Jordan 3s three months shy of his 38th birthday.

Man of The Woods may have earned mixed, and even lackluster reviews, but Justin Timberlake gave the crowd a healthy mix of what they wanted while still promoting his 16-track record. «Midnight Summer Jam» «Montana» and the album’s title track received new life inside MSG while performing hits like Justified’s «Cry Me A River», Future Sex Love Sound’s, «LoveStoned/I Think She Knows» and an acoustic version of «What Goes Around Comes Around».

Yet the true might of Timberlake’s musicality and showmanship came during his performance of «Mirrors». The mid-tempo love song of seeing one reflected in another has always been a come together moment for Timberlake, but it was during the performance where Justin Timberlake connected most intimately with fans. Whether single, dating, engaged, married or divorced, «Mirrors» when played in your headphones makes you believe. «Mirrors» when you see it performed live gives you air and hope.

For about 20 years Justin Timberlake has done his job. He’s sang great songs and performed them to the best of his ability and Monday night at Madison Square Garden, he, like always, did what he’s paid to do: he put on a show and for just two hours whatever woes we had were gone because Mr. Timberlake and The Tennessee Kids made it so.