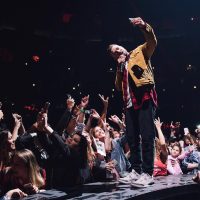 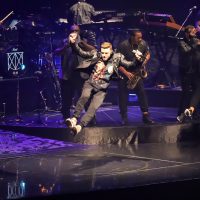 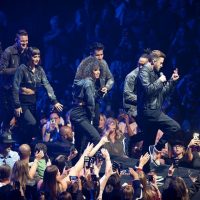 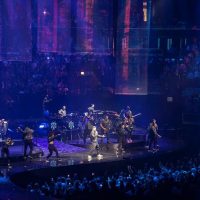 NWI Times — Justin Timberlake’s recent concert in Chicago was his third Windy City show this year and the singer packed fans into the United Center once again.

Timberlake’s last Chicago appearance was in March when he performed two sold-out shows for enthusiastic fans.

The concert was a joyous dance party with Timberlake and his company of dancers and musicians leading the exuberant musical shindig as fans stood up for the duration of the show.

Part of the concert’s stage design included a long walkway that extended from the main stage at one end of the arena and traveled to another smaller stage situated on the other side of the stadium. Fans who purchased VIP tickets for the show were able to stand on either side of the extended walkway for a closer look at the singer. Bars were also situated on both sides of the walkway allowing audience members to order drinks throughout the show.

Songs performed during the show were a mix of tunes from «The Man in the Woods» and other Timberlake favorites from albums «The 20/20 Experience» Albums 1 and 2, «FutureSex/LoveSounds» and «Justified».

The singer’s concert, which started at 9 p.m. and ended at 11 p.m., opened with the hit «Filty», from «The Man of the Woods», and proceeded with tunes «LoveStoned», «SexyBack», and «Senorita» early on in the show.

Fans were able to watch video screens, which were placed in three sections of the arena. The screens featured close-ups of the concert performances as well as video footage of nature scenes and more.

During one segment of the show, Timberlake and his band The Tennessee Kids, his dancers and backup singers, sat in front of a fire on one side of the stage and performed various tunes.

Among songs on the set list were a slickly choreographed «Suit & Tie», «Cry Me A River», «Mirrors», «What Goes Around Comes Around», «Summer Love», «Rock Your Body» and others.

Timberlake’s current tour is one of his best and he proved once again in his return to the city that he can still attract a crowd with his non-stop energy, charisma and strong vocals.

Visit justintimberlake.com or livenation.com for more concert information. Timberlake recently announced the upcoming release of his new book «Hindsight & All The Things I Can’t See in Front of Me». The book, written by Sandra Bark and Timberlake, was designed by Michael Bierut. The book will be released Oct. 30.