The Man Of The Woods Tour, Albany, EE.UU. +7 imágenes 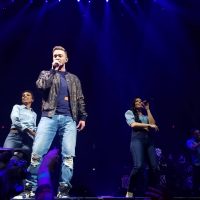 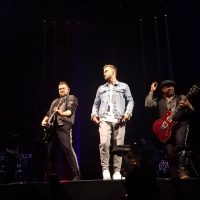 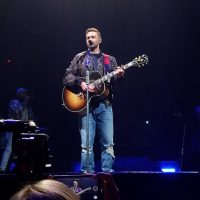 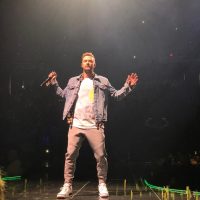 Timberlake phones in much of TU Center performance

Time’s Union — His Super Bowl performance was tepidly received and his latest album, «Man of the Woods», was critically panned. But while he’s faced critical resistance for the first time in a long time, his commercial success continues unabated. «Man of the Woods» has sold well and its ensuing tour is one of the top grossing of 2018.

On Saturday night, Timberlake brought his «Man of the Woods» show to the Times Union Center where he ran through half of that album, plus nearly two dozen more hits and covers in front of an effusive, close-to-sold out crowd. It was a show big on spectacle and production values and ultimately an entertaining experience, but at multiple points it felt like Justin Timberlake opted to coast through his performance.

Timberlake opened his set with «Filthy», the lead single from «Man of the Woods», and it landed with a thud. The song’s odd, slow pace and arrhythmic melody, combined with somewhat flat lead vocals from Timberlake, made for a jarring start to an arena pop show. After following up with the «Off the Wall»-lite funk-pop of «Midnight Summer Jam», Timberlake and his 15-piece ensemble the Tennessee Kids popped off a solid version of «LoveStoned».

Next came «SexyBack», the most underwhelming song of the evening. Timberlake was content to let the audience sing the bulk of the tune, while he wandered across a stage that cut a swath across the entire arena floor, occasionally stopping to do a single choreographed move with his dancers or sing a line or two.

«Suit and Tie» was mostly a series of what looked like slow-mo synchronized dance steps, Timberlake dancing alongside an LED-lit microphone stand anchored on a pivot so it could sway without him really having to touch it. On «Cry Me a River», Timberlake was again content to let the audience do the heavy lifting vocally while he strolled around and occasionally twirled or did a move like the shoot.

Shortly after that tune, Timberlake stood in the center of the arena for a strong version of «Mirrors». The «Man of the Woods» motif was used a couple songs later. Situated at the farthest end of the stage (just in front of the exits onto Pearl Street), a makeshift campfire and benches were set up. Timberlake played the acoustic and introduced all his back-up singers, who then sang pieces of material by Fleetwood Mac, the Beatles, Lauryn Hill and John Denver.

Timberlake put forth a lot more effort once this portion of the show concluded«.Morning Light» and «Say Something» were gems. He sang hard on both and buoyed by strong vocal support from the Tennessee Kids, both tunes soared.

During «Montana», Timberlake crooned and walked along the stage, grabbing cell phones from fans in the front row to snap some selfies. For «Rock Your Body», Justin Timberlake and his dancers left the stage to bust a move on a light-up dance pad on the arena floor.

The set ended with «Can’t Stop the Feeling». It was a sea of bodies, half the band on one end of the arena and the rest on the opposite. Timberlake stood in the center with his dancers, moving a little but mostly just encouraging everyone else to «Dance, dance, dance». It made for a fun end to his performance.

If you’ve ever asked yourself how many better artists a lesser one can poorly imitate in 30 minutes, Timberlake’s guest performer Francesco Yates can provide the answer. I counted five: the Weeknd, Michael Jackson, Bruno Mars on a particularly lame cover of «Finesse», Prince and Morris Day. Yates’ voice was weak, dance moves pedestrian and his original material guilelessly derivative. And his Twitter/Instagram handle, which was on the backdrop behind him, had his name spelled wrong. That’s just amateurish.

As he strolled down the serpentine-shaped catwalk that wound from one side of the arena to the other — connecting stages at each end — Timberlake was trailed by a six-piece troupe of spirited dancers whose intense gyrations and well-choreographed moves brought much of the oomph to the night.

Timberlake himself can seem a bit low-energy at times, but he knows how to surround himself with talented performers. His ensemble of dancers, backup singers and musicians is bolstered by a horn section and stellar guitarist Mike Scott, who used to play in Prince’s New Power Generation. Known as the Tennessee Kids, the group always brings a great deal of the verve.

With all that firepower behind him, Timberlake can get away with shaking a relatively minor bit of booty. When he turned around and shook his rump after «LoveStoned», the crowd roared. Female fans especially were out in force, some wearing «Woman of the Woods» t-shirts, a play on JT’s current tour and album, «Man of the Woods».

He’s also got a large staple of dance hits to draw from by now. But «SexyBack», one of his best dancefloor bombs, fell flat, with Timberlake leaving most of the lyrics to the audience, who couldn’t carry enough volume to propel the tune. Timberlake’s other big collaboration with hip-hop producer Timbaland, «My Love», was better, with Justin Timberlake plunking a synth machine to kick off the rock-techno ballad’s opening lines and staccato beat.

Timberlake and his three male dancers donned blazers for «Suit and Tie», kicked off with explosive percussion from his two drummers, before lasers shot down from a circular rig in the center of the arena to enclose the singer in a hexagonal prison.

In keeping with the occasional rustic «Man of the Woods» theme, bare trees that sprouted from one end of the stage were lit up purple for «Cry Me A River», Timberlake’s Britney Spears inspired ballad that remains one of his best tunes. «Mirrors» was another highlight, as a giant circular screen descended from the ceiling and enveloped the singer with multiple reflections of himself.

Wearing woodsy clothes from his «Fresh Leaves» collaboration with Levi’s, Timberlake remerged for an acoustic interlude designed to look like a campfire singalong. The fire-pit fest included «Until the End of Time» and guest turns from Timberland’s backup vocalists on snippets of covers, including «Dreams» (Fleetwood Mac), «Ex-Factor» (Lauryn Hill), «Come Together» («The Beatles»), and «Thank God I’m a Country Boy» (John Denver).

The final portion of the set found Timberlake working the catwalk again with dancers and his plugged-in band on a closing blast that included «Say Something», «Summer Love», «Rock Your Body» and «Can’t Stop the Feeling».

Opener Francesco Yates from Toronto had a big hit several years ago when «Sugar» by German DJ Robin Schulz featured his vocals (although the song was just a total redo of a previous song, Baby Bash’s «Suga Suga»). Despite that recent success, his set seemed surprisingly amateurish. Yates just tried too hard for pop-star swagger — from the forced dance moves to the strained falsetto and the over-indebtedness to Prince and Michael Jackson.

NBC — Justin Timberlake stopped his concert to perform a gender reveal for a pregnant fan.

Maddie Putrino, 31, said she won free tickets to see Timberlake in Albany, New York, and hoped to get a gender reveal selfie with him but the star went above and beyond.

«I thought why not try to get a picture with Justin holding up my sign that says «it’s a girl» once I caught his attention», Putrino told InsideEdition.com. «I completely didn’t think he would stop the entire show to announce to the whole audience my gender reveal».

But, that’s exactly what the star did at his concert last week.

In a video captured of the moment, Timberlake opens the sign and announces the gender as the audience cheers.

«I was shocked, it was very sweet of him!» Putrino said.

Putrino said she is trying to convince her husband to give the baby the middle name Justine, after the star, but she’s not sure it will pan out.

Putrino said either way, the gender reveal is a story she will definitely tell her daughter one day.