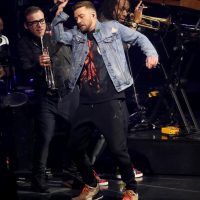 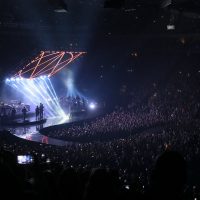 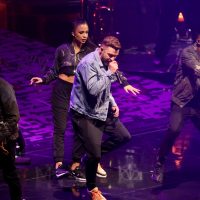 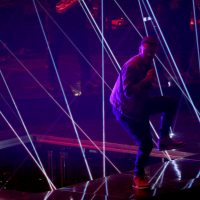 Justin Timberlake is more dance than song man at Xcel

Remember his halftime show at the Super Bowl in February? He crammed 10 songs into a hyperkinetic 13 minutes in an ambitious, dizzying production with a cast of hundreds. He traversed ramps, runways, stairways, stages and the field itself, finally romping up an aisle in U.S. Bank Stadium.

Timberlake, 37, returned to the Twin Cities on Friday with another super-ambitious production at Xcel Energy Center in St. Paul. With a cast of 11 musicians, four singers and six dancers, he delivered more than two dozen songs in two hours that seemed both super-busy and overlong.

Super busy because Timberlake and his dancers — and musicians — were all over the arena, parading along a long trail through the woods. After all, this was the Man of the Woods Tour, complete with faux trees, fake grass and a gas campfire. Perhaps in an attempt to replicate the nonstop movements of his Super Bowl show or maybe just in trying to reach out to all 17,000 people in the arena, Justin Timberlake had three separate stages — a main stage, one in the middle and a large satellite one at the far end of the arena. The sprawling trail connected them.

What might have made the show seem overlong was Timberlake’s propensity to elongate tunes that didn’t demand it and his insistence on playing many — too many for some people — songs from his new solo album, «Man of the Woods», the slowest-selling project in his 16-year solo career since his boy band, N’ Sync, went on hiatus.

Not only are the «Woods» songs largely unfamiliar, but some are lackluster, such as «Montana» (which sounded like a failed marriage of Michael Jackson and the Bee Gees), «Man of the Woods» (a country-soul stroll that went nowhere) and «Supplies» (a turgid, dense funk that prompted fans to stop dancing).

Occasionally Timberlake stepped out of the wilderness, such as for «Rock Your Body», one of his early solo hits, staged on a colorfully lit disco floor. Good luck finding one of those in a state park.

Although that fun workout was an outlier from the woodsy theme, the notion made sense. Because this show was essentially about Timberlake the dancer. He was a dancing fool, lockin’ and poppin’ like Michael Jackson, doing smooth steps like Fred Astaire and executing athletic ensemble moves like a boy-band. Even on the closing euphoric «Can’t Stop the Feeling», he did a perfect impression of a clumsy, rhythm-impaired dude dancing with heart, soul and passion. Yet all this crowd-pleasing dancing may have come at the expense of his singing. On most of his major hits, including «SexyBack» and «Mirrors», he let his excellent backup singers — and the fans — carry the choruses. Nevertheless, it was obvious that this well-rounded superstar can sing and dance at the same time.

There were some stand-out vocal turns, including the big dramatic ballad «Cry Me a River» with his knockout falsetto, and the acoustic gospel-soul «Drink You Away», which was preceded by shots of booze for Timberlake and his Tennessee Kids ensemble, which included Minneapolis guitarist Mike Scott. With those drinks, Timberlake toasted «the greatest musician of all time. You may have seen me [at the Super Bowl] tributing my idol. One time for the Purple One. He’s royalty».

During his show, Timberlake ad-libbed a line from Prince’s «Raspberry Beret» as well as the chorus from «I Would Die 4 U», the Purple piece he played at the Super Bowl. However, this show was much more satisfying than that too-busy mess.

Justin Timberlake gets lost in his big, loud spectacle of a dance party at the X

Twin Cities — For proof that Justin Timberlake gets whatever he wants, one only needed to look at his stage Friday at Xcel Energy Center, his first of two nights at the St. Paul hockey arena.

It began with a performance area on one end of the floor that held his 15-piece band, the Tennessee Kids. From there, a catwalk snaked through the crowd, with a second stage in the center of the arena, surrounded by a VIP section complete with its own bar. It continued to the other side of the floor where, late in the show, a mock campfire (with actual flames) appeared for a quick acoustic set that Timberlake opened with «Until the End of Time». He then ceded the microphone to his backup singers, who crooned Fleetwood Mac’s «Dreams», Lauryn Hill’s «Ex-Factor», the Beatles’ «Come Together» and John Denver’s «Thank God I’m a Country Boy».

The two-hour performance opened with a dazzling laser show, while massive, translucent screens intermittently lowered from the rigging throughout the evening. The stage’s sheer size and number of moving parts was easily the most impressive part of the show.

For more proof that Justin Timberlake gets whatever he wants, one only needs to listen to the album that launched the tour, «Man of the Woods» (although I wouldn’t recommend it). It’s an overlong, overstuffed mess that bounces between aimless funk and pop and cringeworthy attempts at country music. «Flannel», «Montana» and «Livin’ Off the Land» are among the song titles. Everything about it screams unchecked excess.

And, ultimately, that’s what Friday’s concert felt like as well. As awe-inspiring as the stage was, it also often served to obscure JT, who did himself no favors by choosing to perform under so much dim lighting. The screens only occasionally showed the main attraction, and when they did, his image was often obscured by graphics or distorted.

Timberlake’s previous two tours also suffered from the same problem. Given that Justin Timberlake has always pushed himself as a natural Michael Jackson/Prince/Bruno Mars-style entertainer who can sing and dance and astound, it’s mind-boggling that he doesn’t make it easier to actually see him doing it.

That said, the crowd of more than 17,000 didn’t seem to mind and instead whooped it up to what turned out to be a fast-paced, high-energy show that aired about half of the new album alongside Timberlake’s many hits, including «SexyBack», «Senorita», «Suit and Tie», «My Love», «Cry Me a River», «Rock Your Body» and his most recent major smash, 2016’s «Can’t Stop the Feeling».

The poor sound mix — with JT’s vocals often overpowered by the booming rhythm section — actually helped give the concert more of a nightclub feel, where individual songs tend to blur behind the beat, the flashing lights and the booze.

Timberlake did slow things down a few times, including the aforementioned campfire set and «Say Something», easily the best song from «Man in the Woods». (Country star Chris Stapleton co-wrote and sang on it. I hope he got a big paycheck for it, too.)

But in the end, it all felt like an empty spectacle, the backdrop for a big party that’ll leave a hangover in the morning.

Justin Timberlake Brings Us Into The Woods

Music Minnesota — My earliest memory of music came in 1998. My sister and I watched rising boy band Nsync perform on the Disney channel; the performance that brought them to stardom. From that day forward, I was hooked on Justin Timberlake.

I believe Justin Timberlake is the modern king of pop. You haven’t seen anything until you have seen Justin Timberlake destroy the stage. Say what you will about his most recent album, Man of the Woods, but this man knows how to perform.

Timberlake is no stranger to Minnesota. His halftime show performance was iconic in its own right. On his first night of a two night run at the Xcel, Timberlake pulled out all the stops and brought a Super Bowl level performance and then some.

The goal of the this tour was to bring the outside in. Timberlake and his band achieved this through building a completely immersive stage experience. From the runway stages to the incredible lighting with drop down screens, this in the round experience made every seat the best in the house.

Timberlake is a machine as he hardly broke a sweat throughout his nearly 2 hour set. Effortlessly mixing songs from different eras in his career, Timberlake presented a cohesive performance with flawless transitions. There was never a dull moment in this show as every song Justin Timberlake performed was a hit.

His backing band and contemporary dancers were equally on point as they kept the crowd on their feet. Justin Timberlake played double duty as singer and dancer, showing off his classic boy band moves to the audience of mostly 30 year olds who fell in love with him as a teenager.

There were so many highlights of the night. My personal favorite chunk of the show was when Justin Timberlake played Cry Me a River and Mirrors back to back. It should be illegal to play so many hit songs in succession because I was absolutely destroyed.

Another high was when the crew got a quick break and sang around a literal campfire; it was very intimate and allowed for the back up singers to get solos.

Opening for Timberlake tonight was Francesco Yates, a Canadian singer who reminded of a young Timberlake. Alongside him was the generically named DJ Free Style Steve who, if given enough time, could’ve easily made the wait for Timberlake unbearable.

JT was my first love in music. Growing up, my sister exposed me to Nsync and would later neglect to take me to their 2001 show. She has since made it up to me over the years as this was our second time seeing the king together. Justin proves time and time again why he is the best there is.

Timberlake emerges from «The Woods», lands in St. Paul

MSU Reporter — Seven months after he began his Man of the Woods tour, Justin Timberlake continued to thrill fans and instill booty-shaking with well-planned choreography at Xcel Energy Center on Sept. 28.

Timberlake began the set with «Filthy», a provocative track with undertones of alluring metaphors reminding us to handle our meat with care while preparing it in the kitchen.

The next three songs of Timberlake’s set then seemed to blend into one another as he extended his choruses and lost himself among his well-trained team of dancers.

However, fans remained under a trance racing back and forth between the bar center stage and Timberlake himself as his distorted image fell upon a screen; reminiscent of the psychedelic images of the long-lost sixties.

Despite the dancing and astounding visual effects, the true magic of Timberlake’s show is his versatility and ability to be an entertainer, bartender and a plaid-cladded friend singing to you around the campfire.

Truly a dazzling show, however I left St. Paul feeling somewhat disappointed. Timberlake’s show is ambitious, energetic, massive and well-planned, but this takes away from the lyrics and musicality of his songs.

In all, the Man of the Woods at Xcel Energy was the equivalent to Michael Bay’s films; interesting to watch, but lacking in depth.