The Man Of The Woods Tour, Lexington, KY, EE.UU. +30 imágenes 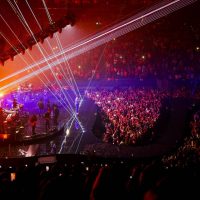 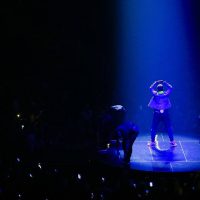 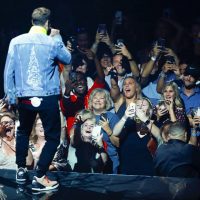 Justin Timberlake brings a visual stunner to Rupp. Singing and sound are another story.

Lex Go — A certain irony revealed itself last night at Rupp Arena, triggered by the fact Justin Timberlake named his current tour after his recent «Man of the Woods» album.

After all, the title conjures all sorts of naturalistic images, many of which became artfully visible through the use of multiple see-through video screens that rolled up and down during the two-hour concert, making these living postcards seem more like dancing holograms.But that came later in the set.

When Timberlake and his 20-plus member posse of singers, dancers and band members entered amid a light show that would have made Pink Floyd envious, the feel was almost space age. Then, when the pop celebrity took to dancing amid showers of lasers for the show-opening «Filthy», the concept of a man of the woods didn’t just seem foreign. It seemed non-existent.

Timberlake would, in time, slow the show down to a modestly more relaxed pace that played more to his tour and album’s stated theme — as in an acoustic sit down set around a makeshift campfire that meshed amiable hits like «Until the End of Time» with covers of tunes by Fleetwood Mac, Lauryn Hill and even John Denver that were assigned to his backup singers.

All of this woodsy congeniality was essentially a diversion from a program that began like shot from a cannon with a dance-pop party drive that didn’t even remotely dissipate until Timberlake formally greeted the crowd of 18,000 nearly an hour into the show.

From a visual standpoint, the concert was a stunner that played out on a series of three stages utilizing the entire arena floor to create an in-the-round feel. But audience members were also planted in and around the ‘S’ formation of the stages, including one near the middle of the floor that included, no joke, its own bar.Through that, Timberlake and his entourage moved and grooved through the beat-heavy bravado of «SexyBack», the Marvin Gaye-ish pop-soul of «Suit and Tie» and the blasting synth-savvy orchestration of «Cry Me a River». What unraveled was a masterful pop display with a visual aptitude that proved fashionable and functional for Timberlake’s tireless workouts.

Go beyond that, however, and things were a little problematic.

For all of his physicality and good-natured exuberance, Timberlake never really caught fire as a vocalist last night. His appealing high tenor vocals were noticeably thin and, ultimately, little match for the musical weight of such a massive band. There were a few intriguing moments, like the acoustic revelry summoned during «Drink You Away» (a song he famously performed with Kentuckian and October Rupp visitor Chris Stapleton on the 2015 CMA Awards) and the very focused and organically anthemic delivery of «Say Something» (a duet with Stapleton on record that is far and away the best of the «Man of the Woods» tunes).

But for a sizable portion of the show, Timberlake relegated himself to chief cheerleader and dance captain by letting his backup singers — and, at times, even the audience — tackle much of the heavy vocal lifting.

The other difficulty was the sound. This was one of the weakest, muddiest sound mixes for a major Rupp concert in recent memory with bass drowning out much the brass and percussive finesse of Timberlake’s band — a surprise indeed, given how sharp the visual presentation of the performance was. Such was life last night for pop music’s man of the woods — a performance star with energy to burn and audience-friendly charm by the truckload, but also with a surprising hesitancy of letting loose on the dance floor, or the pseudo-great outdoors, with a commanding howl.

Justin Timberlake brings «Man of the Woods» tour to Rupp

Kernel — Last night, Justin Timberlake, one of the most famous male pop singers and entertainers of the 21st century, performed in Lexington. Timberlake and his band, The Tennessee Kids, put on an incredible show that left the audience cheering for more.

The «Man of the Woods» world-tour just returned to North America from Europe, and Lexington was the first stop since they came home.

The stage spread all across the floor of Rupp Arena, and took the form of an «S» shape. There were faux trees and grass aligning the stage, and a bar in the middle of the stage for those who had VIP access. In addition to this, the main stage rotated so that all 18,000 attendees could feel the hype and be involved with the concert.

Timberlake started the concert with one of his more upbeat songs on his new album «Man of the Woods» titled «Filthy». It got the audience engaged immediately. He had six backup dancers, and their «N-Sync» dancing got everyone on their feet; not one person was in their seat.

«The concert was incomparable to anyone I have ever been to. From Bruno Mars to Mumford and Sons, Justin Timberlake has definitely topped the list for me», UK sophomore Peyton Miller said. «It felt like no matter where you were sitting in Rupp Arena you were having a good time».

The stage and lighting were entertaining, but after a few songs, Timberlake wowed the audience once again. From the rafters of the arena came down about 35 clear, holographic sheets that displayed scenery, visual effects, and live video of the concert.

In the middle of the concert, Timberlake paused in awe of the crowd. He said, «So is this how they do it in Wildcat Country?»; Rupp arena roared after he made that statement.

Timberlake fulfilled many dreams and had the audience nostalgic by not only playing songs from his latest album, but by playing most of his classics like «SexyBack», «Mirrors», «Suit and Tie», «Cry Me a River», «Summer Love», «My Love» and «What Goes Around… Comes Around», among many others.

«I’ve been a fan of Justin Timberlake since the early 90s, following his movies and his music. I’ve been to 4 of his concerts, including his Super Bowl Half-Time performance, and this concert was great», an attendee said.

Towards the end of the concert, Timberlake lead a toast to the crowd saying, «Here’s a toast to southern hospitality!» He then had an acoustic set and sang «Drink You Away» and had the crowd singing right along with him.

«Last night was truly one of the best performances I have ever seen», UK sophomore Kate Grattan said. «Justin was not only so talented but captivated the audience 100% of the time. One of the best nights of my life».

Then there was a campfire scene where Timberlake along with his backup singers, sang covers of the famous songs, «Dreams» by Fleetwood Mac, «Ex-Factor» by Lauren Hill, «Come Together» by The Beatles, and «Thank God I’m a Country Boy» by John Denver. It was special to hear each of the backup singers’ true voices stand alone.

«I think my favorite part was when his band and singers all sat around a campfire and just jammed out… it seriously gave me chills», UK sophomore Regan Martin said.

The «Man of the Woods» Tour was full of nostalgic hits, new music and happy energy.

The last words Rupp heard from Timberlake before leaving the stage were, «Lexington, I love you! Goodnight».