The Man Of The Woods Tour, Pittsburgh, PA, EE.UU. +10 imágenes 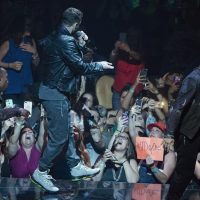 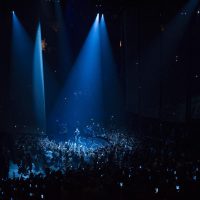 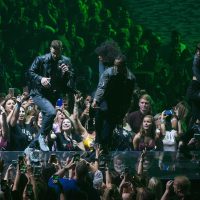 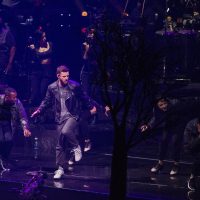 Those fleet feet of his, which always land softly, were given a strenuous workout Friday at PPG Paints Arena with a meticulously choreographed, action-packed, crowd-pleasing show.

Timberlake, 37, seldom wasted a step, joined by six dancers and his multigenre band, the Tennessee Kids, who were packing horns and double drums that got zesty on «Senorita». Seamlessly blending pop, rock, soul and R&B, they zipped through Timberlake’s bevy of solo hits in front of a full-sized, in-the-round audience, including six or seven Pittsburgh Steelers in the VIP floor area. (Where did you think the Steelers would be, at the Dave Matthews show in Burgettstown?)

Timberlake knew how to play the hometown crowd, mashing up Pittsburgh rapper Wiz Khalifa’s «We Dem Boyz» and «Black and Yellow» with his own «My Love» as he played a contraption that let him be a push-button DJ.

Laser lights danced across three stages connected by a snaking runway. At one point, a circle of colorfully lit beams surrounded Timberlake, shrinking in on him then growing bigger in time with his dance steps.

OK, let’s get to the constructive criticism.

The pacing wasn’t perfect, as the final third of the show felt rushed following a well-meaning but momentum-slowing «campfire» sequence on an auxiliary stage, where the seated backup singers took turns performing Fleetwood Mac, Lauryn Hill, Beatles and John Denver tunes (if only Kenny Chesney, in town a day early, had turned up to chime in on «Thank God I’m a Country Boy», like a few years ago when he made a surprise visit on Billy Joel’s PNC Park stage.)

And that «man of the woods» vibe Timberlake has been pushing still feels forced, despite the faux trees astride his secondary stage, the flannel and denim his dancers wore at the campfire, and Timberlake’s verbal reminders that he hails from Tennessee and the South.

That said, he’s still an amazing performer. Few pop or rock stars pull off a falsetto so effortlessly, and not to belabor the point, but just watching those fluid and imaginative dance steps is worth the price of admission. Two of the best moves Friday were his hop and stop on his tippy-toes, a la Elvis Presley, and his quick jump up a step, tap-tap, then quick jump down a step, tap-tap, maneuver.

Timberlake launched the concert with «Filthy» and by song four was bringing «SexyBack». He switched from swagger to suave for «Suit and Tie» ditching his fringe leather jacket for a suit (but no tie) atop a Johnny Cash T-shirt.

Smoke covered the three stages as Timberlake belted out «Cry Me a River». Does he still think about Britney Spears when he sings it?

The one-time Mickey Mouse Club member did a shot of liquor with his band before «Drink You Away», a song that’s got Memphis soul and a kiss of country. Timberlake stayed largely acoustic for «What Goes Around … Comes Around», which could have used some synth and strings to really pile on the emotion.

Timberlake’s voice and phrasing struck a strong tone on his Chris Stapleton collaboration «Say Something», with its chorus of «Sometimes the greatest way to say something is to say nothing at all».

«Summer Love» and the feel-good show-closer, «Can’t Stop The Feeling!», excited the party-minded but well-behaved crowd.

If you missed the show, you’d be wise to snag a ticket for Timberlake’s return visit to PPG Paints Arena on Sept. 25.