The Man Of The Woods Tour, Philadelphia, PA, EE.UU. +9 imágenes 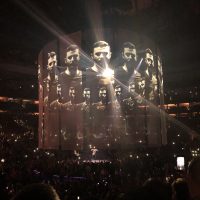 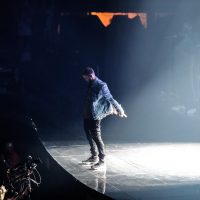 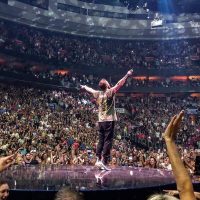 The Inquirer — Ancient concert-going etiquette dictates that you should never attend a musician’s show wearing that musician’s gear. If there’s one person who can get away with this, it’s Justin Timberlake, who spent a good part of his Saturday night in South Philly rocking a denim jacket embroidered with his own logo.

The sparse symbol, an etching that wouldn’t look out of place burnt into the cover of an evil book in a horror movie, contains the letters MOTW — Man of the Woods, the pop mainstay’s most recent album. Timberlake would later change into a MOTW T-shirt you actually can buy off his website for $45 (the phrase is trademarked, of course).

Over a long career, the 37-year-old has excelled as an artist, but also as a marketeer — hawking his merch, sure, but also his sound, a streamlined shopping cart of influences that rarely suffers a wobbly wheel. It seemed to sell very well in Philadelphia, devoured by a keyed-up Wells Fargo Center light years louder than the last time I was there: May 7, for Game 4 of the Sixers-Celtics series.

The Man of the Woods tour, here for the final date of a 36-show opening leg before storming Europe, is heavy on the new stuff, in both set list and stagecraft. Timberlake opened with recent single «Filthy», his live band the Tennessee Kids leading with tension-building guitar licks that melted into an electro-funk throb built by frequent collaborator Timbaland.

Working both the main stage and a tree-lined walkway that snaked out like a wonky question mark, Timberlake strutted the expanse in a pair of extremely expensive-looking LeBrons, offering a few more new songs before dropping his first big hammer: «SexyBack», which whipped the sizeable with-you-since-*NSYNC audience into hysterics.

The 2006 FutureSex/LoveSounds smash represented, back then, a major shift for the singer, from the crisp, high-gloss R&B of Justified to a more genre-bending sound. A dozen years later, Timberlake is attempting to make another move, this time back to Rocky Top. The Tennessean infused a significant country edge into Man of the Woods, through both the songwriting and instrumentation.

It’s been successful on the radio, but the jury is still out on whether it’s been truly embraced by his core ticket buyers. His performance of the new album’s title track, especially following «SexyBack», seemed to deflate the mood. Then he hopped behind a piano, banged out of the first few notes of «Senorita», and puffed it right back up. This set off a firecracker string of hits, starting with «Suit & Tie», which saw the nimble, committed Timberlake jive solo with a Day-Glo microphone stand rigged to lean and rock with him, a fantastic sort of high-budget shout-out to the broom scene from Breakin’.

Borrowing one of Kanye West’s most effective live signatures,Timberlake later gathered himself in front of an MPC drum machine, hit with two spotlights as he addressed the crowd. «This is off the dome! We in Philly, so I’m taking it back», he announced. Beanie Sigel? Teddy Pendergrass? Hall & Oates? Not quite: He tapped a button and triggered an a capella of The Fresh Prince of Bel-Air theme, chopping Will Smith’s sing-songy bars into the cascading synths that open «My Love». They loved it.

After a tremendous, seat-shaking arena-rock rendition of «Cry Me a River», which saw the translucent projection banners billowing from ceiling cascade with fat drops of CGI rain, Timberlake slowed down the pace considerably, pouring out shots for his musicians («We got a saying where I come from. Friends don’t let friends drink alone») while acknowledging them, especially the prolific percussionist Brian Frasier-Moore, a Philly native.

Later, an acoustic-armed Timberlake perched with his crew around a mock campfire on the opposite end of the floor, paying more deference to his «not-so-backup singers» by hyping up a series of brief but impressive solo snippets from his vocalists, who covered Fleetwood Mac, Lauryn Hill, the Beatles and John Denver. The tonal shift also allowed Timberlake to slide into other new singles, including the folksy, solemn «Flannel» and «Say Something».

The latter hit — inspired by his experience with a Philadelphia magazine journalist — is one song I find weirdly emblematic of what is still Timberlake’s most questionable move to date: idling by after his controversial 2004 Super Bowl halftime show with Janet Jackson, sidestepping criticism of his role in the stunt while his fellow superstar was essentially blacklisted from the music industry. (Timberlake was even invited back to sing again at Super Bowl LII, which you might have watched.)

What sounds like a neo-woke anthem in passing is actually an extremely well-produced sonic version of a shrug if you really listen to the lyrics. Sometimes the greatest the way to say something is to say nothing at all, goes the refrain from the duet, written and recorded with crossover country star Chris Stapleton. I don’t wanna get caught up in the rhythm of it. We know you don’t, Justin — that’s how you’ve maintained this buoyant run, while Janet is just starting to make her way back.

In fairness, a mishandled PR nightmare from 14 years ago should not come to define Timberlake, or any artist, but it should be noted as a career calculation that allows a song like «Can’t Stop the Feeling!» to exist. His number one hit from the Trolls soundtrack, which he rolled out at the very end of his Philly show to a rapturous response, is an all-ages, mom-friendly wedding jam that offends no one. Nice work if you can get it. Timberlake, a deeply gifted performer who reads the room better than anyone, got it, and he ain’t letting go.

After relaxed night in the ‘woods’ at Philly’s Wells Fargo Center, Justin Timberlake can get back to work

The Morning Call — On his previous tours that stopped in Philadelphia, Justin Timberlake was a hard-working performer.

He wanted to be Justified. He was bringing sexy back. And he was putting on his suit & tie to be taken more seriously as an entertainer.

But Saturday’s stop at Wells Fargo Center was the last stop on the first leg of the tour to promote his new album, «Man of the Woods». And as the title of that disc suggests, Timberlake — now a father who’s edging toward 40 — apparently wants to kick back and enjoy life.

And while Timberlake is so supremely talented and now has such a collection of hits that his shows virtually can’t miss, that approach ultimately made for a less compelling concert than his previous stops.

Let’s put that in context: Timberlake’s show was just under two hours, contained 23 songs by him and four others by his backup singers and had pretty impressive staging (including an actual campfire on stage; more about that later).

And if that sounds entertaining, it was — as the often-euphoric, nearly sold-out crowd would happily attest.

But there were some parts of the show that seemed like obviously stretches and actually put a damper on its momentum. And others where Timberlake didn’t sing parts of his biggest hits.

And occasionally the huge production — presented in the round, with stages and runways amid a half-dozen trees (Man of the Woods, get it?) — buried the singer.

The show clearly focused on Timberlake’s new disc — he performed nine of its 16 songs — and the more relaxed attitude it’s meant to convey.

He opened with the disc’s first song, and first single, «Filthy», it’s deeply thumping groove a good choice to get things started, and before the second song, the disc’s «Midnight Summer Jam», told the crowd, «Philadelphia, let’s dance!»

But Timberlake’s catalog hits seemed better than most anything from his new disc.

An early offering of his gold «LoveStoned» (Timberlake leading his 11-member band like James Brown with breakdown shouts of «Two times! Three times!») followed by the triple-platinum «SexyBack» — wildly energetic, and good — was better than the juxtaposed «Man of the Wood» and «Higher Higher» — even when grass literally sprung up at Timberlake’s feet on the former.

But Timberlake too frequently gave those earlier hits less attention. «Senorita» had him on a keyboard that slowly spun so the whole arena got a look. «Suit & Tie» could have done without the interpretive dance segment or the proclaimed «light show» of crisscrossed lasers that surrounded him at the end.

And «My Love» could have done without the recitation of the «Fresh Prince of Bel Air» theme song before it. (That’s really getting old, guys). Worse, Timberlake barely sang on it, letting the background singers carry it. He similarly barely sang on «Cry Me a River», instead telling the crowd from an impressively fog-covered stage, «Sing, Philadelphia!»

Timberlake was far better when he was invested in the song rather than in the production. That made his triple-platinum hit «Mirrors» the best song of the night: Having shed his denim jacket for a T-shirt, he sang — really sang, as if it meant something. At the end, he finished from his knees, and told the adoring crowd, «Thank you, Philadelphia, I love you».

The songs from the new album were less memorable. After drinking a toast to the end of the tour leg with the whole band on the center stage before «Drink You Away» from his last disc, «The 20-20 Experience — 2 of 2», an acoustic «Flannel» around the aforementioned campfire was undistinguished. Same for the slow, nice «Morning Light».

Better was his latest single, «Say Something», which he played on acoustic guitar, and on which he seemed very much invested.

But it didn’t help the show’s momentum that it was split at that point by a five-minute film about couples’ love, or that — again around that campfire — after a pretty good but too-short «Until the End of Time», Timberlake had his four background singers each perform a cover song.

While the singers did well on Fleetwood Mac’s «Dreams», Lauren Hill’s «Ex Factor», The Beatles’ «Come Together» and John Denver’s «Thank God I’m a Country Boy», it took up eight more minutes without Timberlake singing.

Timberlake wound down the show with a mix of older hits and new songs. A good «What Goes Around … Comes Around» followed by him on acoustic guitar on his newest single, «Say Something», in which he clearly was more interested.

He also put more into the new disc’s «Montana», but it’s a lesser song. His platinum hit «Summer Love» was strangely muted, and his first gold hit «Rock Your Body» was far more about the synchronized dance moves than Timberlake’s singing. The new song «Supplies» had him spin-dancing among the trees.

Timberlake closed the show — there was no encore — with his breakthrough solo hit, 2002’s «Like I Love You», then into what has become his biggest hit, the quadruple «Can’t Stop the Feeling!»

That song is a natural show-closer, but Timberlake also performed it for all it was worth: A joyous celebration of life — and, at the same time, his talent and artistry.

That was the Timberlake that became such a big hit. Now that he’s relaxed a bit, it’s time for him to come out of the «woods» and get back to work.

Opening act The Shadowboxers, the pop-band proteges that Timberlake discovered and signed them to his Villa 40 artist-development label, gave a pleasant seven-song, 30-minute set.

In fact, the six-man group from Atlanta often sounded like Timberlake, with its radio R&B song «Wolves» and falsetto-filled «Brakes». It even, as Timberlake did early in his solo career, appropriated Michael Jackson, covering (pretty well) Jackson’s «Remember the Time» and Prince on its closing «Hot Damn!»

And it frequently fell into the synchronized dance moves of boy bands past such as ‘NSnyc.

None of that is criticism: It all worked, and the group was pretty entertaining.