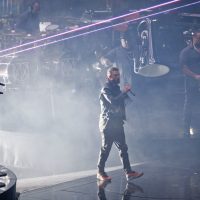 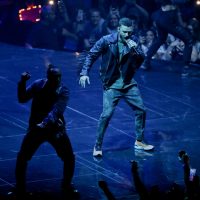 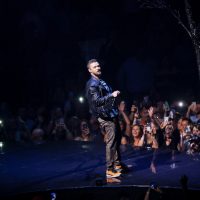 Tulsa World — «I have never had a bad night in Tulsa. Ever».

Justin Timberlake, who said those words Saturday night, kept the streak alive with not just a concert, but a show (there’s a difference) at the BOK Center.

How many opportunities has Timberlake had to have a bad night in Tulsa? Only his travelogue knows for sure. But history confirms he performed at the BOK Center in 2013. And, five years later, he can update update his LinkedIn profile if he chooses to do so.

A global superstar with Tennessee roots, Timberlake titled his fifth and newest album «Man of the Woods». He said in a promotional video for the Man of the Woods tour that the outdoors is the inspiration for a lot of his new songs.

He said in the promo video that bringing the «outside in» is a goal of the tour. «How can we bring that to life?» he asked.

Mission accomplished. Timberlake and his tour planners did it. Thanks to props, visual effects and creative extensions of the stage, the BOK Center was, at times, the great outdoors.

The stage was linked to walkways that looked like nature trails. The trails meandered from one end of the floor seating area to the other, permitting Timberlake and his tour mates to get intimate with many fans along the way. Faux trees were part of the scenery. (Award clever points to Chris Hardy, owner of the Book Exchange in Pryor, who suggested a tree at the BOK Center could have been a Joshua Tree left over from a U2 concert Wednesday).

At one point in the show, a guitar-toting Timberlake and his backup singers gathered around a campfire at the opposite end of the floor from the stage.

«Where I’m from, we like to sit around the fire and tell our stories», he said, inviting his backup singers to take turns doing covers of songs by Fleetwood Mac, Lauryn Hill, the Beatles and John Denver.

Also during the campfire segment of the show, Timberlake invited those in the crowd to use cellphones to illuminate the arena. The shining lights of the phones resembled stars in the sky above the campfire. But, if you really want to know what a star looks like, just lay eyes on Justin Timberlake.

Timberlake and his entourage (band, dancers, backup singers) made a dramatic entrance a little after 9 p.m. He walked out, casually and confidently, like he owned the place and, for a couple of hours, he did.

Timberlake has enough swagger that he could have done a traditional stage show and still wowed his admirers. But you can put him in the category of performers who take the stance of, hey, if you’re going to invest your money in a ticket, I’m going to reciprocate by going all out — physically and technologically.

«Ya’ll really came to party tonight», Timberlake said at a high-energy point of the show.

Timberlake gold like «SexyBack», «Cry Me A River» and the show-closing «Can’t Stop the Feeling!» were of course on the set list, but so were nine songs from «Man of the Woods». (The album title has something to do with his son’s name. Google it.)

Donny and Marie Osmond (bringing them up for a reason, really) were a little bit country and a little bit rock and roll when hosting a television variety series in the 1970s. In this millennium, Timberlake is a little bit woodsy and a little bit funky. If you heard all the squeals at the BOK Center, you know it works for him.

Tulsa World — Is anyone cooler than Justin Timberlake?

Is anyone else even close?

«He was in the Mickey Mouse Club. How can you be close?»

Why is he cooler than everybody else?

«Well, he dated Britney Spears. He is married to Jessica Biel. And he can dance better than anybody else. He has got it all».

This was a conversation that took place outside the arena before Timberlake performed Saturday night at the BOK Center. Timberlake graced a BOK Center stage five years ago and he returned to Tulsa because he’s touring in support of his fifth album, «Man of the Woods».

«Tulsa, what’s up?» Timberlake shouted before singing the title track from the album. «Welcome to the Man of the Woods tour 2018. Did you come to have a good time tonight? Cinco de Mayo!»

Timberlake took the stage a little after 9 p.m. and, joined by his entourage, performed on a stage that winded, like a nature trail, though all parts of the floor seating area. The «trail», complete with faux trees, allowed him to be up close and personal with more of his fans, who roared in approval at his showmanship.

Donaldson had commuted to the tour stop from Fayetteville, Arkansas, with Holly Culver, who agreed with her friend that nobody is cooler than Timberlake.

«He can sing. He can dance. He’s an actor. He does it all», Culver said. «There’s not a lot of people who can do it all and do it really well».

Timberlake’s appeal is such that among those spotted walking into the arena was state senator and former University of Tulsa football coach David Rader and wife Janet. Said the legislator: «He’s very talented and he’s not stuck on himself and seems to have a lot of fun».

Timberlake seems to ooze cool, whether he’s charming crowds like the one at the BOK Center or guest-starring on «Saturday Night Live» and fitting in so naturally that he feels like he’s a cast member. It is because of his cool factor that informal polling continued outside the BOK Center before his show.

Rader couldn’t immediately think of anyone cooler than Timberlake. Prince was cooler, according to Lisa Harper of Broken Arrow. And Elvis was probably cooler too, she added. But Justin Timberlake is her favorite artist in the here and now.

«This is the only concert on my bucket list, probably», she said.

Harper said she paid more for tickets — $1,250 for two front-row seats — than she has ever paid for any concert. (She paid $138 for a pair of tickets to a recent Judas Priest concert at the BOK Center.)

«It was worth it», she said. «This is like a birthday present to myself». Her birthday is in July.

Harper brought her longtime friend Lisa Mantich of Tulsa to the show. Mantich was treated to her first BOK Center concert. She said she had only been to the 10-year-old arena once before and that was for a hockey game.

Like Harper, Mantich is a Justin Timberlake fan. Anybody cooler than him?

«What about Bruno (Mars)?» Mantich said.

«Not for me», Harper said. «Justin Timberlake for me».

When the «is-anybody-cooler-than-Justin Timberlake» topic was pitched to Julie Jameson, she said, «Beyonce is the only one I can think of». Her husband stood out from most of the pre-concert crowd because of his attire, but even someone wearing an AC/DC shirt can appreciate Justin Timberlake. «Oh sure», he said. «Talented guy».