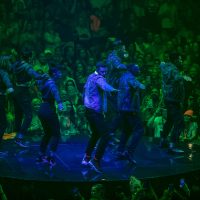 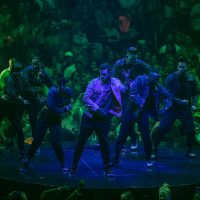 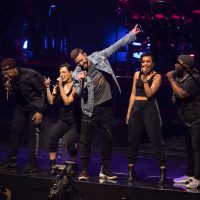 Tampa Bay Times — Justin Timberlake had to be sweating long before he let it show.

He must have been drenched beneath his scruffy denim jacket, given all the heated hoofing he laid to the stage at Tampa’s Amalie Arena Tuesday night, even if his inscrutably straight-laced face betrayed nothing but cool.

But when he did finally strip down to a T-shirt, revealing all the perspiration that goes into being perhaps his generation’s premiere song-and-dance man, it was clear just how much work still goes into being J.T.

Debate, if you like, Timberlake’s standing on the modern pop food chain since his last Tampa gig in 2007, and especially since his post-Y2K prime. But the man did headline this year’s Super Bowl, and he remains a Very Big Deal across America: Monday’s show at the Amway Center, the hometown of Timberlake’s old boy band ‘N SYNC, was the venue’s highest-grossing concert ever, raking in nearly $2.4 million.

Amalie was packed to the gills — the arena announced a crowd of more than 19,000, Timberlake himself pegged it at a weirdly specific 15,020. Either way, with all the screaming by fans who were probably grew up with ‘N SYNC, it sounded extremely sold out..

«Is that how we’re feeling in Tampa Bay tonight?» Timberlake shouted. «Wow. You know I used to live right down the road. And it doesn’t matter what day of the week — it could be a Tuesday, that’s how they get down in Tampa. Y’all came to party tonight, huh?»

And what an audio-visual experience Timberlake gave them. This was the stage of a superstar, the sort of architectural and technological wonder only an A-lister can demand: An onyx curlicue snaking across the arena, lined with fake trees and a working bar encircling a small stage at the center, accessible only to VIPs. Rising and falling from the rafters were some three dozen banners that doubled as projection screens, which, coupled with the nearly arena-wide screen, meant everyone got a pretty great view of J.T. Add in a 15-piece backing band and six dancers, and the effect of it all was immersive, almost VR-like if you lucked out and got a seat down low.

Timberlake, 37, worked every inch of that stage and them some — he ventured down to the floor to dance on Rock Your Body — often in pop-and-lockstep with his dancers. His whinnying falsetto sounded no worse for the wear against the throbbing spasms of My Love and spritzy synthesizers of Cry Me a River, which saw the stage enveloped with a thick fog.

Timberlake chose songs judiciously from new LP Man of the Woods, a tentative wade into the foggy brackish of countrified future-pop. The bumpin’, throbbin’ Filthy and Supplies could’ve come from any point in his catalog. An acoustic set around an actual, honest-to-goodness campfire — the lowest-stakes pryo you’ve ever seen on a stage this big — let him dial back nicely on Flannel and a few covers spotlighting his backup singers.

But what was surprising was how well some of his suit-and-tie stuff still held up in his newfound L.L. Bean wardrobe. A strummy What Goes Around… Comes Around, from 2006’s FutureSex/LoveSounds, flowed seamlessly into Say Something, his recent Top 10 duet with Chris Stapleton. Montana melted right into 2006’s Summer Love, which itself kick-flipped right into mega-hit Rock Your Body.

Maybe a turn like this has been lurking in Timberlake all along. You could sense it in the steamy organs introducing 2002’s Senorita, a song mostly delivered toward the fans behind the stage (see, told you the show was all-encompassing). He strapped on an acoustic guitar and brought his singers and horns to the center of the catwalk for Drink You Away, a song with a soulful backwoods-blues tilt from 2013’s The 20/20 Experience.

Bless up to the Tennessee Kids for pumping these songs up to and beyond Timberlake’s level. His big band pumped in saxes, tubas, percussion and just the right amount of twang; every song got better when the band had more to do. Timberlake may or may not have succeeded in paying homage to his Memphis roots with Man of the Woods, but a better path was right in front of him all along: The band’s all-consuming soul on LoveStoned howled classic Stax.

The night’s final song, the thirsty, lightweight Can’t Stop the Feeling!, put a literal exclamation point on the party, with Timberlake and his dancers victory-lapping the stage and high-fiving fans between moves. It was an inevitable choice, given that it’s somehow become J.T’.s biggest hit, but also the wrong one.

No, closing honors should have gone to another song offered much earlier in the night. That would be Mirrors, the song where Timberlake finally let down his denim jacket and workhorse facade. The final chorus was a literal drop-the-mic moment: He set his microphone down at the center of the runway, basking in a choir of thousands singing every word back his way.

Timberlake bowed long and low and basked in the ensuing ovation as the crowd saw him sweating for the first time all night. Probably not coincidentally, it was also the first time he took a deep breath and really smiled.

Justin Timberlake – The Man of the Woods Tour

The Sarasota Post — Justin said, «I used to live down the road!» «So now this is how Tampa rolls on a Tuesday night?!» The Amalie Arena was filled to the brim coming to see the 37 year-old Timberlake strut his stuff! He brought along the Tennessee Kids to back him up. One of the big tours of the summer supporting Timberlake’s new album, «Man of the Woods».

Justin Timberlake at Amalie ArenaThe stage was set complete with trees. A walkway extended from the stage all the way across the arena with fans on the floor standing all around. From the moment Timberlake hit the stage, everyone was up out of their seats, standing & dancing for the entire show. He kicked it off with his top 10 single release of «Filthy» right into «Midnight Summer Jam» from MOTW. This album was written about Timberlake’s family as well as his love of the outdoors.

Live Music Amalie Arena Tampa, FloridaJustin Timberlake keeps the pace moving during the second half of the first set with hits like Suit & Tie, Sexyback, Cry Me a River and moving the entire band to center walkway for a killer rendition of «Drink You Away». He came back for the second set complete with campfire at the end stage to showcase the Tennessee Kids. Each of the singers took a lead singing around the campfire from a cover of Fleetwood Mac’s «Dreams» to John Denver’s «Thank God I’m a Country Boy», putting their own Memphis spin on the classic tunes with Justin strumming the guitar and singing background.

Photo by Vicky Sullilvan, Rock the Lens PhotographyIt was back to the stage and dancing for the last set. Using cell phones to his advantage, Justin tells the audience to light up the arena and 20,000 cell phones are in the air. The fans are into the new music, but they want to hear their favorite songs by Justin and by the time he gets to «Rock your Body» everybody is dancing in tandem. Justin dances solo center stage with a great light show accompanying his moves. It was electric and reminiscent of his musical hero, Michael Jackson. He closed the show with his mega hit, «Can’t Stop the Feeling»! There is no question that Timberlake is a superstar of his generation.

Opening act, The Shadowboxers are a trio pop band discovered by Justin and have now been signed to his artist development label. DJ Freestyle Steve kept the mix going while the crowd was arriving.