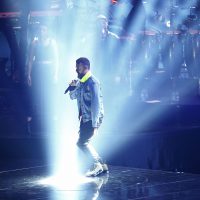 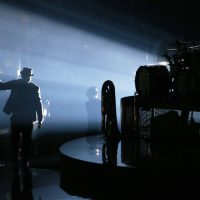 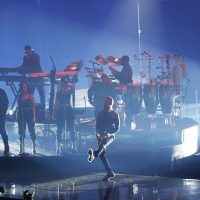 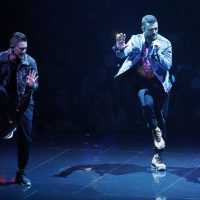 AZ Central — The catwalk snaked its way through Talking Stick Resort Arena, made to resemble a path in the woods, complete with trees. And there were plenty of breathtaking nature scenes projected on the scrims that dotted the arena.

There was even a campfire, which Justin Timberlake and a few of his Tennessee Kids sat around at one point toward the end of the concert — «sharing stories», as he called it.

Those stories just happened to be in the form of such crowd-pleasing covers as the Beatles’ «Come Together» and Fleetwood Mac’s «Dreams», with the superstar strumming acoustic guitar while his backup singers stepped into the spotlight.

But for all its rustic trappings, the Man of the Woods Tour felt more like a night at the club in downtown Phoenix than a trip to Payson, from the time the singer hit the stage, singing «Filthy», the opening track on the album for which the tour was named.

The man’s first shot of fame, as the fans were reminded this Monday thanks to a shiny new star on the Hollywood Walk of Fame, was as a member of NSYNC, among the most successful boy bands in the history of shrieking girls.

And he’s still got the moves. In fact, if anything, he’s only gotten better, as he proved repeatedly in the course of a heavily choreographed performance, flanked by a team of six dancers.

His sense of showmanship has also gotten stronger through the years. And the Vegas aesthetic he first explored on the 20/20 Experience World Tour has carried over into this year’s model.

The Tennessee Kids brought the feel of an old-school Vegas soul revue to the proceedings, complete with a four-member horn squad and four backup singers, who were used to brilliant effect in the show’s more gospel-flavored moments.

He wasn’t shy about shining a spotlight on «Man of the Woods». The first two songs of Wednesday’s concert were, in fact, the first two songs on Timberlake’s new album. And he made his way through seven more before the night was through.

But three songs in, he reached for «LoveStoned», during which he shouted «Phoenix, shake your a–« before taking it up a notch or two with «SexyBack».

After returning to «Man of the Woods» for the doo-wop-flavored title track and «Higher, Higher», the star led the crowd in a spirited call-and-response on «Senorita», the opening shot of a show-stopping trip through several of his most beloved hits.

«Suit & Tie» featured some of his fancier mic-stand work, followed by powerful versions of «My Love» and «Cry Me a River», Timberlake bringing the hit parade to a climax with «Mirrors».

He mentioned his family members «down the road in Scottsdale» as part of the show’s first lengthy interaction, noting that his family had a saying, «Friends don’t let friends drink alone» by way of setting up «Drink You Away», a soulful highlight of the set.

That gave way to the campfire songs, an odd departure he pulled out of with a soulful «Morning Light» from his new album.

The final stretch was pretty evenly divided be showcasing his latest music, including a rousing rendition of «Say Something», and dusting off the hits, including «Summer Love» and «Rock Your Body» back to back.

He even reached back to the song with which he launched his post-NSYNC career, «Like I Love You», before ending the night with a joyous rendition of «Can’t Stop the Feeling».

Setlist
Filthy
Midnight Summer Jam
LoveStoned
SexyBack
Man of the Woods
Higher, Higher
Senorita
Suit & Tie
My Love
Cry Me a River
Mirrors
Drink You Away
Flannel
Until the End of Time
Dreams
Ex-Factor
Come Together
Thank God I’m a Country Boy
Morning Light
What Goes Around… Comes Around
Say Something
Montana
Summer Love
Rock Your Body
Supplies
Like I Love You
Can’t Stop the Feeling